The St. Paul Warriors made a statement early and kept the lead over the FD Friars as the two top seeds met for a big-time Friday evening showdown of the IIAAG Boys Basketball League. 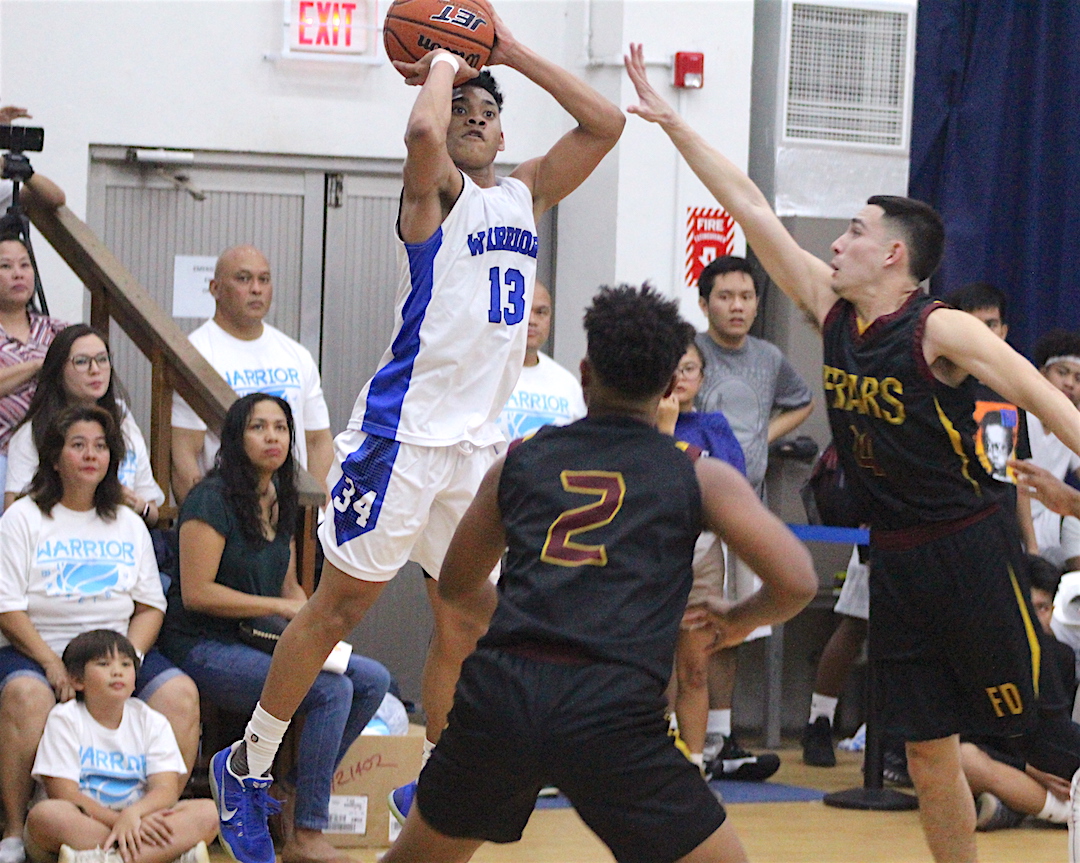 To be a champion, you have to beat a champion. The St. Paul Warriors were not to be denied on Friday Night’s big game against the FD Friars in the IIAAG Boys Basketball League. The Warriors led from start to finish, beating the Friars 66-53 in a battle of the unbeaten power house teams.

The league’s best backcourt duo of D’Angelo Gallardo and Jahmar White each scored 18 points to lead St Paul. The Warriors game plan was to contain the FD’s front court by keeping the ball out of the paint.

“We wanted to protect the paint; they have alot of big guys so we wanted to keep putting pressure on their guards,” said Gallardo.

The Friars looked to feed center DeAundre Cruz but the Warrior 2-3 zone defense proved to be effective as the Friar guards found it difficult to get the ball to their big man.

“This was a big game; it was a rematch from last year’s championship so it was important for us to set the tone for the rest of the season” said White. “One thing we learned was to keep our composure; they are going to talk and we are going to talk. We must keep our minds right when we meet again.”

There was plenty of rough play and smack talk throughout the game between the two rival teams.

“I guess you can say it’s a rivalry; it’s just two good teams going at it. But we are going to continue playing every game like it’s our last game ,” said Gallardo.

Warrior Jahmar White was explosive in the 3rd quarter. (photo by Robert Balajadia)

The Warriors came out strong leading the game 5-0 to open up the contest. White hit the first basket and teammate Josh Gatchalian swished a 3-pointer to go up early.

The Friars, on the other hand, had a difficult time finding their rhythm by missing open shots. The Friars managed to score a season low six points in the first quarter, Kyle Gaitan scored four points and teammate Mark Temerowski accounted for the other bucket.

A big chunk of the Friar offense came from Gaitan who scored 12 of FD’s 16 points by halftime. The Warriors led 26-16 by the break.

St Paul opened up the second half on fire with last year’s MVP Jason Diaz converting two baskets as they opened up a 36-20 lead. FD coach Eddie Pelkey went to sophomore sharpshooter Christian Taitano who sank two 3-pointers to cut the deficit to eight points.

The Warriors quickly regrouped and used good ball movement on offense to set up high percentage shots to go back ahead by 14 points in the fourth period. Gaitan tried to spark a comeback with an ‘and 1’ bucket but each basket was answered by either Diaz or Gallardo in the final period. The Warriors emptied their bench in the final minute as they celebrated a 66-53 victory to improve to 10-0.

Gaitan led all scorers 23 points and eight rebounds. Taitano scored nine points for FD as they drop to 7-1.

Jessie Martin hit a 3-pointer at the buzzer to help the St Paul Warriors JV team hand the Friars their first loss of the season.

“I knew time was running out and I needed to put up a shot,” said Martin as time was winding down. “I glanced at the clock and put up the shot hoping it would go in to help my team.”

Martin’s shot was two feet behind the three-point line and he barely got the shot over FD defender Raymond Castro as the shot banked in for the win as the buzzer sounded. The Friars were up by five points late in the fourth period but the Warriors came back to win 42-39 thanks to Martin’s shot.

Martin was in foul trouble but still managed to score 10 points, Jeffrey Labanza led the Warriors with 13 points. The Warriors keep their championship hopes alive in the JV division and improve to 9-1 for the season, FD falls to 7-1.

Kyle Camacho had 10 points to lead FD; Castro and Matthew Santos each scored eight points for the Friars.

Friar Kyle Gaitan gets to the basket for a first half bucket. (photo by Robert Balajadia)