WARRIORS RUN DOWN ISLANDERS TO GET INTO TITLE GAME

The St. Paul Warriors are headed back to the IIAAG boys basketball finals after running away to a 76-53 semifinals victory over the visiting JFK Islanders Tuesday evening. The Warriors amped up the defense to turn a close game into a large lead, out pacing the Islanders in the second half. 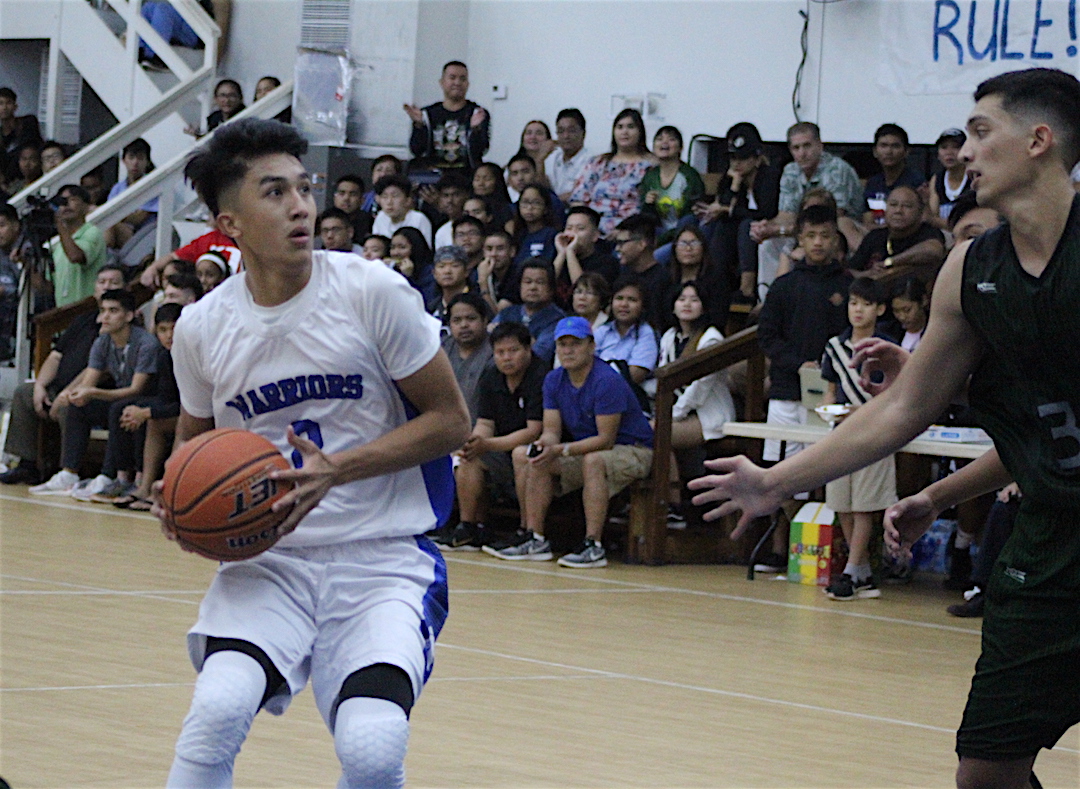 The St. Paul Warriors are headed back to the IIAAG boys basketball finals after running away to a 76-53 semifinals victory over the visiting JFK Islanders Tuesday evening. The Warriors amped up the defense to turn a close game into a large lead, out pacing the Islanders in the second half.

The St. John’s Knights defeated the FD Friars 52-50, setting up a Warriors vs. Knights finale.

Forward Jason Diaz consistently attacked the Islanders inside, finishing with a game-high 21 points. Guard Jahmar White added 17 and fellow big Josh Gachalian scored 15, including seven in the 4th quarter to keep the Islanders at bay.

JFK was led in scoring by Jonah Hahn and Jerry Ngireremang with 15 points.

“We worked so hard to get to this point and we played with a lot of heart. We wouldn’t have gotten here without our coaches,” said Diaz on the big semifinals win.

A fast paced 1st quarter played in heavy favor of the Warriors as both teams traded early buckets with St. Paul grabbing a 24-22 lead after a last second shot from Gachalian. The pace stayed consistent for the Warriors as they turned a 43-31 halftime lead into a 52-34 advantage midway through the final period.

JFK closed the 3rd quarter on a 9-0 run, and got as close as 56-46 after a Ngireremang three pointer early in the 4th. The Warriors would put their foot down on the defensive end as they pressed the Islanders at half court, making it difficult for them to feed Hahn. Hahn scored eight points in the 1st, but was limited to none in the 4th.

“Majority of their points came off second chance opportunities so we tried to limit their possessions slow it down the game. After we gained control, we really started to push the pace to extend the lead,” said White.

From there, Gachalian would start his personal run after getting an easy dish off an inbound pass from Diaz to further the lead 59-46. A put-back bucket from Gachalian kept the run alive 61-48, and ended on a Gachalian and-one to go up 64-48 with five minutes left.

JFK started to trickle in their third unit while facing a 20-point deficit as the Warrior crowd started the early victory celebration.

The Warriors return to the championship game means a third meeting against the St. John’s Knights after each game against them in 2018 was decided by a single possession or score. As far as title games go, the Warriors are ready to embracing the atmosphere on their biggest stage.

“It’s going to be fun,” said White on playing in the finals. “Whenever the crowd gets loud our boys just feed off of it so it’s going to be a great game and we’re looking forward to it.”

The FD Friars and JFK Islanders will face off in the consolation game at 5:30 at the UOG Field House while the Warriors and Knights will tip-off at 7 pm for the title.

Warriors D’Angelo Gallardo is quick on the break as he gets to the basket. (photo by Robert Balajadia)

Warriors Jahmar White converts on a late bucket to further the lead against the JFK Islanders. photo by Robert Balajadia)

JFK Islander Jerry Ngireremang gets a layup on the break. photo by Robert Balajadia)

Islander Cloyd Rosas looks for a pass as he gets into the lane. photo by Robert Balajadia)

Islander Alschae Grape attempts a shot from down town. photo by Robert Balajadia)