The St. Paul Warriors were in for a battle Tuesday evening as they defeated the Okkodo Bulldogs in a Taga Division showdown in the 2018 IIAAG Boys Basketball Season. 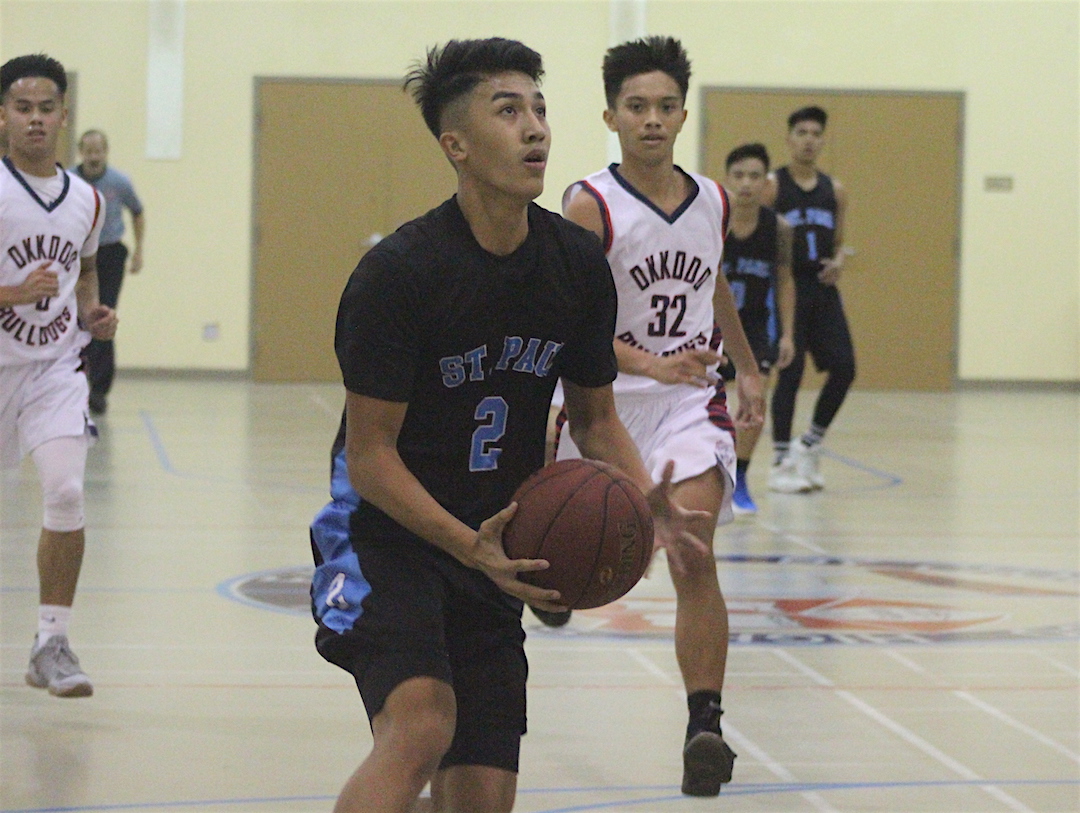 The St. Paul Warriors were in a dog-fight Tuesday evening with the home team Okkodo Bulldogs trying to defend home in a IIAAG boys basketball Taga Division showdown. The Warriors walked away victorious 76-65 after getting a big night from their regular work horses.

Leading the way for the Warriors was former league MVP Jason Diaz, scoring a team-high 19 points. Diaz was active on the boards and key on the defensive end, showing shades of the baller during his 2017 MVP campaign. Diaz had been in a slump starting from the pre-season, but Tuesday’s performance was just the jump start he needed.

“It’s been a tough time for the first few weeks, but today was a good start. I’ll get it back,” said Diaz on shaking off his slump.

The St. Paul backcourt played big as D’Angelo Gallardo added 18 and Jahmar White scored 15 to round out the Warriors top scorers. Okkodo got 15 points from guard Ruedel Galang and 14 points off the bench from Kevin Cabral.

Physicality was on the menu for both sides which didn’t stop or slow down throughout the games entirety. The Bulldogs didn’t shy away from the higher seeded Warriors but St. Paul rose to the occasion every time Okkodo would come close on the scoreboard.

“We just let them talk and we just let our play do the talking,” said Diaz on the in-game physicality.

St. Paul took their biggest lead in the 4th quarter after Diaz nailed a three from the top of the key for a 73-60 lead with four minutes left to play. The Bulldog offense struggled to keep up after the team went 1-7 from three-point range with three minutes to play, allowing the Warriors to control the closing minutes.

Okkodo took a 1st quarter lead after hitting an opening pair of three pointers, but Diaz and White both scored seven points in the period to control a 24-19 lead.

Bulldog Prince Enriquez went on a 6-0 run by himself in the final minutes of the 2nd quarter to will his team to a 39-34 halftime deficit.

Galang and the Bulldogs stayed right behind the Warriors as the team nailed three shots from down town, but still trailed 59-53 heading into the final period. White was filling the stat sheet in the 3rd after hitting a pair of jump shots, followed by two dimes to Jericho Perez as both teams traded buckets as the 3rd quarter closed.

Gallardo kicked up his aggressiveness in the 4th as he converted on two straight jumpers from the top of the key while also taking five trips to the free throw line where he knocked down 6-of-8 shots. Okkodo hit a cold spell down the stretch with center Christian Manalo being the only Bulldog to hit a field goal in the teams final three minutes.

St. Paul is trending in the right direction, but Diaz and the Warriors are still not feeling much like their championship selves just yet.

“We have to get better defensively. We’re going to focus on getter prepared mentally,” said Diaz.

Bulldog Antonio Crame gets a clean layup on a loose ball scramble. (photo by Robert Balajadia)

Bulldog Christian Manalo takes advantage of a mismatch for a bucket in the second half. (photo by Robert Balajadia)

D’Angelo Gallardo gets in the lane for two points. (photo by Robert Balajadia)

Jason Diaz reads the defense before penetrating early in the 1st quarter. (photo by Robert Balajadia)

Kevin Cabral hits a corner three pointer to give the Bulldogs a spark off the bench. (photo by Robert Balajadia)