ALL-STARS: RAPTORS AND MUSTANGS PLAY TO A TIE

First time ever the game ends in a tie! 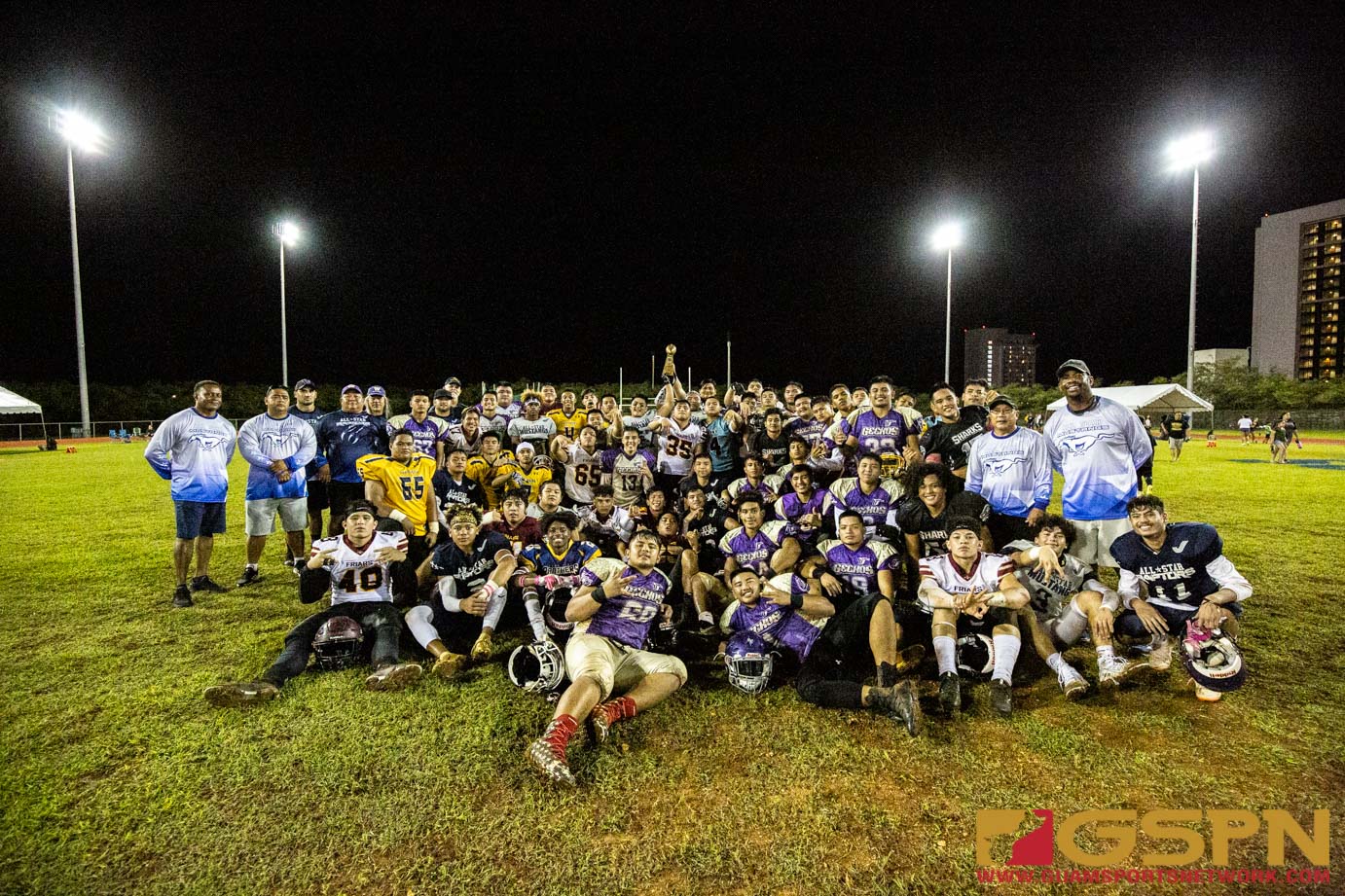 The 5th Annual GSPN Triple-J All-Star Game turned out to be another success, as Guam’s high school football talent got the chance to showcase their skills and play against fellow teammates while also becoming teammates with players from around the league who they battled with throughout the season.

It’s safe to say that no one knew how this game would play out. Both rosters were strong at each position, and as expected during an exhibition match like this, players would be out of their usual positions which made for an interesting matchup. The highly anticipated game ended in a tie at 12-12 with all scores taking place in the first half of action.

Strength and conditioning coach Chad Ikei, who has trained hundreds of NFL athletes and has developed some of the fastest NFL Draft prospects each year, was in attendance at the game for the third consecutive year and received a round of applause by the local community in attendance. In the three years that Ikei has held clinics on island, he’s helped Guam athletes get recognized in their transition from high school to college football.

A 71-yard breakaway touchdown run by Mustang Kein Artero (FD) and a 69-yard TD interception by Raptor Mykai Blas (GW) highlighted the game and both players would earn Player of the Game Honors for their exciting plays and performance.

The Raptors got the first opportunity to strike on offense after a kickoff return by Defensive MVP Noah Quichocho (GW) put the Raptors at the 40-yard line.

The first play of the ballgame for the Raptors resulted in a penalty. A delay of game call pushed the Raptors back on their first possession on a drive that would end in a fourth and six situation. The Raptors went for it on fourth down, a strategy that both teams would implement throughout the game.

The Raptors could not pick up the first down, and the Mustangs took over at their opponent’s 45-yard line. Mustang Evan Brown (FD), who played defensive end for the Friars all season, would line up under center as the quarterback for the Mustangs at a position he has not played since youth.

While it took Brown a while to find a rhythm, he showed what he could do at QB when he connected with WR Jalen Thatch (Guam High) for a 37-yard TD bomb on a fourth and long situation.

The Mustangs attempted for a two-point conversion after the score but were unable to convert. Nonetheless, the Mustangs took the first lead of the game, up 6-0.

The next score of the game did not take place until the second quarter of action. In the meantime, the crowd was entertained by trick plays from both teams and by linemen like Raptor Ethaniel Cali (GW) getting the chance to bulldoze defenders running the football.

Raptor quarterback Travon Jacobs (Guam High) tied up the game in the second quarter, after throwing across his body for a 20-yard touchdown pass to wide receiver Nico Velez (JFK). The Raptors also went for two but failed to convert and the game was tied at 6 apiece.

Artero scored his lone touchdown on a 71-yard breakaway run. On a run to the outside, Artero broke the tackle of one defender then was off to the races. He outran the rest of the Raptor defense which put the Mustangs up 12-6. The Mustangs went for the two-point conversion which was no good. Artero credited his line for setting up the score.

Defense proved efficient for the Raptors and ended up tying the ballgame before the half. Blas made the right read and picked off Brown, going all the way for a 69-yard TD interception. Blas elaborated on his all-star game experience and on scoring the TD that tied the game,

“I played an unfamiliar position, but it was fun going out and being able to execute. This was my first year in the all-star game and it was awesome to get the exposure from upperclassmen from around the league. It was a great feeling being able to come out and play in this game, and scoring a touchdown was also an awesome feeling,” said Blas.

Both teams struggled to gain offensive momentum in the second half of action and the game became more defense oriented. The nonchalant demeanor of the exhibition game got a little more serious in the closing half as neither team wanted to lose the ballgame.

In the second, Brown got the chance to showcase some of his defensive talent playing at his accustomed position of defensive end. He was able to force a fumble and recovered the ball for the Mustangs.

Defensive MVP in Quichocho also showcased some defensive skills, coming up big with a sack for a seven-yard loss in the third quarter and also by suffocating the Mustang run game.

Both teams were in good spirits following the end of the game and were happy to end the game in a draw. For all-star games there is no overtime.

With this being Artero’s last football game in high school, he elaborated on what this game meant to him and what’s next for him,

“It was an amazing feeling playing against my teammates and also being able to meet new players from different teams. Hopefully this won’t be my last time playing football, I’m going to try and play college ball.”