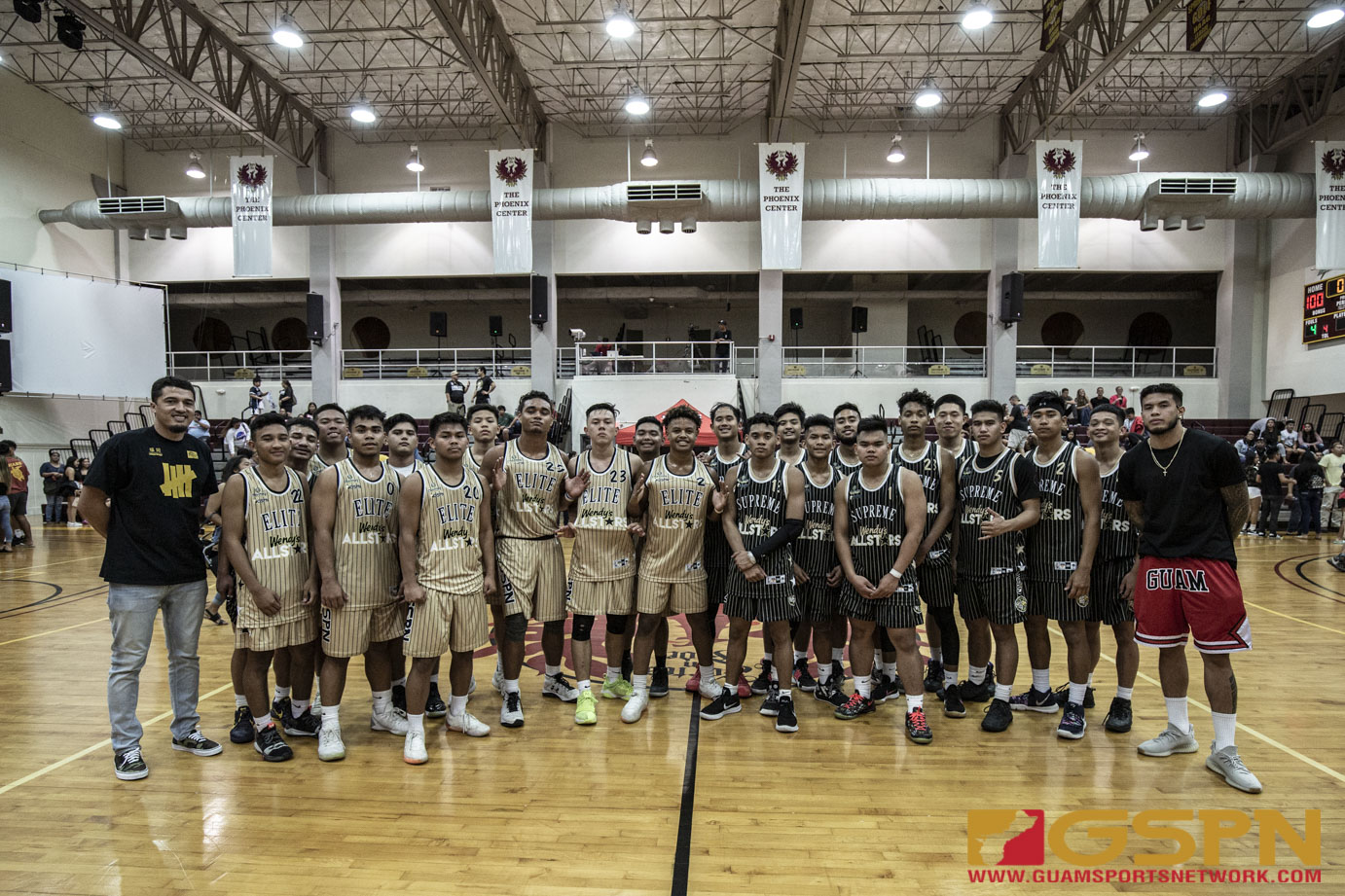 Tony Quinene (FD) from Team Elite led all scorers with 22 points and was pivotal in a 16-5 run in the third quarter. “We had a little four point lead at halftime. We talked in the huddle and decided to keep going and blow this thing open. They weren’t ready for it,” said Quinene.

Elite point guard Thelo Orichiro (St Paul) orchestrated the run after halftime, dishing out three assists during the run that Team Supreme was unable to recover from. “I told everyone that if we play good D (defense), the offense would come,” said Orichiro.

Orichiro played against fellow Warrior teammates Jahmar White and Reo Aiken from Team Supreme and his victory was icing on the cake after an IIAAG championship. Orichiro had 16 points, seven assists and two steals in the contest for the Elite squad.

Team Supreme set the tone early behind White and Aiken to go ahead 40-33 in the second quarter. Aiken was hot from behind the arc, draining three 3-pointers as Supreme looked to pull away.

Team Elite got a huge boast off the bench from Westbrook Concepcion (Tiyan) in the second quarter to take their first lead of the game. Concepcion scored five points in a matter of seconds after making a 3-pointer and then a steal for an easy lay-in to go up 43-42.

Elite never looked back with big man Lawrence Tisalona (JFK) protecting the rim on defense and also draining a 3-pointer which got the Elite bench and coach Willie Stinnett on their feet.

Christian Leon Guerrero (FD) and EJ Cruz (Southern) also made 3-pointers in the second half to prevent any come back from Team Supreme.

After suffering a loss in the IIAAG championship game to White and the Warriors, Quinene (from FD) said he had a little friendly trash talking against his rival.

“I was talking trash to Reo,” said Orichiro. “We were teammates but not on the court tonight,” joked Orichiro. “It was a great game and I had fun.. thank you to Wendy’s, GSPN and all the other sponsors that make games like this happen.”

Supreme guard Dale Bautista (Okkodo) said despite the loss, it will be an experience he will never forget.

“We all worked hard to get here and to share the court with all this talent is an honor,” said Bautista. “My advice to the next generation is to continue working hard all year long and you will be part of a special game like this,” said Bautista.

For Team Elite, Tisalona and Chris Morikami (both from JFK) scored 12 points apiece. Concepcion also had 12 points, Cruz chipped in 11 points in a balanced Elite offense.

Team Elite’s Tony Quinene shoots from beyond the arch while Team Supreme’s Jahmar White looks on. (photo by Bout It Productions)

Hendrix De Fiesta hit the go-ahead 3-pointer to give the Public School GDOE team a thrilling 55-54 victory over the private school IIAAG team. Hendrix’s shot was from NBA three-point distance that got the crowd going crazy.

The IIAAG led for the entire contest until the last seconds of the game with St Paul’s Xander Sanchez and St John’s guard Xander Kamai leading the offense.

The private school kids led by as much as 14 points with head coach Eddie Pelkey controlling momentum. The public school team, guided by head coach Brent Tipton, stayed within striking distance and slowly chipped away at the lead in third quarter. Justin Lizama (Jose Rios) and Kayjay Martin (FBLG) made plays on both sides of the court to keep the public schools in the contest.

Aaron Johnson (Anderson) helped the private schools maintain a slim lead but good free throw shooting by the public schools within a possession from taking the lead. A bucket by Jaden Santos (St Paul) was countered by Ashle Arbolida (FBLG) with less than a minute remaining and the private schools were clinging to a one point lead. Kamai hit 1-of-2 free throws with less than 20 seconds left before the clutch shot by De Fiesta to put the public school up 55-54.