GECKOS ERUPT FOR 40 IN WIN OVER PANTHERS

After an unexpected BYE last week, the GW Geckos looked strong on both ends against the visiting Guam High Panthers. 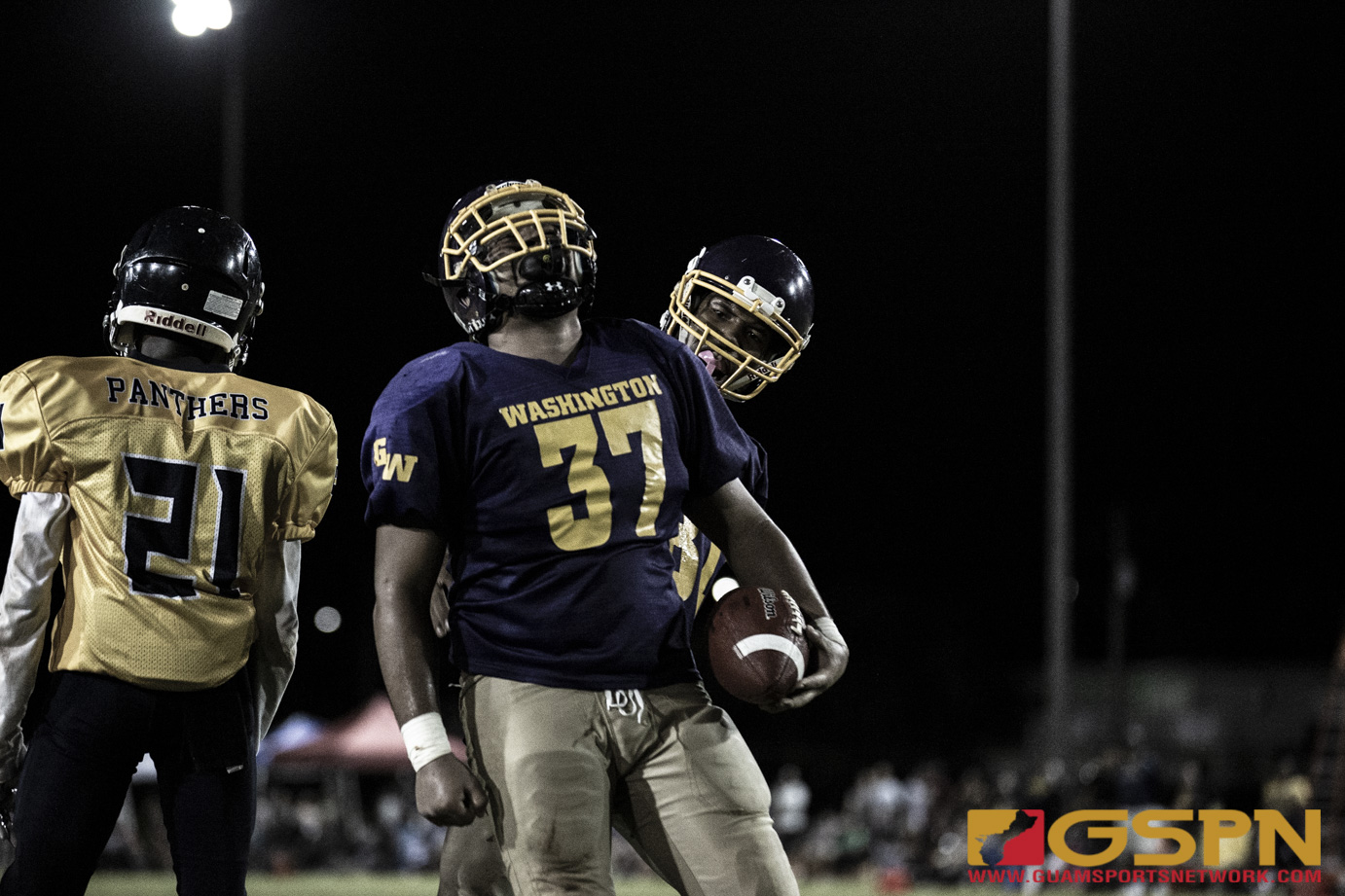 The George Washington Geckos are back on the win column in the IIAAG Football League with a 40-7 victory over the Guam High Panthers at the GW Field. The Geckos got off to a rough start in Week 1 and had a bye last week but came back strong in Week 3 to get the home win to improve to 1-1 for the season.

The Geckos scored on their opening drive with running back Eian Naputi scoring on a 13-yard touchdown run. The red zone score was set up by a 30-yard reception from quarterback Cason Jackson to receiver Brendyn Cruz.

“We wanted to come out tonight and rebound from our big loss to FD,” said Jackson. “Our coaches told us after the first game that we will get better and tonight’s win is the result of hard work.”

Cruz had the hot hand in the first half, catching a 15-yard touchdown pass from GW’s other quarterback Ricky Macias to put the Geckos ahead 23-0 at halftime.

The Geckos continued to run the football and went ahead 30-0 after a four-yard score from fullback Keanu Gray. The Geckos were looking to score again but a one-handed interception by Panther Jalen Thach ended the drive.

The Panthers finally got the breakout play they needed with Jacobs finding Thach for an 82-yard touchdown to start the fourth quarter.  Thach duplicated his feat last week against the Friars with a touchdown and an interception in the same game.

GW countered on the ensuing possession with another Naputi score from 5-yards out followed by a 2-point conversion run from Jackson to go up 38-7.

The Panthers had one final drive but Jacobs was saked in the end zone by Noah Quichocho to end the contest with a final score of 40-7. Quichocho anchored the GW defense with 1.5 sacks for the contest. Jonahs Gumabon led the Geckos with five total tackles; his brother Cylar Gumabon had two tackles from behind the line of scrimmage.

Jacobs had a rough night until the final quarter with 102 passing yards (3-for-9 completions) and a touchdown. Izaak Castro rushed for a team high 33 yards on four carries, Jayson Jackson rushed for 24 yards and had one reception for six yards. Thach had one catch for the 82-yard touchdown.

Keefe recorded 4.5 tackles on defense for Guam High, Shawn Gatchell contributed four tackles including one tackle for a loss. After an impressive opening night victory, the Panthers fall to 1-2 for the season.

Macias was perfect from extra point attempts going 4-of-4, he also completed 2-of-3 passes for 54 yards and touchdown pass. Naputi had nine rush attempts for 75 yards and two touchdowns, Mykai Blas contributed a seven yard rushing touchdown for GW.

Cruz had four receptions for 90 yards and a touchdown – all in the first half.

“It feels good to contribute to my team and I owe it all to my coaches and teammates who helped me,” said Cruz.

“Im glad we did good tonight after we made a lot of mistakes in our last game (against FD),” said Naputi. “We can do anything if we put our mind and our hearts into it.”