The regular season wrapped up at Guam High with the Panthers defeating the Dolphins to finalize the playoff matchups. 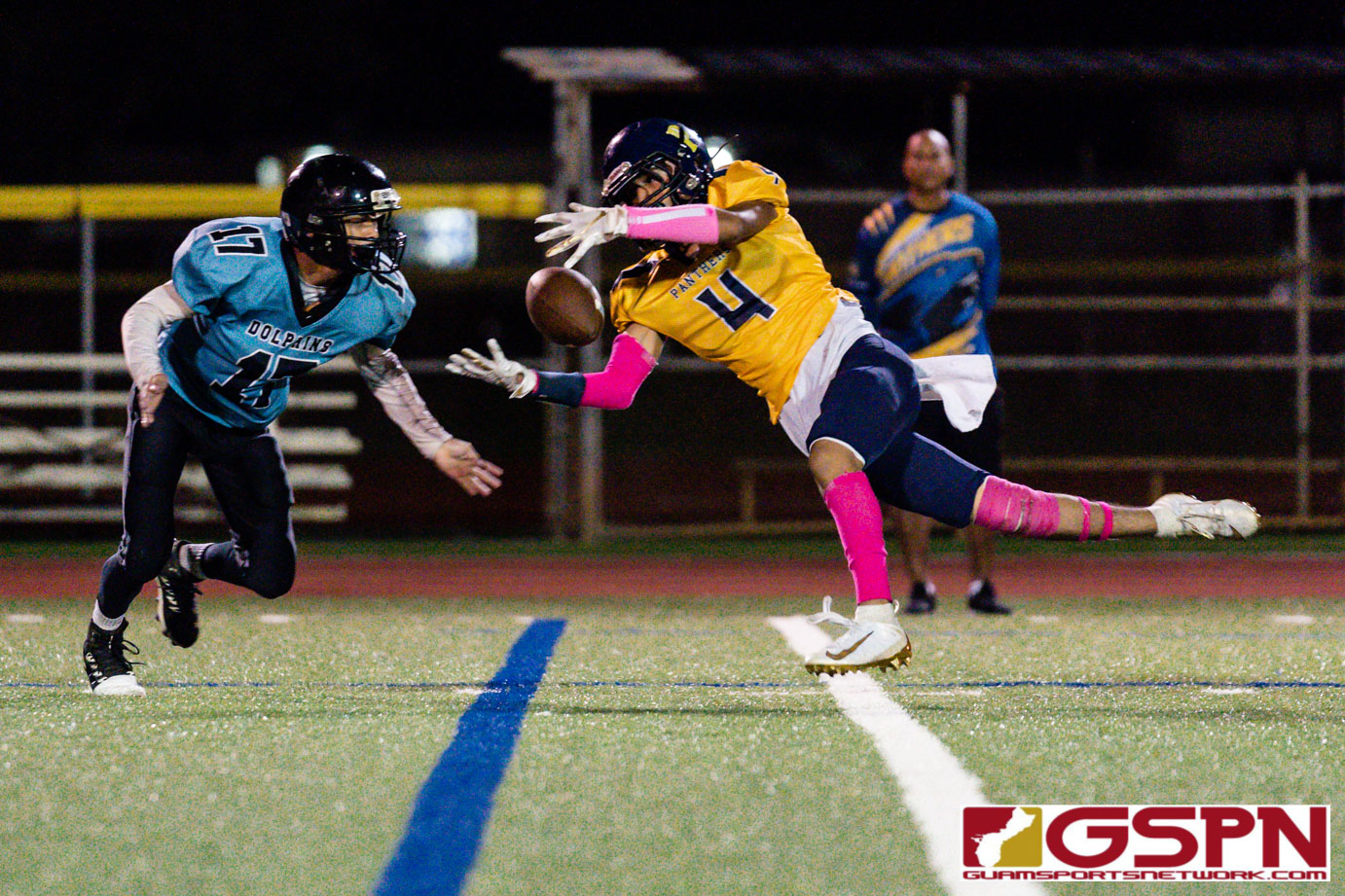 The final game of the IIAAG Football regular season between Guam High Panthers vs the Southern Dolphins played out in Agana Heights Saturday evening with a shift in playoff seeding being wagered on the games outcome.

The Panthers had already secured the 3rd seed in the playoffs after the Sanchez Sharks fell to the GW Geckos Friday evening, but heavy playoff implications were still in play for the Southern Dolphins as a win would solidify their spot as the 5th seed and a loss would drop them into a three-way-tie between Tiyan and JFK, to which Southern would fall to the 7th seed.

Four different Panthers found the end zone resulting in a 27-14 victory over the Dolphins, forcing Southern to settle for the 7th seed. Southern, Tiyan and JFK all sport a (1-5) record with the tiebreaker being an accumulation of ‘Points Allowed’ between the three teams since they had all beaten each other.

Panthers quarterback Travon Jacobs rushed for and threw a touchdown on the night, running back Jason Jackson scored a go-head TD in the 2nd quarter, and Julius Gaduang and AJ Johnson also celebrated scores in the end zone to round out the Guam High touchdowns.

Southern’s Conan Baza supplied both scores for the Dolphins on special teams and on a rush, with his final touchdown coming on a 55-yard score on the final play of the game.

With the playoffs set to begin next weekend, six teams will battle to stay alive in the opening round as Guam High will face the 6th seeded Tiyan Titans while the Dolphins will face the 2nd seeded GW Geckos. The last time the Panthers faced the Titans was in opening week and quarterback Travon Jacobs isn’t expecting to see that same team come this weekends playoffs.

“[Tiyan] has been playing good this whole season. I know they held GW to just 13 points so we know they’re good. They’re going to come out to try and beat us, just like Southern did,” said Travon on facing Tiyan in the opening round.

The Panthers took the opening lead after marching down to the goal line on their opening offensive series. Jacobs used a quarterback sneak to punch in the score and Alex Shimasaki made good on the PAT for a quick 7-0 Panther lead.

Southern’s Baza would get his team on the board moments later after returning a 65-yard punt through the middle of the Panthers punt coverage to get within7-6. A 2-point play from quarterback Ethaniel Escuadra to Isaac Jesus gave the Dolphins the lead 8-7.

Guam High took the lead right back in the 2nd quarter as Jason Jackson hit a wide open hole on the left side from 12 yards out for a go-ahead touchdown 14-8.

The Dolphins were able to get as close as the five yard line as the 2nd quarter was coming to a close, but three failed runs and a delay of game penalty forced them into halftime still trailing 14-8.

Panther’s Jackson would then take the opening kick of the 3rd quarter 95 yards to the house, but a clipping penalty would negate his touchdown bringing his return to just 55 yards. Gaduang eventually find the end zone on a 25-yard run, but a missed PAT left the score 20-8.

Guam High added their final score early in the 4th quarter as Jacobs connected with a streaking Johnson up the left sideline for a 52-yard score, putting the Panthers ahead 27-8.

Baza did manage to find the end zone on the final play of the game, taking a handoff up the middle for 55 yards.

All focus for the Panthers has quickly shifted towards getting in the right state of mind for the playoffs and the team hasn’t lost sight of their overall goal.