The GW Geckos scored two defensive touchdowns and secured a late turnover to secure the #2 seed in the IIAAG. 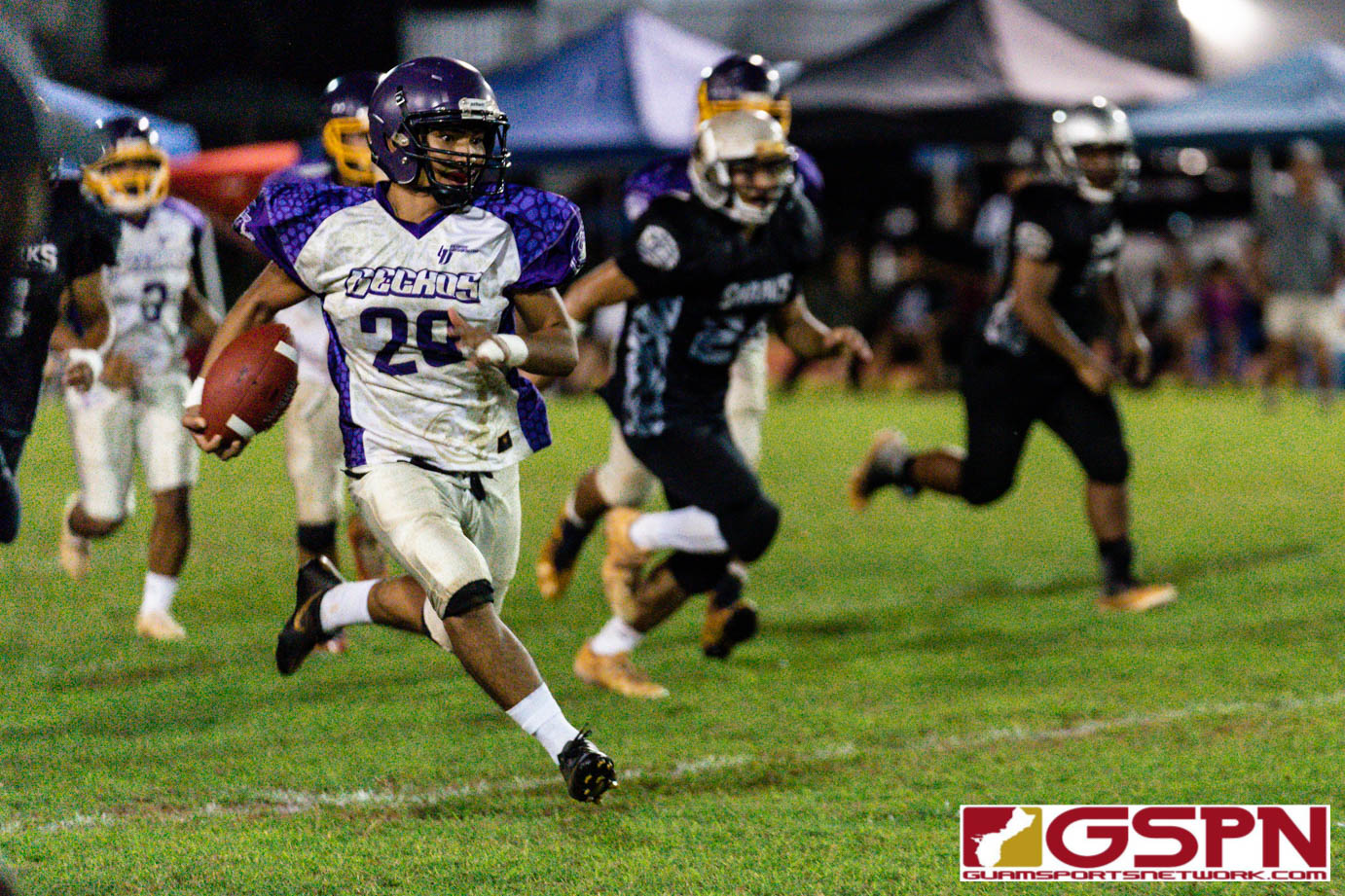 The GW Geckos and Sanchez Sharks had to duke it out for the #2 seed in the final weekend of the IIAAG regular season as both teams were only sporting one loss heading into Friday’s big game. GW would post up two defensive touchdowns and a special teams score in their 27-14 victory.

From the opening eight minutes of action, four touchdowns would score in the blink of an eye. On the Sharks opening drive, Gecko linebacker Mykai Blas would scoop up a fumble by the Sharks at the 15-yard line and return it for touchdown to go up 7-0 after a Ricky Macias PAT.

The Sharks would respond on the very next drive with a 70-yard touchdown run from Jeremiah Sablan on the first play after the kickoff to get within 7-6.

GW would score on the ensuing kickoff as Keanu Salas took the kick 80 yards to the house to put GW up 14-6.

Sanchez would get near the red zone on their next drive, but a fumble at the 25-yard line would be scooped up and returned by defensive back Ipo Indalecio for the 75-yard scoop and score to put GW up 21-6 in the frantic opening quarter.

“I saw an open field with the ball bouncing all by itself so I just took it home,” said Blas on his fumble recovery for the games first score. “We kept our heads up and drove forward, continued to be the best we can.”

Tensions would rise in the 4th as the Sharks got an 80-yard run from Lumba, with Indalecio making a touchdown saving tackle at the five-yard line. Sablan would finish the job on the short touchdown to put Sanchez within reach down 21-14, following a successful 2-point try.

Sanchez would turn the ball over midway through the 4th after a punt attempt gone wrong, allowing the Geckos to start their drive on the Sharks 26-yard line. GW would attempt to go through the air on 4th down as Macias was looking for Brendyn Cruz in the corner of the end zone, but the pass would fall incomplete as Cruz juggled the well-defended catch.

The Sharks would get a shot at tying or taking the lead down 21-14, starting from their own 20. That’s when Gecko defensive back Mana Indalecio knew a pass would be coming his way after prepping for it all week.

“All week our coaches told us to watch the tight-end straight away because that’s how they score through the air so I just kept my eye on that play. The pass looked like it was thrown too short and I just made a play on it,” said Indalecio.

On 3rd down, Sharks quarterback Jayton Penaflor was looking up the middle and Indalecio would make a break on the ball, picking the ball off and bringing the interception back from the 30 to the four-yard line. GW would punch in the score after Gabriel Gilbert grabbed a fumble in the end zone to up 27-14 after Macias’s only missed PAT on the night.

With the playoffs kicking off next weekend the Geckos are only concerned with what they can control.

“We’re only going to focus ourselves and bettering ourselves,” said Indalecio.

“As long as we’re worrying about ourselves then we’ll be able to do the best we can do,” added Blas.

GW will play the lowest seeded team between the Dolphins, Titans and JFK Islanders, but final seeded hasn’t been decided as all three teams are battling a three-way tie.