After losing two tough games, the Guam High Panthers are back in the win column. 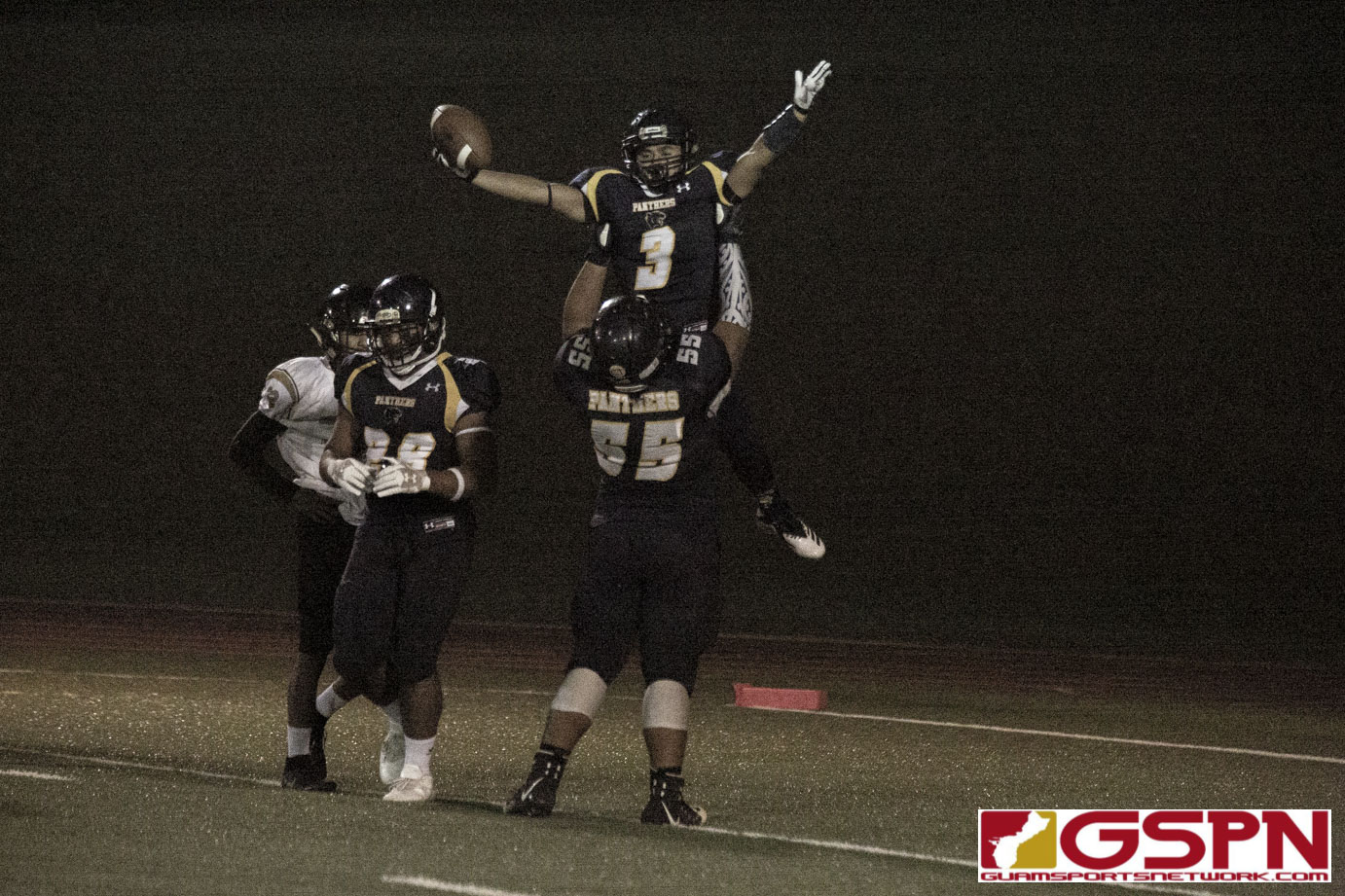 After getting blown out the last two games against FD and GW, the Guam High Panthers bounced back with a 48-18 statement victory against the visiting JFK Islanders on their home turf.

Julius Gaduang and Nick Keefe did not disappoint the home crowd and combined for 386 total yards and five touchdowns to lead the offense for Guam High. The Panthers improve to (2-2) while the Islanders fall to (1-3).

“We play Sanchez next week and the game plan is to come out and execute just like we did tonight.”

Gaduang got the offense going in the opening quarter, finding holes created by the offensive line. He had two big touchdown runs; a 34-yard and 40-yard score in the first quarter to put the Panthers up 12-0 after failed extra point attempts.

“The credit goes to my offensive line and the fakes by the wide receivers,” said Gaduang.

The JFK Islander offense finally got on the board after quaterback Allen Blend found speedy receiver Nico Velez for a 24-yard touchdown. Blend completed three consecutive passes to set up the touchdown, a 10-yard short pass to Velez and a 26-yard slant to Shaun Parker.

The Panthers immediately answered with Jacobs rushing for a three-yard score after Gadouang had a 53-yard run. Jacobs later connected with Keefe for a 65-yard bomb on fourth down to go ahead 30-7.

JFK suffered a huge blow after Blend went to the sidelines with a leg injury and sophomore sensation Jacobe Quinata did work moving the chains to put the Islanders in the red zone. Quinata’s work on the ground was enough for kicker Juan Sarmiento to split the uprights for a 37-yard field goal just before halftime.

The Islanders trailed 30-10 at the break.

Quinata started the third quarter with a 25-yard run, but three failed pass attempts by a hobbled Allen forced JFK to punt.  Islander lineman Dysseus Quintanilla recovered a bobbled punt and the Islanders were back in business and in the red zone.

The Islanders were unable to capitalize in the red zone with Jayson Jackson forcing a fumble which was recovered inside the 10-yard line by Zeshaun Adams. The Panthers later scored in the third quarter with Keefe catching a 44-yard touchdown pass from Jacobs on fourth down. Keefe stepped up with the Panther top two receivers, Jalen Thach and Ruben Ramirez, sidelined with injuries.

The Islanders kept grinding with Blend now watching from the sidelines with an injury. Quinata played quarterback and he called his own number in the fourth quarter to score a touchdown. Quinata scored the 2-point conversion and the score was 42-18.

The Panthers looked to take time off the clock and got a final touchdown instead, an 80-yard run by Gaduang, to end the game with a final score of 48-18. Gaduang’s final run gave him a total of 234 yards and three touchdowns. Keefe had 129 receiving yards and two touchdowns. Gadouang also caught a pass for a 26-yard gain. Terrell Rosario led the Panther defense with six tackles, Adams had two fumble recoveries.

“They both came up big, especially with our two top receivers down with injuries,” said Jacobs. “We are hoping to have at least Jalen (Thach) back for our game next week.”

The Panthers play the Sanchez Sharks next week in a game that can have huge playoff implications.

“We are aware that they have all been playing together since middle school and they have good camaraderie” said Keefe. “We are going in there confident just like we always do; our coach instills confidence in us and we feel like we can beat any team.”

GNYFF WEEK 4 ROUND UP
FRIARS AIR OUT WIN OVER SHARKS
Loading Comments...