FRIARS AIR OUT WIN OVER SHARKS

The Friars got a big night from their quarterback and receiver to upend the Sharks in a battle of previously unbeaten teams. 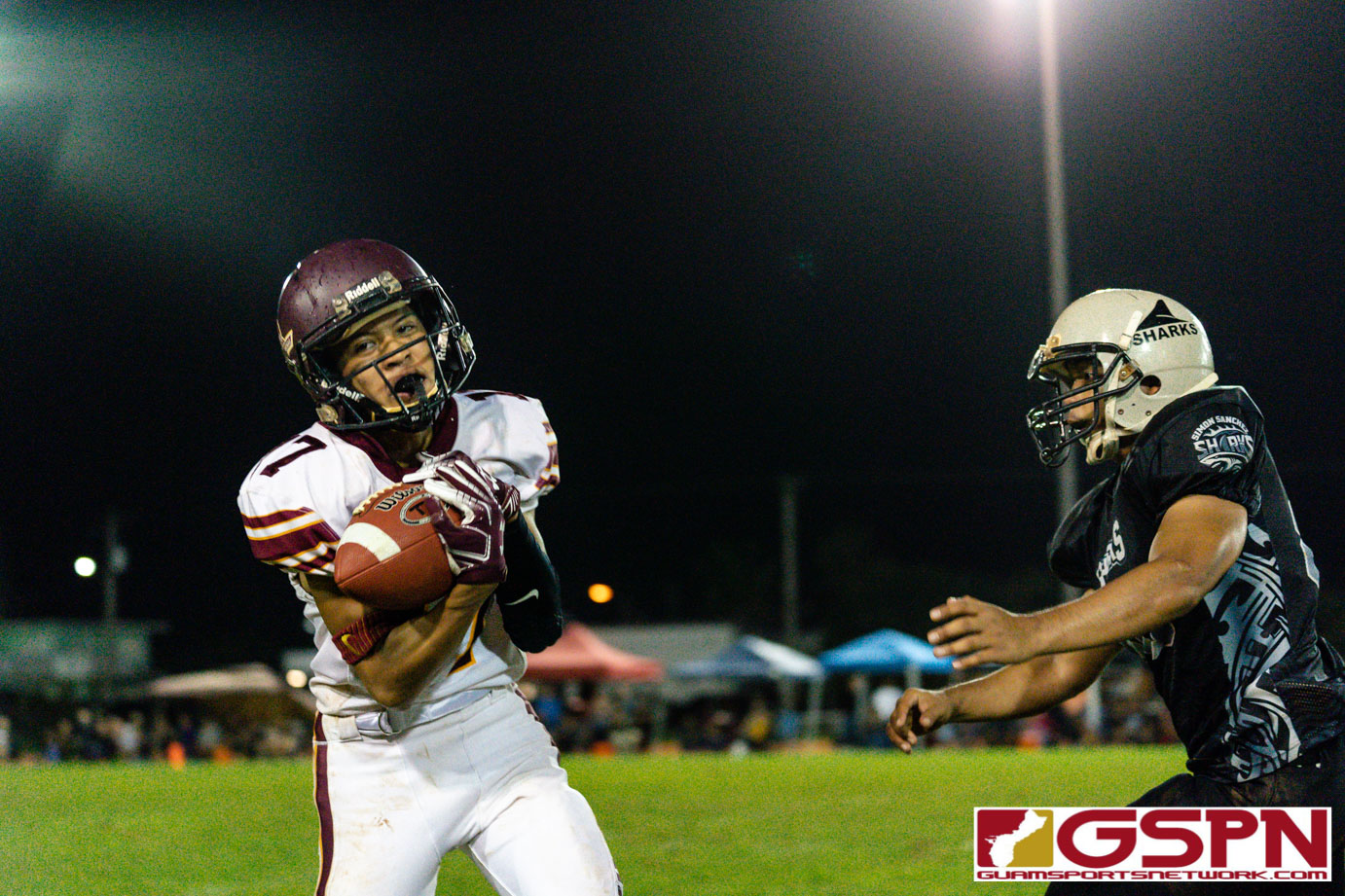 A breakout performance from FD Friars junior receiver Javian ‘Chun’ Cruz was the highlight Friday night as the wideout hauled in four touchdown passes in the team’s 34-6 win over the Sanchez Sharks in a battle of early-season unbeaten at the GW Field.

All 163 of Friar quarterback Nicholas Anderson’s passing yards were caught by Cruz, including the four scores, with the only other touchdown coming from running back Kein ‘Ghost’ Artero, who finished with 107 yards and one touchdown. The defense keyed in on Artero which opened the airways for Anderson and Cruz to have a breakout game.

“Sanchez really gave it to us,” said Anderson on facing the gritty Sharks. “We knew that the run game was going face some problems and we tried to look for weak points in the defense and we read it and executed.”

“I’ve been praying to God everyday that I’d have this ‘blow-up’ game that really showed who I am and tonight was the night. My offensive line gave [Anderson] a clean pocket to throw those dimes to me,” said Cruz.

The Friars struck quickly on their opening drive with Anderson airing out the first score on a fade with Cruz battling a Sharks defensive back for position in the end zone. Cruz broke away at the right second and hauled in the 20-yard touchdown pass with a successful PAT to go up 7-0.

“I had a sign, but I didn’t want to overthink anything and just wanted to go with the flow of the game and keep my head focused,” said Cruz on whether he felt a big night was coming after his first touchdown catch of the season.

The Sharks punted away on their opening offensive series and pinned the Friars in their own 15. After stopping two runs, the Friars were forced to pass on third down. Anderson attempted to go down the middle, but the Sharks were ready for the pass as Penaflor jumped the route at the 30-yard line and ran up the right side into the end zone. A failed 2-point try left the Friars in the lead 7-6.

Anderson shook off the INT and hit Cruz on the following drive on a quick pass for a 26-yard score. Cruz caught the ball on a quick swing pass and outran the Shark defense to the outside to put FD up 14-6.

“I had to learn a little something called ‘composure’. I had to compose myself and not get mad, not to get down on myself because my teammates were looking up to me and really needed me. I had to pull my own weight today,” said Anderson on shaking off the pick-six.

Anderson and Cruz would connect again in the 2nd quarter on the longest play of the game as Anderson tossed up a jump-ball for Cruz on single coverage. Cruz would once again time the jump on the ball, catching the pass on the 15 against his falling defender, running free to complete the 45-yard touchdown pass.

Artero scored his lone touchdown in the 3rd quarter on a 16-yard toss play to go up 27-6. Kein would make his exit in the quarter after suffering a big hit that would require some assistance off the field. Anderson and Cruz finished the drive that Artero went down with a 28-yard touchdown pass to get the score up 34-6.

Cruz, who didn’t play last season due to a leg injury, was the teams option behind Artero during his freshman season in 2017. He’s found a new position as a receiver this year and he feels he’s finally figuring it out.

“Me and [Anderson] work hard everyday after practice, even after all the coaches and players leave, we try and get that click that he and his brother had last year,” added Cruz.