Two of the best met in Guahan Varsity Football Leagues’ week 2 action with the Raiders and Eagles putting on an exciting showdown in a rematch of last years Championship Game. 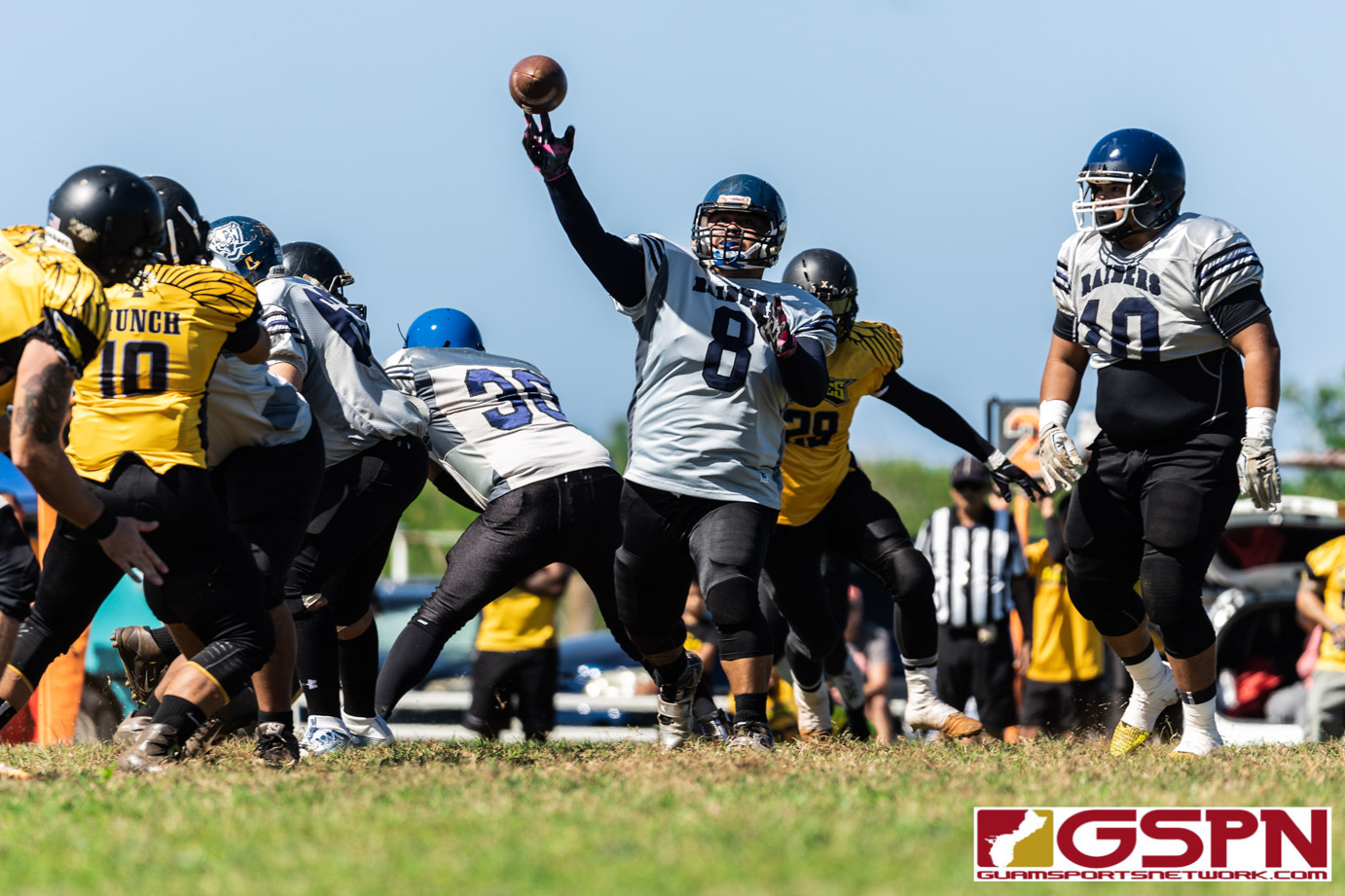 Two of the best met in Guahan Varsity Football Leagues’ week 2 action. The two-time defending champion Eagles hosted rivals the Raiders at the Eagles Field Saturday afternoon. Defense was the name of the game in this rematch from last year’s championship. Both sides traded leads until the Raiders were able to find their groove on offense, winning 28-19 in a close game throughout.

With just four teams making up the GVFL this season, the Raiders improve to 2-0 and the Eagles fall to 1-1 after two weeks of play.

Things got off to a slow start to open up. Neither team was able to get much of anything going offensively with both defenses forcing early three-and-out drives. It wasn’t until late in the 1st when action picked up.

Raiders quarterback Danny Manibusan opened up their first red zone appearance by handing the ball to former GW Gecko Hank Sabaln, who found daylight and more as he put the Raiders on the board first with the games first touchdown. Offense would stay on the field for the 2-point conversion, but after an incomplete pass in the back corner it was no good.

Eagles offense struggled to get things going as Steve “SP” Phillips couldn’t connect on his passes, and Taylor Lewis had nowhere to go in the running game. The Eagles defense stepped up though.

Trailing by six in the 2nd quarter, the Eagles got much needed points after a bad snap sailed over the head of Manibusan, who was then knocked to the ground leaving the ball right in front of Eagle safety Jeofry Limtiaco, who scooped up and loose ball to run it all the way to pay dirt untouched.

Chris Santos was good for the point after, paired with the defensive stand Eagles would take the lead 7-6. They would get the ball back after a quick three-and-out from the Raiders with less than a minute in the half.

Eagles produced a strong drive that resulted in a 35 yard field goal from kicker Santos. Raiders trailed 10-6 after two quarters of play.

Needing to make adjustments at the half, the Raiders turned to their quarterback. Danny Manibusan and the offense were firing on all cylinders headed into the fourth quarter. Manibusan was able to pass efficiently finding Spade Untalan and Joseph Carreon for big gains to set up a crucial scoring drive.

Working just outside the red zone, Manibusan gave a handoff to Jesse “Pumpy” Manglona on the left side sweep, with blockers in front and some room to run, to help Manglona scamper to the end zone for the touchdown. 2-point conversion attempt this time was good off a Danny Manibusan quarterback keeper.

The home team, not to be out shined on their turf answer back in methodical fashion after a long drive from Steve Phillips resulted in a 8 yard pass to young receiver John Mayo. Point after no good, but the damage was done giving the Eagles much need points.

In the end, the Raiders proved too much offensively for the defense to keep up with and it would be the Raiders who would remain undefeated to take the victory 28-19.