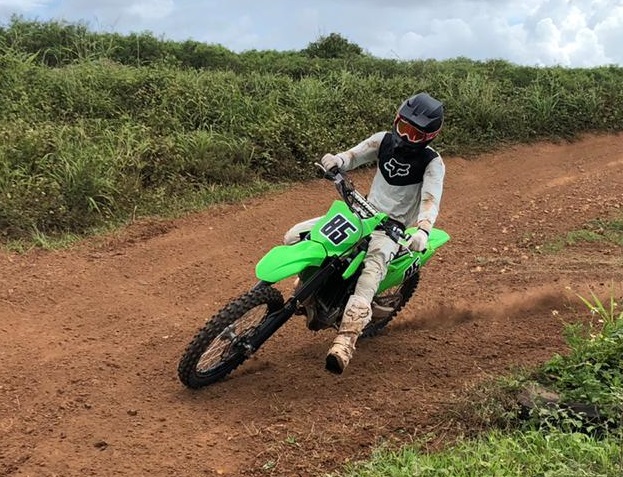 Round 5 of the 8 round 2020 Monster Energy Guam Motocross Championships was held this past Sunday at the Guam International Raceway in Yigo with strict COVID-19 safety protocols still in place. Racing once again kicked off at 11:30am after a morning of warm up practices. Two and four wheel classes ranged from several sized kids ATV and minibike classes along with a women’s minibike class up to the larger fuller sized machines of the 250, 450, Open Motorcycle and ATV classes. The track was in great condition and saw close bar to bar racing with sunny skies and a nice cool breeze blowing in and over the adjacent ocean side cliff. The event was a non-spectator event due to the ongoing COVID-19 precautions, but immediate family members were in attendance and very much a large part of the support and another fun day of competition and barbecues.

In the Open Motorcycle class defending Monster Energy Guam Motocross champion #1 Lil John Aguon aboard his RPM Yamaha supported 450 once again swept the round to take the win and led most every lap. #7 Jr Cepeda aboard a Yamaha racing part time this season was the only rider able to manage a few laps ahead of the hard charging Little Jon Aguon. #85 Cycles Plus Kawasaki rider Blaze Aiken did well to keep Jr Cepeda who finished second and the eventual winner Aguon in sight and took a solid third place aboard the Kawasaki. #28 Riley Clark aboard a Yamaha was locked into a fourth place overall and went unchallenged for the position. #23 Jordan Leon Guerrero on his LG Racing Yamaha rounded out the top five. The remaining top ten are as follows.

In the Open Atv class the reigning champ #28 George Santos aboard a blacked-out Kawasaki 450 beast atv took the lead right off the start. Santos was quickly being followed by #75 Camillo Lorenzo on a loaned for the event Yamaha Raptor and by #4 Robert Bucek aboard the Cycles Plus Suzuki. As Santos took off up front the #75 Raptor of Lorenzo and the #4 CyclesPlus machine of Bucek fought it out on the opening lap with Bucek quickly block passing his way by the Raptor of Lorenzo. Lorenzo made a charging attempt in the following 180 turn to retake the position but stalled out.

Once clear of Lorenzo Bucek then caught the leader Santos and then as Santos landed off a jump his motor sputtered and stalled allowing Bucek an easy take for the lead. With half the race left Bucek had pulled out a huge lead over the field while Santos and Lorenzo fought it out for second. Santos was able to make the move on Lorenzo but Lorenzo was having none of it as the two Open Atv racers tried to occupy the same place on the course at the same time causing both to connect and go flying end over end in spectacular fashion. Both riders were able to remount and finish with Santos taking second and Lorenzo in third.

In the 450 class Rpm Yamaha supported Lil Jon Aguon took the win with #19 Zachary Chang on his KTM in second.

In the 250 class #7 Jr Cepeda aboard his Yamaha took the win with #85 Blaze Aiken aboard the Cycles Plus Kawasaki in second and with #28 Riley Clark in third. They were followed by

In the Schoolboy/girl class #23 Jordan Leon Gurrero on his LG Racing supported Yamaha took the win with #74 Damian Manibusan second on his Yamaha and #193 Franklin Fujihira on a Yamaha in third.

In the Womens Minibike class #12 Jessani Leon Guerrero on a Kawasaki swept the class to take first with #13 Breane Larance on her Kawasaki in second and #33 Mariana Wenden on a KTM in third.

In the Open Kids Minibike class #31 Richard Wenden aboard a KTM took the win with #25 Lawrence Limtiaco aboard the team Cycles Plus Kawasaki in second. LG Racings #12 Jessani Leon Guerrero on her Kawasaki placed third with #75 Jay Whitman aboard a Kawasaki in fourth. #33 Mariana Wenden took fifth.

In the 50cc Kids Minibike class a heated battle between #13 Charleigh Moore and #20 EJ Larance  that saw the two youngsters swapping the lead back and forth with Charleigh taking second overall and EJ placing third.

Next race day for the 2020 Monster Energy Guam Motocross Championships will be round 6 of 8 on Sunday August 23rd. The event will be held at the Guam International Raceway on the Jose and Herminia Calvo Offroad Motocross course. Interested new or experienced riders are encouraged for more information to visit https://girmac.teamapp.com  or contact public information officer Robert Bucek by call or text at 727-5381.