MMA is coming back to Guam in the form of BRAWL, set to go down in March. 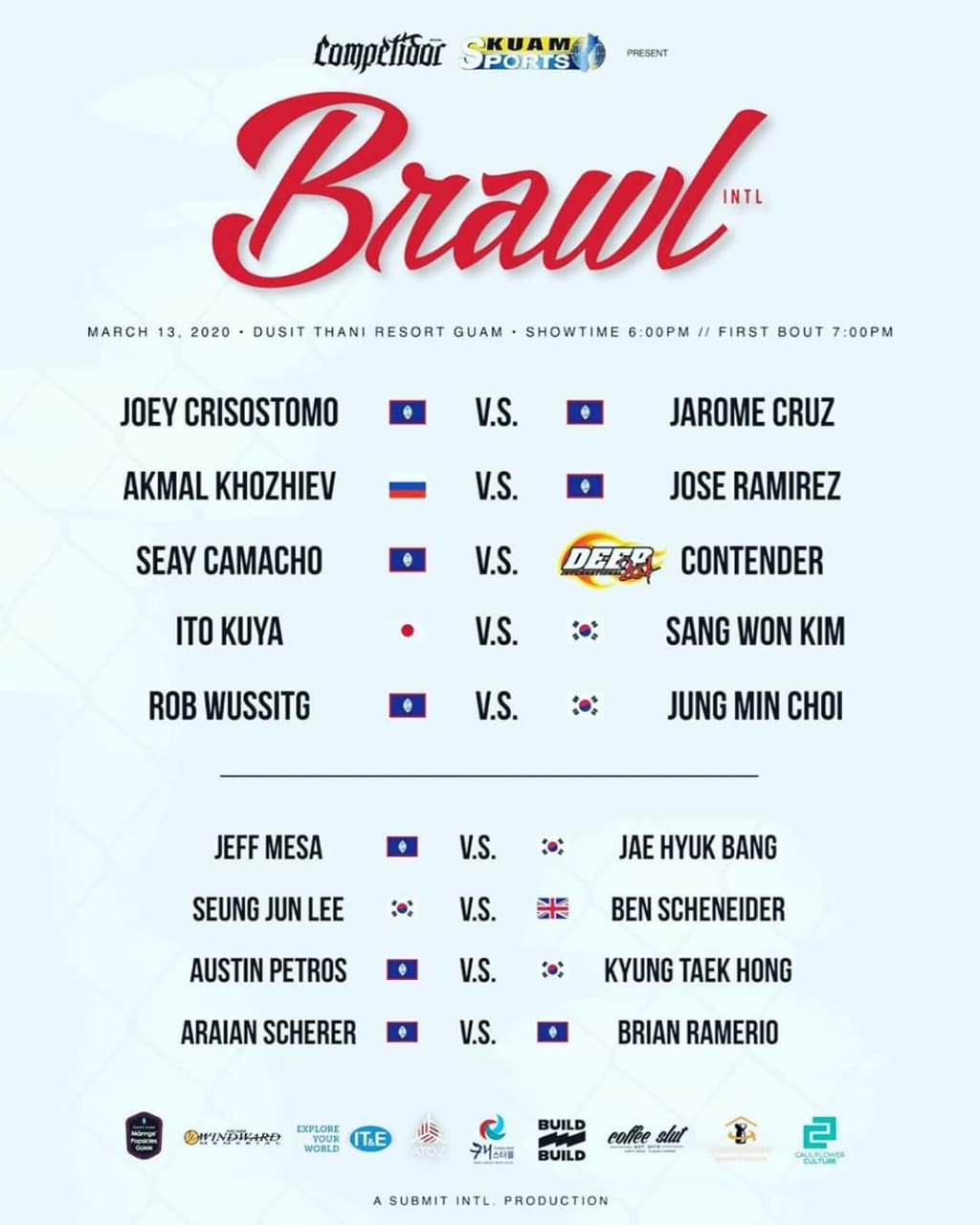 After a 3-year hiatus of MMA on Guam, Mixed Martial Arts is making its return to the island. Melchor Manibusan: a pioneer of MMA on Guam, serial entrepreneur of multiple MMA affiliated companies, and founder of the high scale BJJ event Submit, is now bringing a classy MMA showcase to the island which is set to be the “Champagne of MMA” – Brawl.

On March 13th, at the Dusit Thani Guam Resort, top level MMA athletes will make their way into the cage and put on a show in front of eager MMA fans.

Much like the jiu-jitsu showcase Submit, which was held last September, Brawl will mimic the same classy style, where members in the audience can dress their best, enjoy an elegant venue, all while watching some top-level Mixed Martial Artists compete.

Manibusan and his team are excited to give local MMA athletes a platform to compete and make it to the next level. He also plans to use this event to scope out the next generation of talent in the sport.

“Guam has so much talent right now. We have homegrown athletes competing at the highest level. But the truth is, our current talent is getting older and time is creeping up on them. With Brawl, a goal of ours is to find the next generation of talent and build them. And they’re all over Guam, they’re in Micronesia, Palau, and Saipan, but they don’t have an outlet or venue to scrap. With Brawl, we’re bringing the sport back to the island.”

Manibusan is very well connected in the world of MMA and is a phone call away from big name managers in the UFC, Bellator, Rizin, One FC, and Pancrase. This means that he can make things happen for fighters that show promise. So, Brawl is the perfect opportunity for fighters to showcase what they got.

Some big names on the card include Spike22’s Joey Crisostomo vs. Figo Bansai’s Jarome Cruz (affiliated with Steel Athletics). The two faced each other in a NoGi grappling match at Submit last September which ended in a draw, but their performance was a fan favorite that kept the audience on their feet.

For Crisostomo, this will be his first time competing in front of a home crowd on Guam and that opportunity motivated him to be one of the first competitors to sign up.

“It’s been a long time coming, I’ve never competed on Guam and I’m excited. I think that the fans are going to enjoy it. [Jarome] and I share a lot of respect for each other, and I think that mutual respect and humbleness is key for the youth and the new generation of fighters.

For Cruz, he is also excited for the opportunity to showcase his MMA skills in front of a hometown crowd,

“Very honored to say I’ll be competing in Brawl. This will definitely be an exciting bout to watch come fight night. Both of us will be looking for the finish via knockout or submission, no draws.”

Message to my opponent: “Let’s make weight, no excuses, keep it professional, see you fight night.”

There will also be international fighters flying in from Japan, Korea, and Australia to compete against Guam’s talent.

Uzbekistani fighter Akmal Khozihiev made Guam home a couple years ago and is fighting out of Steel Athletics. He drew some attention and excitement to his upcoming bout in his pre-fight interview:

Message to my opponent: “I know that guy talks a lot of s***.  Be ready, show up and I will knock you out.”

For Jose Ramirez, fighting out of Guam Muay Thai, the fight game has been a journey for him. He started fighting professionally in 2012 but got into fighting to defend himself after being called out in high school. From there, he did lots of underground fights, but decided underground fighting wasn’t for him when his friend nearly lost his life in an underground fight.

“I started my professional career in 2012 in promotions like PXC and Trench Wars. This is a new year, and I’m looking to make 2020 big. It’s been a journey and I’ve been waiting so long for this opportunity. It’s going to be a great show. I’m thankful for all the gyms, no disrespect to any of them.”

Message to my opponent: “It’s been a long time coming. Here I am man, let’s do this, may the best man win.”

Fighting out of Spike22, Guam Rugby National Team Captain Brian Ramiro will be making his MMA debut against Steel Athletics Araian Scherer. Ramiro caught the MMA bug fairly recently but has picked up the sport very quickly. Rizin’s Heavyweight Champion Roque Martinez has been his mentor in the sport and is excited to see what he’ll be able to do come fight night.

Currently, there are nine fights secured on the card. But there is a possibility of more fights being added in the coming days. To stay up to date on the latest news for Brawl and to view the full fight card, check @Brawlintl on Instagram.