The Academy Cougars didn’t back down from the challenge, handing the GW Geckos their first loss of the season for the 2021 ISA Softball Title. 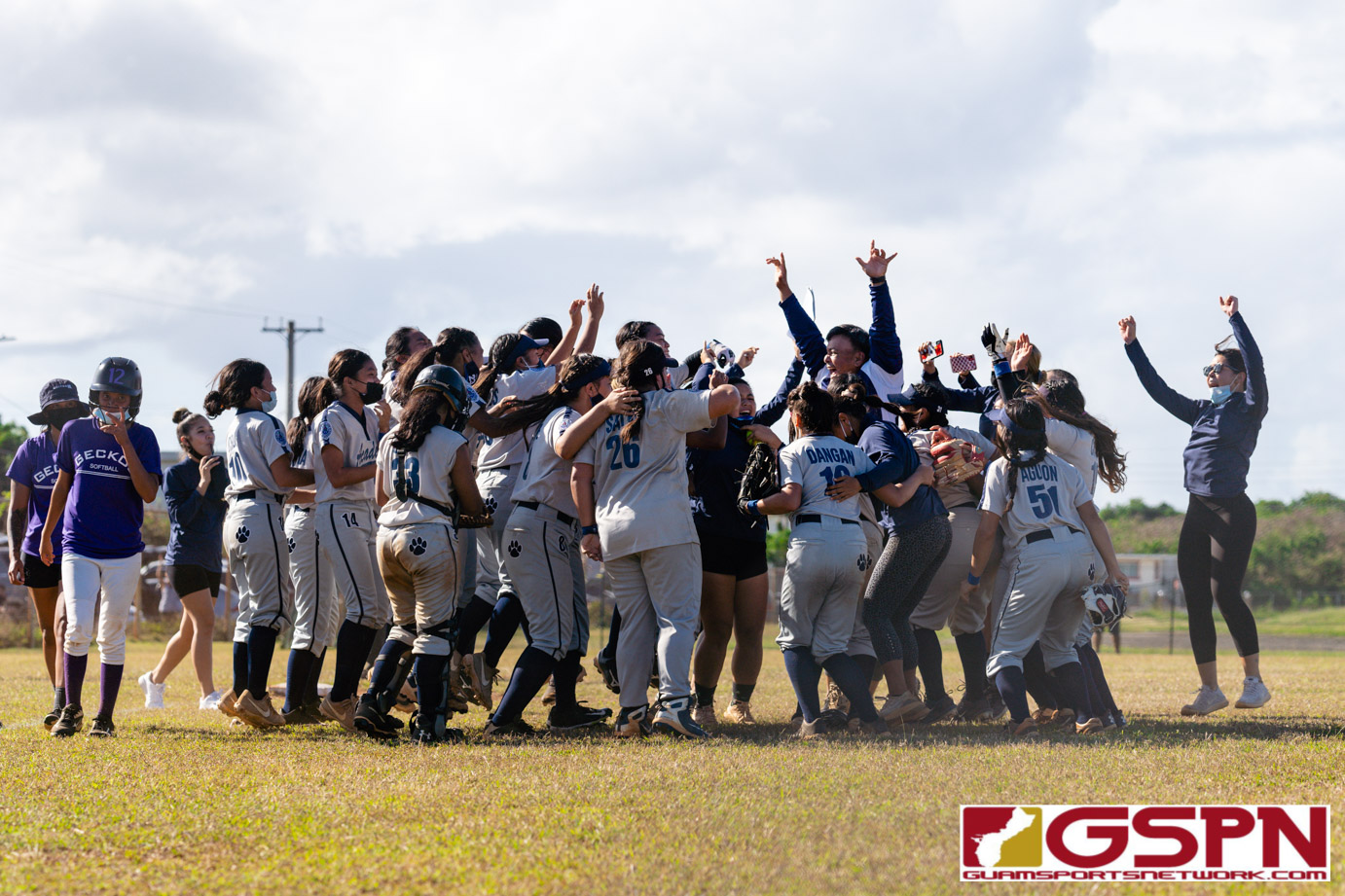 Against the odds and challenging the dominant unbeaten GW Geckos, the Academy Cougars showed no lack of confidence as they put their best sticks forward to stun the Geckos on their home field to win the 2021 ISA Softball Championship 12-10 through seven riveting innings Saturday afternoon.

The Cougars made all the little plays throughout the game that proved to be the biggest difference. Whether it was timely base stealing, sacrifice bunts/hits to move runners around the plate or even just constant cheering, it was clear the Cougars brought all the energy from the go, even doing an electric slide before the game to shake off the nerves.

Although, holding on to a 12-7 lead in the bottom of the 7th brought on an avoidable wave of pressure to Cougars junior pitcher Isabella Dangan, who was well aware that her play at the mound could make or break her team.

“I was under so much pressure,” said a relieved Dangan. “But I knew my defense had my back so whatever I threw, I knew they’d catch it out there.”

The Geckos would show their pedigree with their best hitters stepping up in crunch time as Joresha Quichocho, Rocki-Jae Mesa and Hannah Cruz all got hits, with 2RBI’s to follow, to get within 12-9. A bunt from Rhonamay Salvador would inch GW back 12-10 with the sideline erupting, but an out grabbed by Cougar Kadyence Chaco at second base would put the Cougars within an out from winning the title.

Facing Geckos batter Eliza Manglona with a 2-2 count, Dangan went with a wild switch-up that caught Manglona looking for the final strikeout to to end the game.

“She meant it,” laughed Topasna.

“Yeah, I meant that,” laughed Dangan.

Cougar center fielder Talen Topasna was instrumental on both sides of the ball, snagging five fly balls in her vicinity while scoring two runs and bringing one run in. The senior Topasna knew her number was going to be called upon a lot in the final game and she didn’t shy away from the responsibility.

“Every time we play GW I know they hit it outfield and it just excites me more knowing that. I just love to catch, it’s what I’m supposed to do!,” said Talen.

Academy was supposed to compete for the ISA Softball Title in 2020 against the Southern Dolphins, but COVID restrictions cancelled their game, in turn the season, handing the trophy to the Dolphins who had the best regular season record. Not getting a chance to play for the title was enough to motivate the current Cougars heading into Saturday’s finale.

Dangan pitched the whole contest for the Cougars and GW’s Savannah Grant was relieved in the 3rd inning by Salvador.

The Geckos struck first blood in the bottom of the 1st inning with Mesa bringing in Sophie Cruz on an RBI double. Quichocho would score on a fielders choice and Mesa would steal home moments later to put GW up 3-0.

Academy didn’t get on the board until the 2nd inning after a sac-fly by Savannah Aguon got the Cougars within 3-1. They would add another run on a pass ball to get within 3-2, but the MVP Savannah Grant would make a grab on a grounder while getting the out at first to end the inning.

Topasna would begin the bottom of the 2nd grabbing back-to-back outs with the defense getting the third out at second base to keep GW from adding to their lead.

The 3rd inning saw no scores from either team with Topasna making two plays for two more outs for the Cougars.

Academy would take their first lead 4-3 in the 4th as Kaeliah Guerrero brought in Almyra Cruz. Topasna would steal home after Salvador turned her back to the plate for a 5-3 lead.

GW would answer right back in the bottom of the 4th with Grant getting an RBI single to get within a single run 5-4, before stealing home to tie the game at five runs each. An RBI from Quichocho would give the Geckos back the lead and an RBI double from Mesa would give GW brief control of the game up 7-5.

Academy showed out in the 5th inning with Cruz airing out a sac-fly to get within a single run. An errant throw to first would allow two runs to score for the Cougars, who lead 8-7. The defense would keep the Geckos off the board in the 5th with two innings left to play.

Academy added two more runs in the 6th with the biggest plays coming from Olivia Salas, who made a sliding split to third base that riled up the Cougar sideline. Trailing 10-7, the Geckos went empty in the 6th with Dangan getting her second strikeout to end the inning.

Guerrero and Salas cashed in two huge RBI’s in the 7th to extend the Cougar lead 12-7 with the title resting on the hinges of their defense. Despite strong bats from the Geckos brass, the Cougars got the biggest play from Dangan on the change-up to stun the Geckos for the title.

Despite losing to the Geckos via mercy ruling in the regular season, the Cougars didn’t adopt any kind of underdog mentality as they truly felt they had what it took to win it all, despite the odds.

“We just left that all behind. Once we stepped on this field we’re all equals and it would just come down to who has the most heart in the end,” said Isabella on being the ‘underdogs’.

“Our coaches never made us feel like we were less than any other team. Like what Isa said, when we come into playoffs, everybody is at fair game. We don’t think about the standings and all we think about is our game vs. their game,” ended Talen.