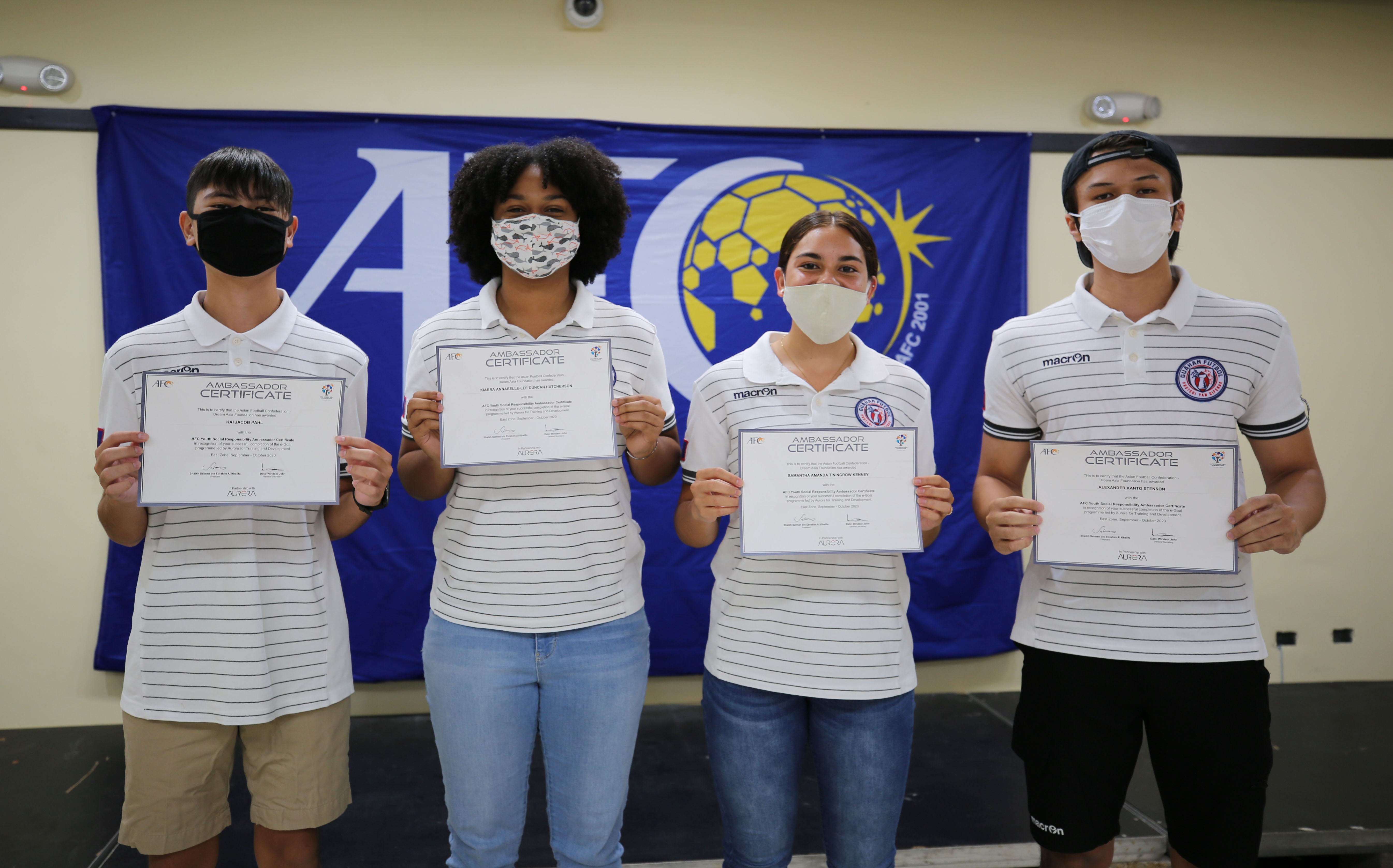 Kiarra Hutcherson, Samantha Kenney, Kai Pahl, and Alexander Stenson all earned their certificates after engaging in the AFC-Aurora eGoal Programme, a virtual event with other participants from the region over three weeks beginning Sept. 21 last year and completing all program requirements.

“On behalf of Guam Football Association, I would like to commend Kiarra, Samantha, Kai, and Alexander for their recognized efforts and achievements through this program with AFC and Aurora Training and Development,” said Tino San Gil, GFA President. “Over the course of the program, the four players learned so much about the impact of football both on and off the pitch, their important roles among their peers in community development, and also about themselves in the process. They are true role models for their peers and ambassadors of the sport.”

Guam’s four players join about 80 others from 42 different countries in Asia who have earned the certificate.

“The eGoal program was a great experience – the online sessions were very informative and I was able to work with many educated people about important topics,” said Stenson, a 17-year-old student at St. John’s School. “My key takeaway from the eGoal program was that anybody could make a difference in the community. Life-changing projects that help communities can come from anyone.”

Similarly, Pahl agreed that the program served as an eye-opener for him as a young athlete part of a much larger community.

“As an athlete, sometimes I don’t recognize certain things or see how big of an impact that my actions could have on others,” said Pahl, a 15-year-old student at Saint Paul Christian School. “One of the key takeaways for me from the program would be knowing that there is always someone out there who doesn’t have the same privileges as me and I have an important role to play as an athlete to try working toward having all others afforded those same privileges I had.”

The four athletes took part in nine different online sessions over the span of three weeks with key topics as Sport for Development, Philanthropy in Football, Inclusivity and Diversity, Safeguarding and Child Protection, Health and Well-Being, Civic Engagement, Peer Education, and Social Entrepreneurship among others.

Of the topics, Inclusivity and Diversity resonated the most for Hutcherson.

“Some key takeaways are understanding diversity and inclusivity and how sports impact people of all cultures and economic standings,” said Hutcherson, a 17-year-old student at Notre Dame High School. “As a national player representing the island, I now have the tools to pass this onto other soccer players.”

As part of the program, each of the certificate recipients will be working on social responsibility projects in their respective communities. Hutcherson teamed up with Kenney to work on a pilot project with Special Olympics Guam.

“I’ll be working with Kiarra, Coach Sam (San Gil), Special Olympics Guam, and various other amazing people to try to start a development program for young kids with disabilities on island,” said Kenney, a 16-year-old student at Harvest Christian Academy. “The project will take place over the course of a couple of weeks as we work specifically with 4 to 8-year-olds with special needs. Using a variety of activities that will incorporate sensory enrichment, we aim to see the kids develop both intellectually and physically. We also hope to provide a support group for the children’s mothers/parents by empowering them with their inclusion in their child’s development through football. We’re just in the beginning stages of testing out specific football-related drills and how to teach, so there’s still a long way to go. GFA has also been a big blessing as they’ve helped us step-by-step with this process.”

At the program’s conclusion, participants were required to submit project proposals to AFC and Aurora Training and Development in any of six areas: Grassroots, Gender Equality, Diversity and Inclusion, Safeguarding and Child Protection, Mental Health and Well-Being, and Environment.

Pahl has selected to work on a project with the GFA Grassroots Department to increase opportunities for all who want to become involved in football and Stenson is working on projects related to sustainability and the environment, including future beach clean ups, to continue beautifying the island he represents in international football competitions. Hutcherson and Kenney have already begun their projects creating sample sessions with Special Olympics athletes to be part of a larger event with more athletes. In addition to sessions with athletes, Hutcherson also is planning a related project to promote gender equality and women empowerment, working with mothers of the Special Olympics athletes.

“The AFC-Aurora eGoal Programme was incredibly memorable, enlightening, and so much fun,” Kenney said. “eGoal reminded me that there are issues going on now – lack of inclusion, inequality, abuse, discrimination, etc – that need attention and being part of a positive involvement is our choice. I learned that change is change whether big or small, and to make the most out of an opportunity that’s given to you.”

The 2020 program officially concluded in November after the completion of sessions for Central Asia participants, with a closing ceremony held Nov. 12. AFC officially issued the certificates this month.

Aurora designed a virtual social responsibility program in order to continue to offer meaningful exchanges as part of its COVID-19 response efforts, the Aurora Web site states. The Web site further states that the eGoal Programme, through a partnership with AFC and AFC’s Dream Asia Foundation, “is based on Aurora’s Model for Youth Development and aims to educate young players on the social and moral foundations of sports, equip them with the necessary skills to lead social change, and offer them a platform through which they can advocate for ethical and responsible football.”