The FD Friars completed a volleyball three-peat after defeating the Harvest Eagles in straight sets for the 2021 IIAAG title. 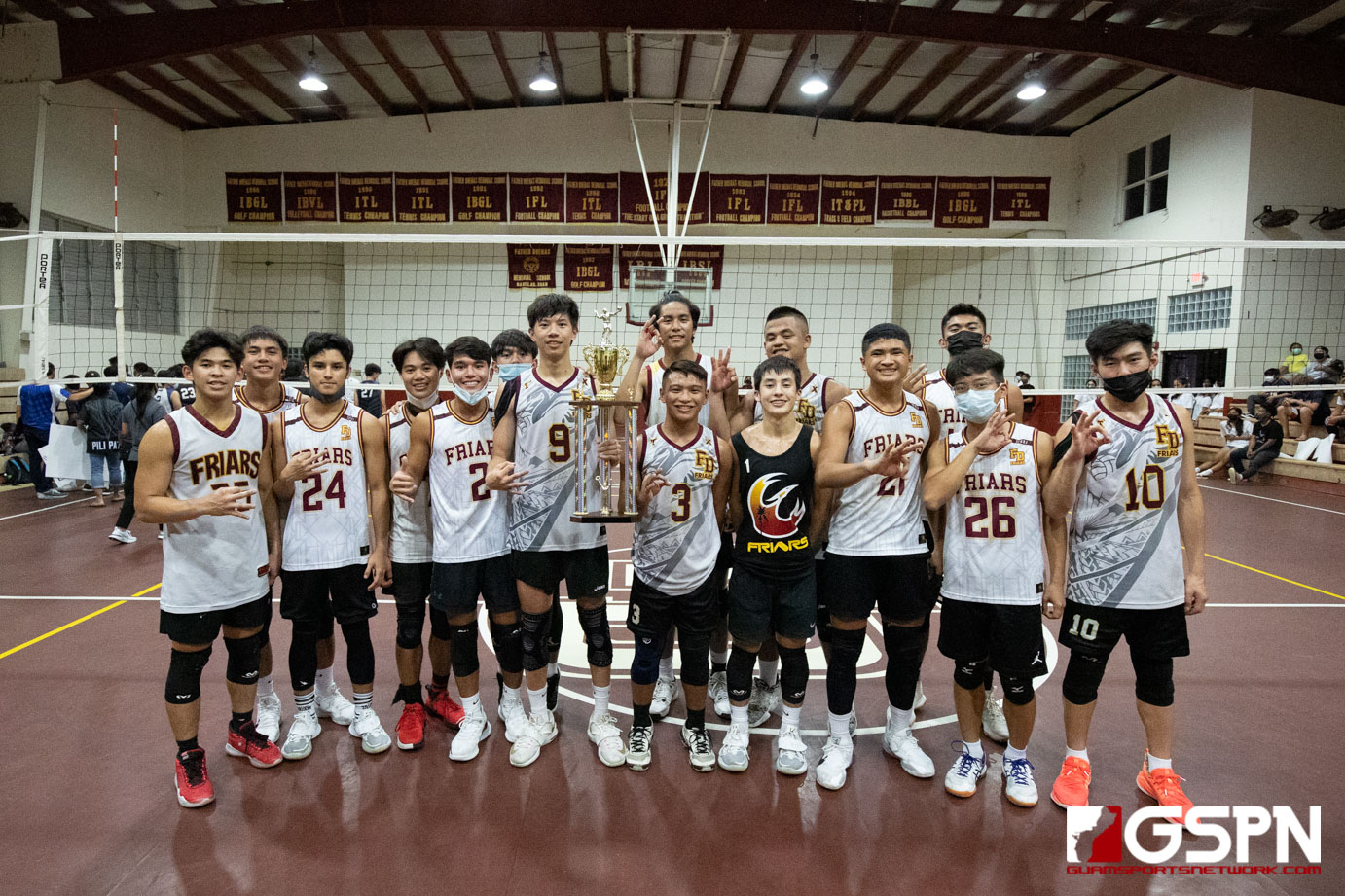 A dominant offensive display combined with efficient defense and serving was what the FD Friars presented Tuesday evening in their straight sets victory over the Harvest Eagles 25-17, 25-13, 25-18 at the FD Jungle. This becomes the third consecutive title for the Friars, their fourth in five years!

The condensed season that started in April went through a regular season, playoffs and championship game all within a one-month span with the Friars earning the leagues best record (5-0) while going unbeaten in the playoffs, which earned them the chance to host the IIAAG Title Game.

“MVP wasn’t something I was looking forward to, but instead I was focused on winning a Championship and I’m just glad we won that Championship,” said Nguyen.

Santos was big-time, most especially in the 2nd set where he collected three kills and two aces along with orchestrating a 6-0 run at the service line midway through the set to give his team a 16-6 lead, their first double-digit lead of the evening.

“I didn’t [expect a big night], but I did prepare like I usually do, my usual routine. We all prayed before the game and hoped for the best and God gave us the win,” said the 5’6″ middle blocker Santos, who apparently has springs for legs.

Robles would take over in the second half of the 2nd set with three kills and a vicious two-hand block that helped FD cruise to a 25-13 set victory.

The Eagles looked to make a turn around in the 3rd set after lead man Wesley Keith notched a kill and two serve aces to give his team a 7-6 lead. The Friars took an early timeout and responded immediately with a 4-0 run to take back control of the game up 10-7. Robles smashed two kills to give FD a 14-8 lead which led to the teams biggest lead of the set 18-9 off an Elijah Garrido jump-serve ace.

A short 3-0 rally by the Eagles would force another timeout by the Friars, who were up 23-17. A hitting error by the Eagles would give the Friars final possession and FD turned to the league MVP as Garrido put a perfect set in the middle of the court where Nguyen would lift off from the backline to smash the games final point.

“We were extra pumped and we’ve been ready for a game like this for a long time. We had the right mentality today and with all the preparation that came into this, I’m just happy we pulled through,” said Santos.

Eagles’ Keith had a stellar game with 10 total kills and three blocks to go along with three aces. Serving errors would plague the Eagles with 13 total points left on the line.

The Friars did only play seven total games this shortened volleyball season, but winning the league title won’t be celebrated any less than it would have had they won the title after a normal season.

“No no no no,” said Garrido if the shortened season left any feelings of unfulfillment. “I mean, we are a little disappointed that the season wasn’t longer, we would’ve liked to grow a little more with the underclassmen before we leave, but the end result is still the same. We’re grateful for this win.”

“After a year of not being able to play . Our younger players have a lot of skill so we have a lot of trust in them. Even with our freshmen coming into the game, they all contributed,” said Nguyen.

Garrido had always been a hitter in the sport, but he chose to take on the new role as setter this season which allowed Nguyen, the teams most experience setter, to take to the outside.

“It wasn’t that big of an adjustment, but it was a decision that I’m glad that I made. Jeremiah is a really talented guy and I know that he can do a little more than me when it comes to hitting, but being able to see him shine out there and know that I was a part of it is just as good,” said Garrido.

The St. Paul Warriors defeated the ND Royals in the 3rd place game with that game going into five sets!