After dropping the first two sets, the Guam High Panthers rallied to win the next three behind Amoni Washington and Kamryn Thompson’s strong play. 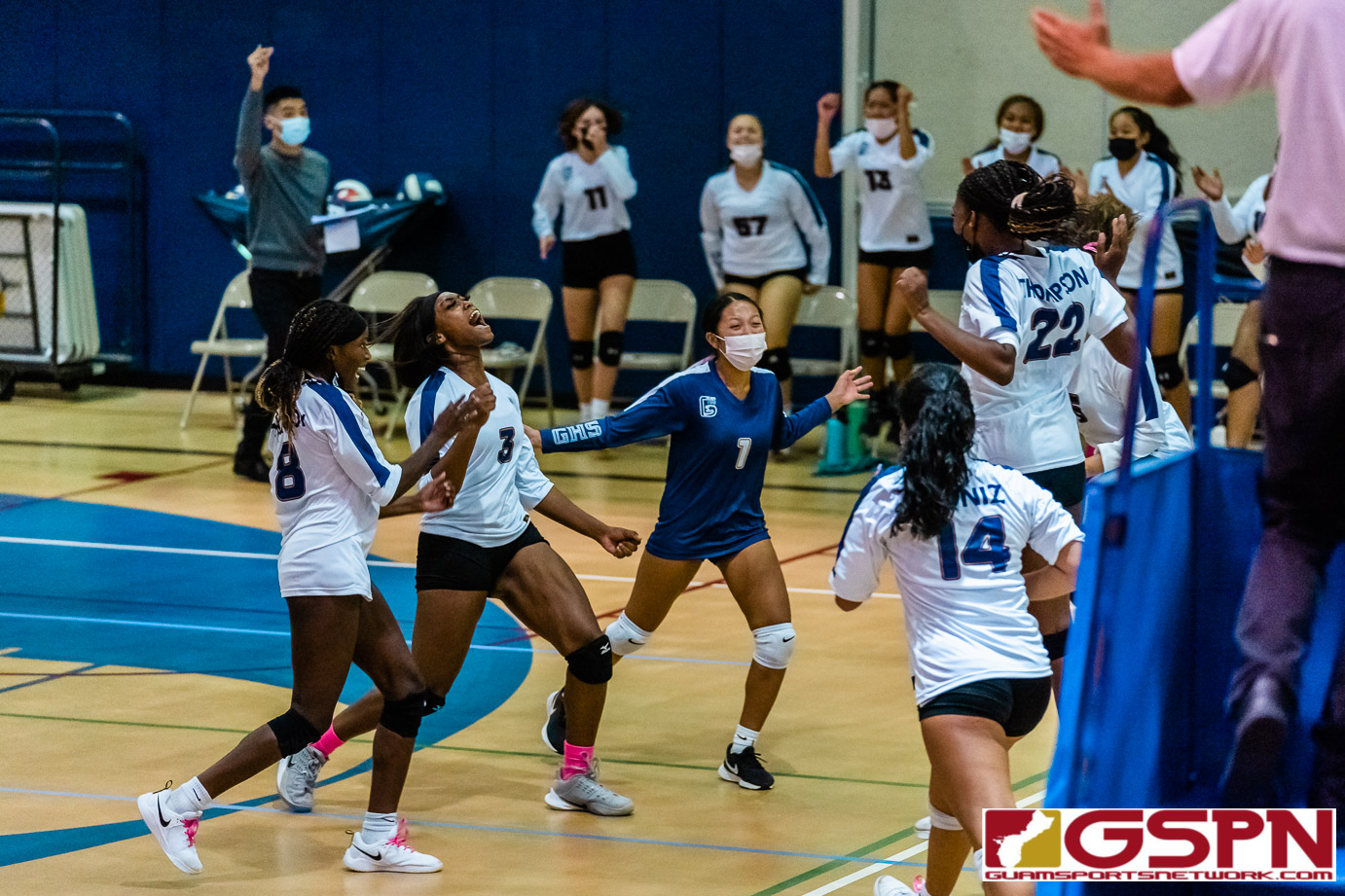 The Guam High Panthers showed no quit at home Tuesday evening after dropping the first two sets against the ND Royals in a IIAAG Girls Volleyball showdown. Led by the dynamic duo of middle Kamryn Thompson and Amoni Washington, the Panthers pulled off a come-from-behind victory to stun the Royals in five sets 20-25, 17-25, 25-18, 25-17, 15-13.

The monstrous game from the pair of Panthers included 19 kills and 9 aces from Washington and 14 kills from Thompson. Guam High could have easily chalked it up to an off night heading into the 3rd set, but Washington and Thompson had other plans as the two produced 17 of the teams total points in the set alone.

“We just have to go into every set like it’s a clean slate and make sure you’re going your hardest and giving it your best… We knew weren’t playing our best so we just had to let [ND] know that we’re stronger than what we were showing,” said Washington.

Thompson got started in the 3rd set first, rattling off six straight points from five kills and an ace to give her team a 7-5 lead. Washington took over later in the set scoring eight straight points, seven off of serve aces, to surmount a 20-11 lead to take command of the 3rd.

“We’re both leaders on the team and I knew that the team was down after dropping the first two sets. I had to do something to try and motivate them to get them back up again,” said Thompson on what sparked her strong play in the 3rd.

With momentum starting to shift, Washington continued to shine in the 4th set getting her fifth kill of the set to get her team up 12-8. ND got a string of big plays from middle Faith Piper, including a block up the middle to tie the game at 14.

Washington would then proceed to pick apart the ND defense with three more kills to fuel a 6-1 run with the Panthers eventually winning the 4th to force the 5th and final.

Thompson would provide a pair of kills to spark an early 6-2 lead. Piper would score five straight points for the Royals by her lonesome, followed by Seniayath Bell kill to tie the game 7-all. The team would continue trade points with Bell tying the game at the 12 from service line.

Guam High would turn to Washington as she delivered the teams 13th point with Royal hitting errors doing them in for the final Panther points.

“I think was a big win for us, but going forward we should be playing every game like how we played the last part of tonight’s game,” admitted Washington.

ND got a stellar night from Piper with 12 kills, three blocks and four aces. ND also got good output from Bell who added eight kills and five aces.

The IIAAG is still following strict COVID-19 restrictions allowing no more than 50 fans in attendance, but the gym was still rocking with the little amount of people inside from both sides. The Panther posy provided plenty of acoustics through the gym which was felt by the whole team.

“The fans helped us so much. I feel like our team gets down too much when we lose a point, so the fans really helped bring our momentum back up,” said Thompson.

Guam High improves to 2-2 after an opening night loss while the Royals fall to 1-1 for their first loss of the season.