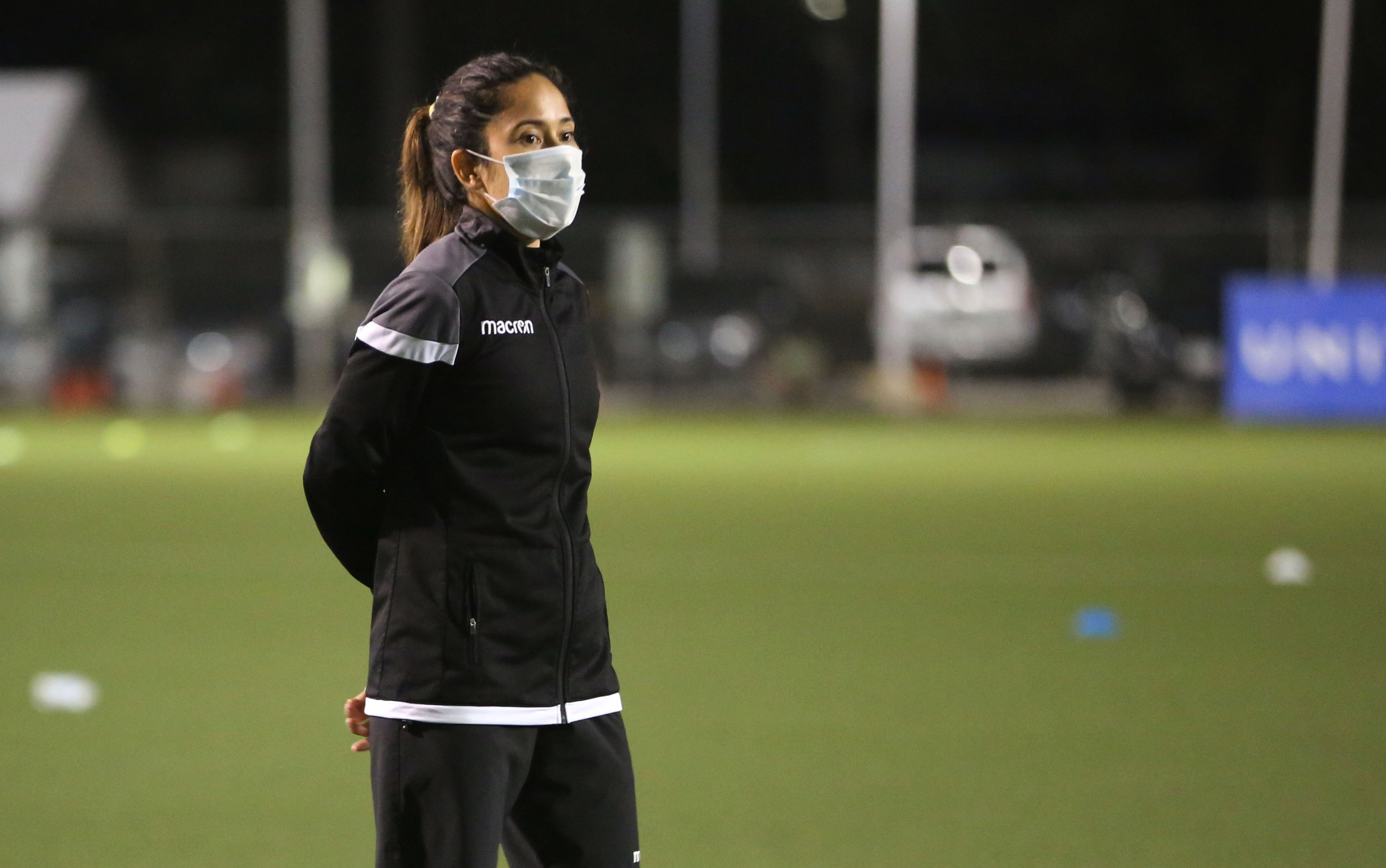 PRESS RELEASE – Working to create sustainability in Guam’s elite women’s program by imparting game knowledge and experience to the next generation of women’s football players was a key component in Anjelica Perez’s decision to accept the role of Head Coach for the Guam U17 Women’s National Team earlier this year.

Perez, captain of the Masakåda, Guam Women’s National Team, becomes part of the growing number of national team players taking on coaching roles at the youth national level while simultaneously training to compete at the senior national level.

“As a Guam National Team player, Captain, GFA Ambassador, and fan of the best sport in the world, my decision to accept selection as the U17 Women’s National Team Head Coach is natural,” Perez said. “My main priorities are to retain the girls in the national development program and prepare them for entry into the senior team, serving as a constant motivator and guide and showing them the individual and team benefits of discipline, persistence, and commitment to the game.

“As a collegiate athlete born and raised in Guam, I am determined to improve the quality of football on the island and enhance the football culture. My goal is to create a training environment to prepare the girls for elite competition – particularly for, but not limited, to Asia. I also want to integrate football education, by encouraging the girls to watch televised professional league matches and to have conversations about favorite players and key moments in the game. Exposure to the international level of the game can inspire the girls to be the best in the world,” Perez added.

Perez was first called up to train with the Guam Women’s National team in 2005, the year she turned 14 years old, and eventually assumed the role of team captain seven years later. She scored her first two international goals in 2012 against Hong Kong in the EAFF Women’s East Asian Cup Preliminary Competition Round 1, a brace that helped the team come back from a 0-3 halftime deficit.

“I am happy that Anjelica accepted the position of Head Coach of the U17 Women’s National Team,” said Sang Hoon Kim, GFA Technical Director and Head Coach of the Masakåda. “She is very invested in the success of Guam football and now with her additional role, she will directly contribute to the sustainability and success of the women’s program, and the national program as a whole. With her dedication and commitment to holistic development through the sport, as well as her personal determination to succeed, she will be an inspiration to many players moving up Guam’s elite player pathway.”

The U17 Women’s National Team currently trains three times a week. The team is committed to play in the qualification round of the AFC U17 Women’s Asian Cup, which is scheduled for September this year.

Particularly on Tuesdays and Thursdays beginning last month, Perez first coaches the U17 Women’s National Team from 6 p.m. and then changes into her training kit to join the Masakåda squad beginning at 7:30 p.m. Despite what already seems like a busy schedule, one of the challenges during the current pandemic situation are restrictions that limit matches being played locally and types of training during sessions.

“Our current challenge (locally) is the drought of games due to the pandemic,” Perez said. “Although a standard of performance is demanded at training, local competition has limits. Our national players need continuous experience in international games and camps throughout the year to improve at a global scale. GFA is constantly developing the national calendar in a massive effort to achieve strategic goals.”

Perez was nine years old when she first played the sport, suiting up for the Orange Crushers FC and the Guam Shipyard Wolverines as a youth player. She helped earn multiple championship titles for the Lady Crushers and the Bank of Guam Lady Strykers, her current club, in the Bud Light Women’s Soccer League.

She is a four-time IIAAG Girls High School All-Island All Star Team selection and two-time MVP of the league – in 2008 and 2009 – with the Notre Dame Royals. After high school, she played for the Saint Martin’s University Saints and was named to the All-Conference Academic Team in 2011. The Saints compete as part of NCAA Division II’s Great Northwest Athletic Conference.

“GFA has sponsored my AFC “B” and “C” licensure courses and other elite coaching and administrative workshops which has fueled my desire to give back at the national level,” Perez said. “Ultimately, I want to manage the Women’s National Team. As Head Coach of the U17 Women’s National Team, I will learn tremendously from the players, and my mentor, Coach Kim. I am grateful for the opportunity to make a direct impact on the future (FIFA/Coca-Cola Women’s World) ranking of Guam. At the end of the day, only one person is selected as a team’s Head Coach; I am challenged by this appointment to build a team that will be remembered.”