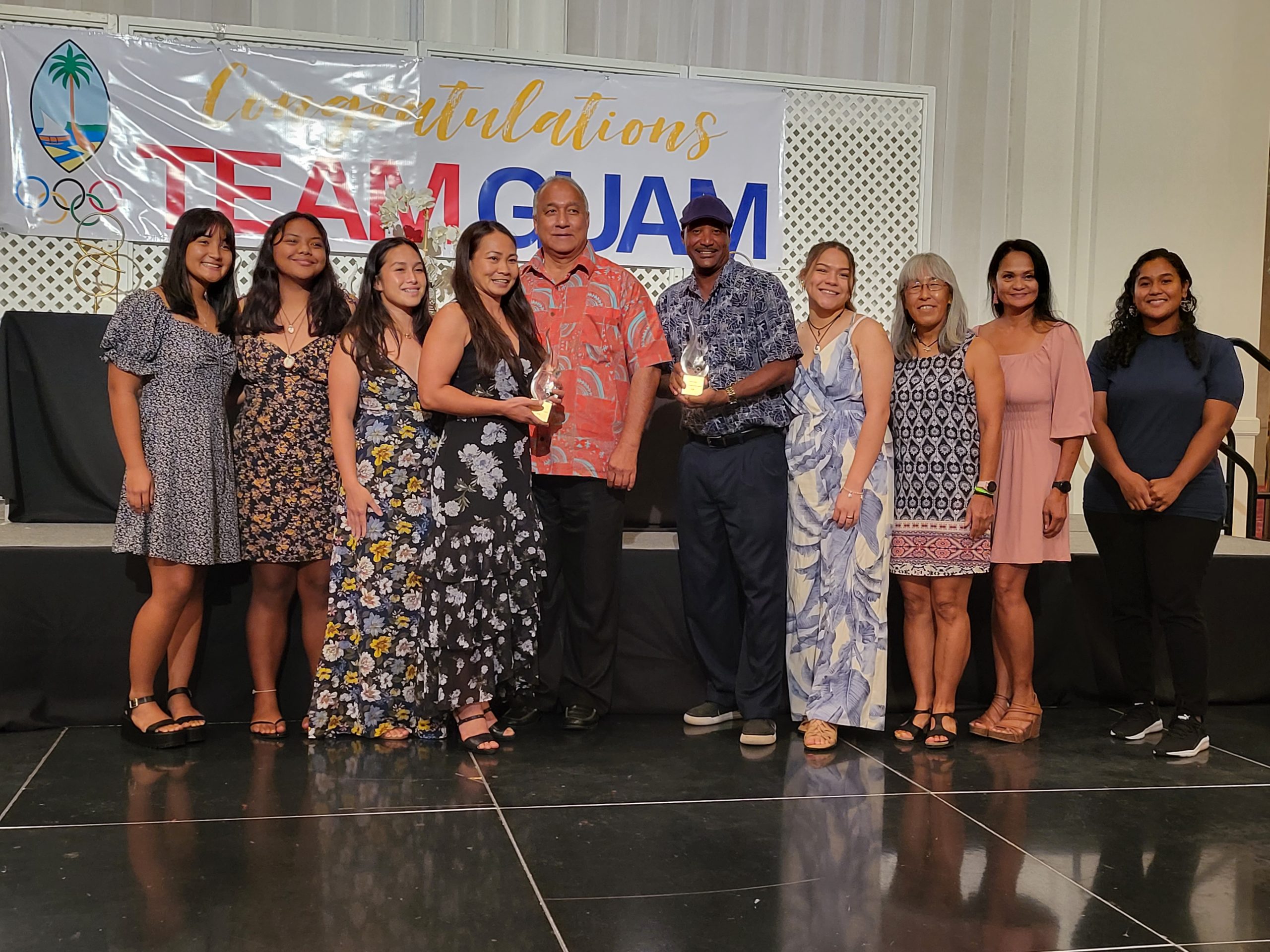 PRESS RELEASE – The Guam National Olympic Committee hosted a Team Guam Dinner and Awards in recognition of the achievements of our athletes during the Pacific Mini Games 2022 contested in the Northern Mariana Islands from June17-25, 2022.  The event was held at the Rihga Royal Laguna Guam Resort on Friday, July 8, 2022.

Chef de Mission James Borja welcomed the athletes and officials to a night of fun to reminisce the accolades of our contingent.  Since the 1999 Pacific Games hosted on Guam, the Pacific Mini Games 2022 was the best accumulative results produced by a Team Guam contingent and the most athletes and officials sent to a Pacific Mini Games, due to the proximity of our islands and the encouragement of our executives to support the staging of the Games in the Northern Mariana Islands.

Guam finished 6th in the medal count with 10 Gold medals, 5 Silver medals, and 11 Bronze medals, a total of 26 medals during the event.  The women dominated the medal tallies for Team Guam during these Games producing 9 of the 10 gold medals.

President Ricardo Blas acknowledged the hard work of all our athletes and officials leading up to and during the competition aspect of the Games and recognized the efforts of the GNOC and ONOC staff and support team.

Awards were presented during the evening for outstanding performances during the Games by President Blas and Chef de Mission Borja.  The following results were announced with plaques presented to the winners of each category:

Edgar Molinos of Team Guam Weightlifting was named Team Official of the Games as he coached Team Guam weightlifters to 7 Gold and 9 Bronze medals, accounting for 16 of Guam’s 26 total medals during the Games.  Nominees for this category include Joseph Tuquero of Baseball, Golf’s Daryl Poe, and Tennis’ Michelle Pang.

Female Sports Team of the Games honors were shared by Team Guam Va’a and Team Guam Golf as both teams attained a major team milestone during the Games.  This was the first Pacific Games event in which Va’a Women were able to clinch a silver medal, performing in the V12 500m event.  Women’s Golf’s last medal was an individual gold in 1999, 23 years later, our women’s Golf team delivered its first team medal, a silver stance on the platform.

Male Sports Team of the Games was also shared by Team Guam Baseball and Team Guam Golf for their silver medal podium finish during the Games.  Baseball was represented by most of the Junior National Squad who overcame odds with age and experience to finish second in the event.  Golf had its best finish in a Pacific Games in Team competition as both Men and Women’s teams brought home the silver medal in the Games.  This was the first time any team in the Pacific either led or was in a tied position throughout the course against a New Caledonia stranglehold on the event. Team Guam Tennis duo of Camden Camacho and Aarman Sachdev was also acknowledged for their bronze medal performance in the doubles event. They became the first tennis players since 1979 to stand on the medal podium.

Team Guam’s Female Athlete of the Games nominees included Nicola Lagatao and Jacinta Sumagasay of weightlifting, Manami Iijima-Martin of Triathlon and Athletics, and Genie Gerardo of Athletics.  Lagatao and Sumagaysay clinched three gold medals each during the Games in their respective weight divisions for the Snatch, Clean & Jerk, and Total lifts. Iijima-Martin accumulated three medals in two sports disciplines while Genie Gerardo became the first Team Guam female athlete to medal in a field event since the inception of the Pacific Games and Pacific Mini Games.  The award was shared by Sumagaysay and Iijima-Martin as they topped the panel’s achievement list.

Team Guam’s Male Athlete of the Games was presented to Ivan Sablan of Team Guam Golf.  Sablan became the first Team Guam male golf athlete to win an individual silver medal and a team event silver medal during the Games. Nominees for this category included David Bautista of weightlifting for his gold medal performance and Athletics Joseph Green who became the first Guam athlete since 1999 to qualify for the 100-meter finals.

The final recognition award was bestowed upon Iijima-Martin who opened and closed Team Guam’s historic endeavor with our first gold medal of the Games, as she swam, biked, and ran through the course in Rota outpacing the pack by more than three minutes during the Triathlon competition.  Two days later, she swam and ran past the competition in the Aquathlon for her second gold medal in Rota.  On the last day of the Games, she closed out Team Guam’s campaign with her third gold medal in Saipan as she even had time to stop for a beverage to regain her composure and crossed the finish line with a minute to spare.

President Blas emphasized the importance of acknowledging the continued hard work and dedication of our athletes, team officials, and management team and reminded all our athletes to thank their parents, coaches, and administrative personnel for their support. He also covered the upcoming activities GNOC and Team Guam have during the 2023 campaign which includes the 19th Asian Games in Hangzhou, China; 6Asian Beach Games in Sanya, China; 2ANOCWorld Beach Games from August 5-15, 2023 in Bali, Indonesia; 1Micronesian Games, July 2023 in Majuro, Marshall Islands; 7 East Asian Youth Games, August 12-19, 2023 in Ulaanbaatar, Mongolia; 6Asian Indoor & Martial Arts Games, November 17-26, 2023 in Bangkok, Thailand; 17 Pacific Games, November 19-December 2, 2023 in Honiara, Solomon Islands; as well as the qualifying stages to the XXXII Olympic Games in Paris France from July 26 to August 11, 2024.

Mix Plate provided entertainment for our athletes and officials in attendance.

GAMES COME TO A CLOSE IN SAIPAN
Loading Comments...