JFK UPSETS GW TO MOVE ON TO FINALS 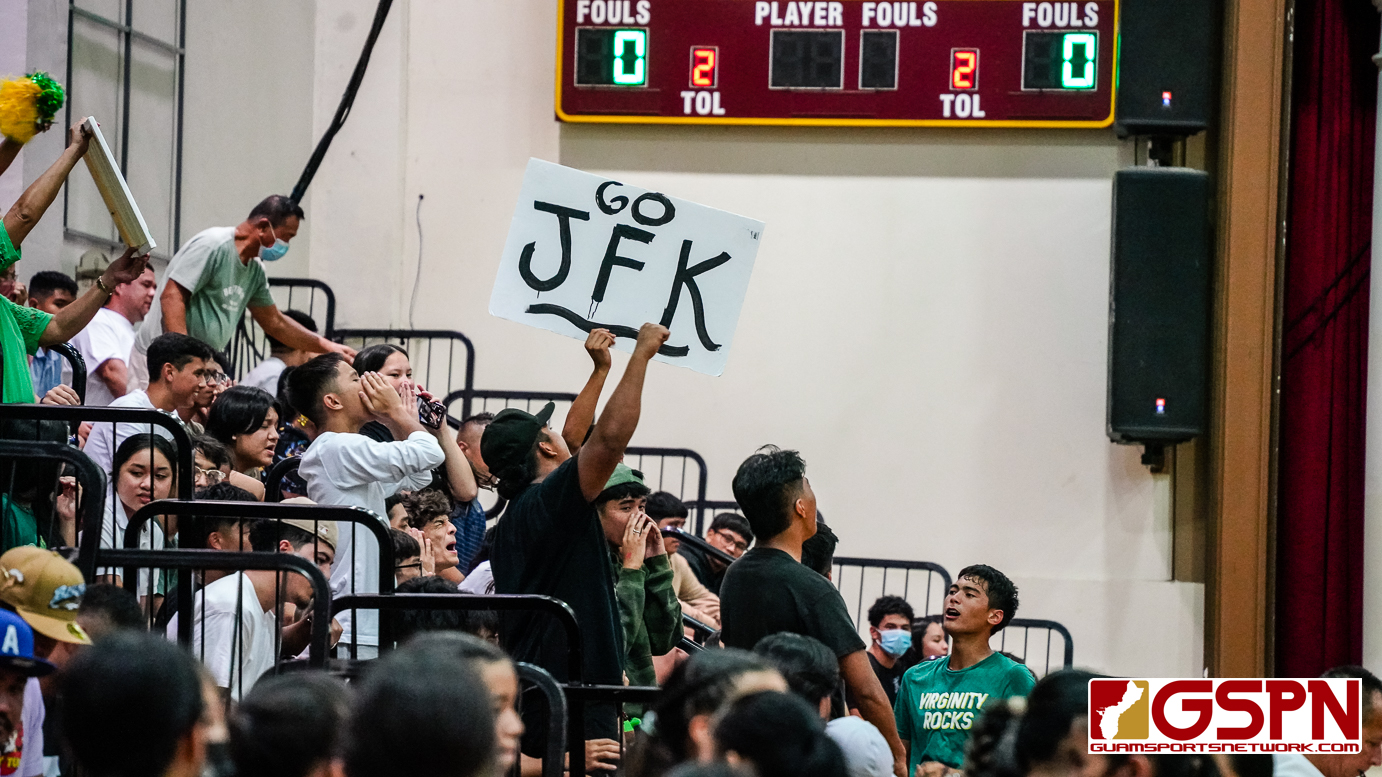 The Interscholastic Sports Association will crown a new champion this year after the John F. Kennedy Islanders upset the two-time defending champion George Washington Geckos in four sets 26-24, 20-25, 25-22, 25-16 Monday night at the Phoenix Center in Mangilao.

JFK will now face the Okkodo Bulldogs Friday night for the championship as the Bulldogs fought off the Sanchez Sharks in five sets in the other semifinal matchup.

“I’m not surprised with how she (Andres) played tonight,” said Pagdilao regarding Andres game stats. “She could do so much more…she just keeps hitting the net,” chuckled Pagdilao.

Andres and the Islanders went to work early in the first set jumping out to a 7-2 lead behind a kill and an ace from Andres and three kills from teammate Tommie-Lyn Santos.

The Islanders were on their way to making it a quick first set extending the lead to 17-8 scoring five straight points. During that stretch Andres added two more kills with Jodee Halili adding a kill and two straight aces from Philicita Rivera.

Later, with the Islanders two points away from taking the first set leading 23-16, the Geckos made their move. With two kills by Kamarin Guerrero, the momentum shifted to the Geckos side fueling an eight point run giving the Geckos the lead and set point at 24-23.

But back-to-back kills from Calvo and Andres regained the lead for the Islanders and a hitting error by the Geckos gave the Islanders the 26-24 first set win.

The second set was a different story as the Geckos began to find their groove keeping the score pretty much even throughout the set.

With the Islanders up 16-13, the Geckos, taking advantage of mishaps by JFK regained the lead scoring six straight points capped off by back-to-back aces from Elahna Gumataotao to lead 19-16.

A kill from Cherese Flores and a hitting error by the Islanders gave the Geckos the 25-20 second set win tying the game up at 1-1.

“We were kind of down at first,” said Andres. “But we decided to come together as a team and Maria was a great motivation for us.”

“Our confidence was a little beaten down,” added Pagdilao. “We were able to shake it off and focus on the next set.”

“We just knew it was a hiccup,” said Calvo regarding the second set loss. “I just told my team that no matter what, I always trust you guys and just be confident. If you make a mistake, shake it off right away.”

The JFK offense continued to produce in the fourth set scoring six of their first nine points off kills from Pagdilao, Philicita Rivera, Andres and three from Calvo to give the Islanders the 9-5 lead.

Up 13-10, The Islanders Halili extended the lead after recording a kill and two consecutive aces giving her squad the 16-10 lead and energizing the Islanders fan base.

Tasting victory at 20-15, the Islanders would get two free points off passing errors by the Geckos. With an ace by Calvo and Andres’s 13th kill, the Islanders found themselves at the brink of knocking off the defending champs at 24-15, after falling to the Geckos twice during the regular season.

“I just wanted to finish it already,” said Andres when asked what went through her mind at game point.

After a hitting error by the Islanders briefly extended the game, Philicita Rivera gave a back row set to Lyca Alvez who sent a shot over the net falling just out of the reach of a diving Geckos defender and falling onto the floor ending the reign of the two-time defending champs and sending the Islanders into the ISA Volleyball Championship game with a 25-16 fourth set win.

“It feels great. I always knew our team had it in us. We just had to be confident and I’m so proud that we came this far.”

“It’s definitely refreshing,” added Pagdilao. “We came into the game to play with no end goal. We just wanted to play good and finish the game.”

“We’re excited and we’re ready for the next game,” said Andres. “It just took a lot of hard work on our part and I’m glad that we were able to execute on the floor. I’m really proud of all the girls and hat we did today as a unit.”

With the win, the Islanders move on to play the Okkodo Bulldogs for the ISA Volleyball Title which is scheduled for this Friday at Southern High gym.

“We’re just going to do what we did today and be ready to play the championship game,” said Pagdilao. “We just need to be hyped up during the game and keep the energy up from the beginning to the end.”