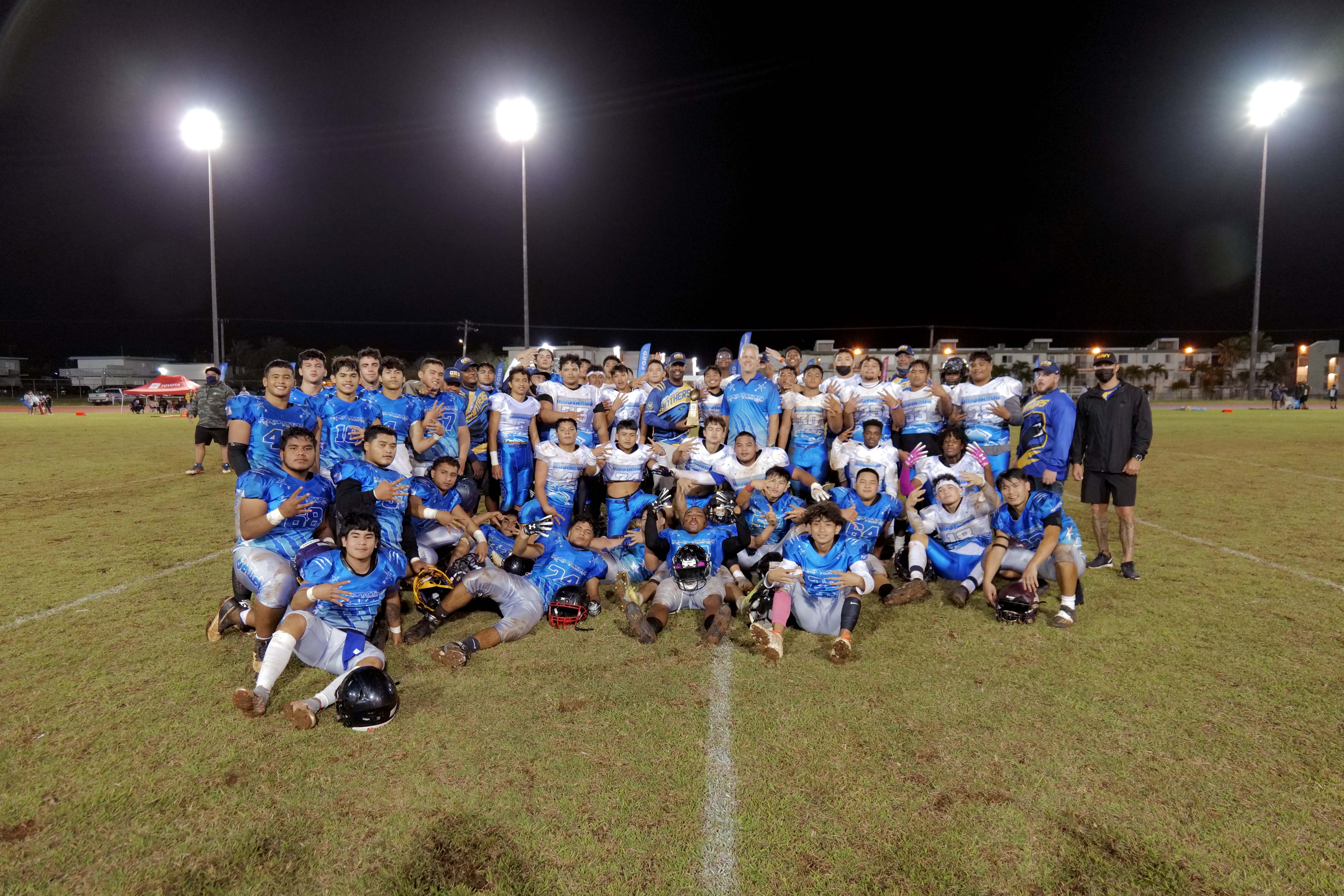 Catch the live broadcast of the 6th Annual Triple J High School Football All-Star Game at the GW Field on the stream below!

The Triple J High School Football All-Star game returned to action Friday night with the Mustangs defeating the Raptors 16-11 at the GW Football Field. The game was loaded with offensive stars, but it was the defensive all-stars who owned the evening with a game featuring eight total turnovers.

Vance Meno (FD) from the Mustangs was named the MVP with six tackles, a forced fumble, a sack, and a crucial tackle at the goal line which forced a turnover. “It feels good to get this coming in as a sophomore. I look forward to doing this for two more years,” said Meno.

The Raptors had the lead at halftime but were unable to find the end zone in the second half. The Raptors scored first after Josiah Quintanilla (Southern High) recovered a fumble which set up a 27-yard field goal by Alex Sojo (FD).

On the ensuing possession, Quintanilla forced a fumble giving possession back to the Raptors. Raptor quarterback Sojo threw a 30-yard touchdown pass to Isaiah Topasna (Southern) and it was quickly 11-0 in favor of the Raptors after a successful two-point conversion.

It was still the first quarter and the Raptors looked to run up the score, however, the Raptors were unable to score for the remainder of the game.

The Mustangs found the end zone in the second quarter with quarterback Aaron Johnson (Guam High) scrambling for a 19-yard score. Johnson rushed for a successful two-point conversion, and it was 11-8 at halftime.

The Mustang defense would cause havoc in the third quarter with Meno and Terrell Rosario (Guam High) forcing fumbles. The Mustangs took advantage of good field position and a pair of costly penalties against the Raptors to take the lead. Evan Brown (FD) scored in the third quarter with a goal line power run to go up 16-11 after Johnson was successful on another two-point rush conversion.

In the final quarter, both teams were unable to make any big plays. Defensive stars shined on both teams. The Raptors secured the victory after Cameron Brantley (Guam High) intercepted a pass late in the fourth quarter to end the game.

Sojo was having a good game up until the third quarter after he was forced to sit after getting injured. His regular season teammate, Meno, caused the injury on a tackle.

“I think he’s fine cause after the game he kept hitting me,” joked Meno.

Sojo was feeling it early, completing four passes in the first half for 63 yards. Sojo’s favorite target was Topasna who caught three passes for 59 yards.

“We made adjustments at halftime. We switched things up in the backfield and read the gaps in their defense which caused us to have a really good drive while running the ball,” said the Mustangs Caleb Murphy (FD).

Murphy had six tackles and an interception on defense and rushed four times for 23 yards on offense.

Teammates going against each other

Just like every Triple J all star game, teammates will go against each other. Friendly trash talk was heard before, during and even after the game. “All week at school it’s been heated up to this moment. We go up against each other in practice but it’s different during an actual game. We just wanted to get the best against each other,” said Murphy.

“It was good to out there and have fun after all the pain we had running and doing drills for the past six months,” said Meno. “There was some pushing and shoving but we all had fun at the end.”

Johnson was the game’s top rusher with 54 yards on seven carries and a touchdown. Brown rushed seven times for 38 yards and a touchdown. Jaren Meno (FD) accounted for 25 total yards with 13 yards rushing and 12 yards via one reception for the Mustangs.

On defense, Roman Sablan (GW) had five tackles, Rosario had four tackles for the Mustangs. Brown, Murphy, and Brantley each recorded an interception.