Ken San Nicolas has made the big move to UOG where he’ll be at the forefront of UOG Triton Esports. 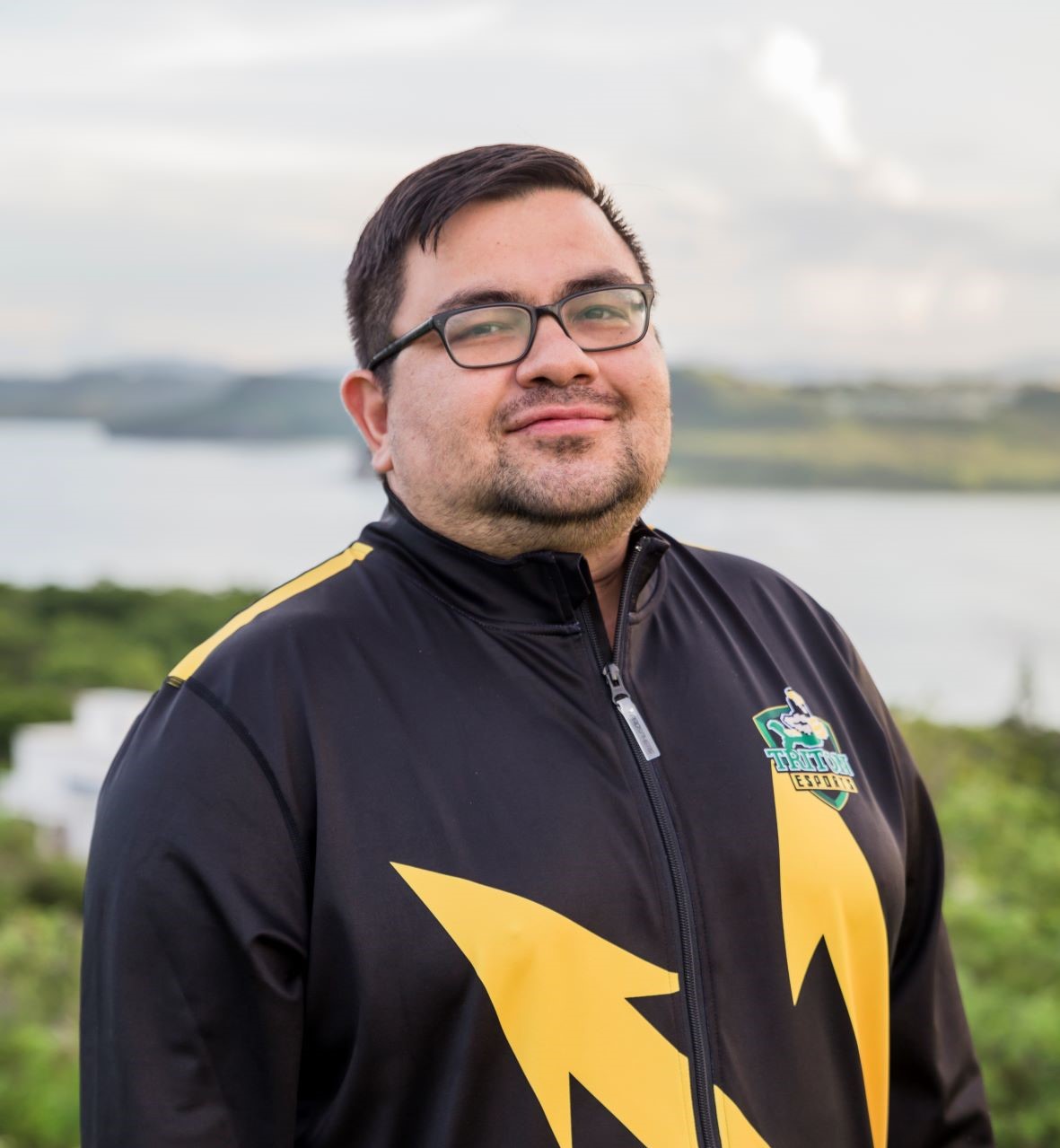 Founder and President of Latte Esports Ken San Nicolas has made the move to UOG to become their Esports Manager! The former matchmaker of the PXC, San Nicolas leaves KUAM after 16 years to pursue his passion to further grow the Esports scene on Guam and their involvement in Esports on a global scale.

We caught up with Ken to give us details of his new position at UOG and what he’s got in store for the program!

GSPN: Making the move to UOG to head their Esports program is a big deal! What’s your official title there and what does your new job entail?

Ken: Making the move to the University of Guam was a big step that I contemplated for some time before accepting. The University’s faith in esports and its support of a collegiate program was a driving factor of me pursuing the position as ‘Esports Manager’.

The job entails ensuring the success, growth, and development of the program at every level. This can range from the day-to-day tasks directly with the students like athlete recruitment, training, intercollegiate match scheduling etc to longer term developmental projects like the buildout of a permanent esports “arena” or space on campus, creation of an esports industry-focused curriculum for the athletes, event management and organization, and of course, procuring funding for the program through sponsors, grants, donations, and events.

GSPN: Colleges around the world are offering scholarships to Esport athletes. What does it mean to you that you can provide that same benefit to Guam’s local Esport athletes?

Ken: First, I’d like to recognize John Wiglesworth, who was the former esports coordinator and was the one who fought tooth and nail to get scholarships for the athletes. That said, it’s a huge help. A college education is vital and any savings that a student can get towards their tuition costs help. Additionally, the esports program at Triton Esports is not easy. It demands 20+ hours a week from the athletes — less than half of those hours being actual in-game training. They are required to work out twice a week with their physical fitness coach, they are required to see their mental health coach every other week, they study “tape” or replays, have practice sessions that are just data review and communication focused etc. It is a lot. Providing a small scholarship stipend as a reward is a small token of our appreciation to the program. Currently, that amount is competitive among our peers in other esports programs.

However, I’d hope that in years to come, we’d be able to offer larger scholarships to more athletes. It is certainly on my radar, but of course the output must match that financial commitment so hopefully someday in the near future.

GSPN: You’re the President and founder of Latte Esports and now at UOG. How do you bridge what you’ve been doing at Latte with what you’re going to be doing with UOG now?

Ken: I created Latte Esports with esports integration into education in mind. I’m a firm believer that competition and teams teach vital characteristics and skills that the traditional classroom cannot do efficiently. I’m talking about accountability, teamwork, communication, responsibility, humility, losing with dignity and celebrating with grace etc. Sports teach those things, in my opinion, better than any other platform. That’s why they are vital at every level of education. Esports is no different, and can appeal to a demographic of participants that could be larger.

I’m quite familiar with event management and tournament organization as I’ve done those things for years. So, in those aspects, the transition will be relatively straight forward. With Latte Esports, most of my focus was recreational teams as well as high school team focused. College is a natural progression of that. I hope that the community of student gamers we’ve built on island will continue to pursue their passions and continue to participate in esports after high school and with Triton Esports.

Esports itself is the medium which an institution should use to introduce students to other opportunities. Esports provides a unique gateway to a wealth of opportunity post-college that players may not know about. There are not only jobs in the esports industry, but jobs in other industries that could fully utilize the knowledge, skills and abilities attained from a developed esports program. Athletes can obviously succeed as a pro athlete, but there is more out there. They could work in production, technical directing, broadcasting, be a commentator or analyst, be an event organizer etc. Esports is not the only industry that utilizes these jobs. Knowing these skills now gives them a valuable tool set that they can use in another industry should esports have sparked that passion for them.

GSPN: What are some of the big events you’ve got lined up for this year?

Ken: Naturally, our athletes will compete versus the best collegiate esports programs in the nation under the NACE banner. Just this past Monday, 4 of our athletes competed in the National Final for Super Smash Bros Ultimate. 4 athletes from UOG were recognized among the top 32 in the nation in that final! It’s an incredible feat, especially with the latter part of 2021 being the program’s official induction into the National Association of Collegiate Esports. The new NACE season has begun so starting this week, the athletes are back at it, hoping to improve on their experience in CS:Go, Smash and League of Legends this year.

Locally, the athletes and staff of the program have events for the community planned. In March, we will host an esports tournament every week to celebrate the 70th anniversary of the University of Guam. A Charter Month if you will. This will consist of 4 weekends of esports content free for all on island to participate in or spectate.

In the summer, we are in the early planning phases of an “esports boot camp”– a two to three weeklong summer camp for middle and high school students. This camp will consist of technical skill development of several popular titles on island but will also entail leadership training courtesy of the National Guard. A portion of every day will be devoted to teaching these minors how to do the fundamental functions of an esports event. This will range from how to create a bracket, how to set up and operate a twitch stream, basic principles of esports commentary and casting, project planning and time management, and other topics. The final days of the camp will culminate with a few tournaments run by the camp attendees themselves. Due to the nature of COVID I can’t guarantee that an in-person camp of this nature will happen, but we are strongly pushing for this.

The tail end of the year will have much of the same. Another 4 weeks of tournaments in November and the 2nd annual Island Esports Awards in December.

As always, interested viewers can catch our athletes and the tournaments we host at https://www.twitch.tv/uogtritonesports

UOGTritonEsports And that’s all just for the University of Guam!

On the recreational side,  Latte Esports has scheduled dates for the entirety of 2022. Depending on where the development of local esports is at the middle and high school level, Latte Esports may host a free series of events for that particular student demographic.

However, I have high hopes that we will see an official esports calendar for high schools by the time the next school year begins.

GSPN: If there’s anything more you’d like to add feel free to add!

Ken: I feel like I’ve rambled quite a bit and it’s only because I know that esports is on the cusp of seeing a huge spike in growth locally. I urge any student at the middle school or high school level who wants to participate in esports for their institution, to be assertive and take initiative. Make your voice heard with your athletic directors, go out and be a part of your schools gaming club or esports club. Or form one if it doesn’t exist. Let your administration know that you are passionate about being a part of that.For those who are attending college or are on the fence about whether they should enroll or not, if esports is in your interests, reach out to us. Check us out on discord or watch streams of Triton Esports. The program is one of a kind and is meant to enhance and assist your college experience. Let us be a part of that pivotal journey in your lives.