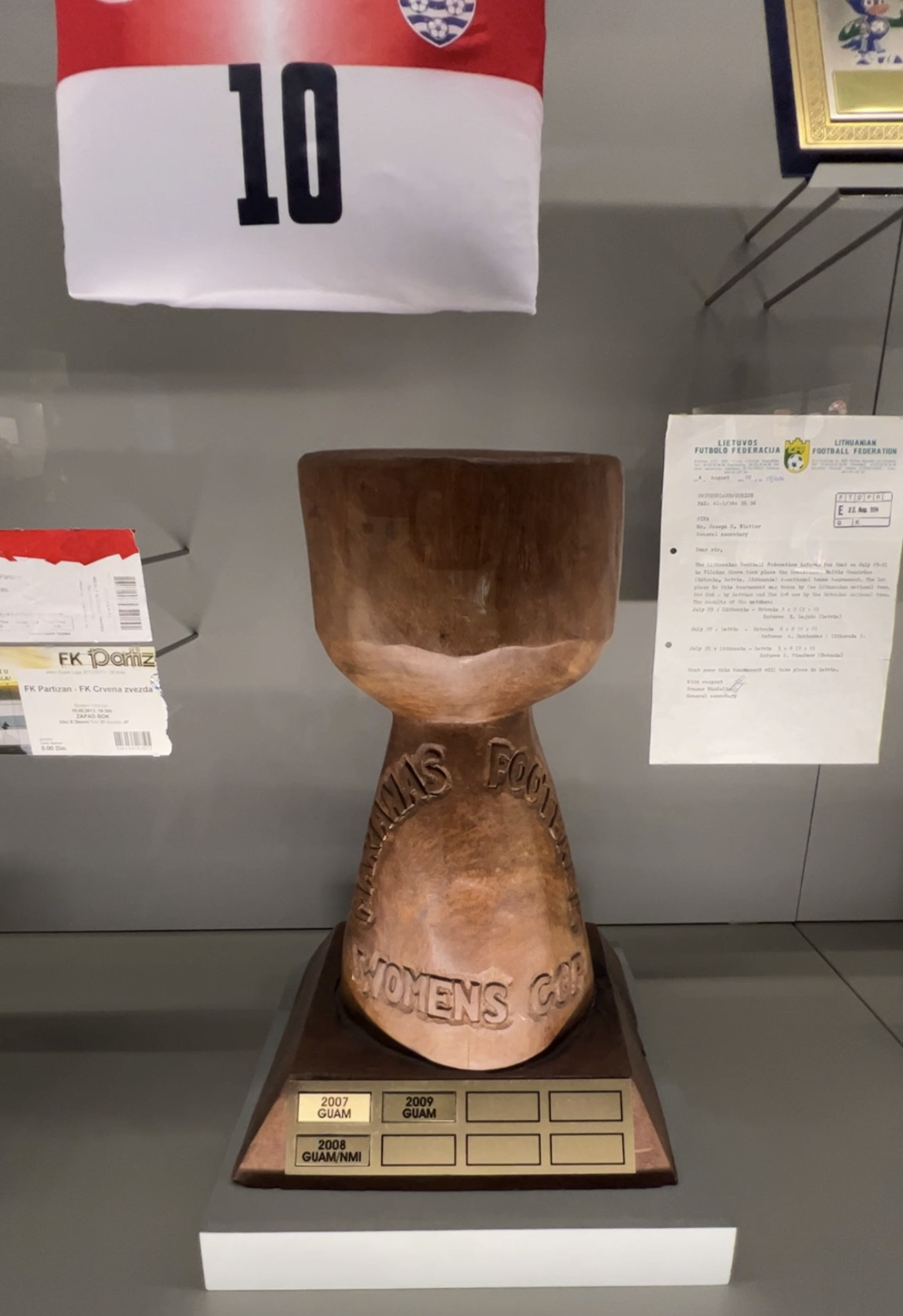 PRESS RELEASE – The original Marianas Cup trophies officially have a new home in the FIFA Museum with the opening of the 211 Cultures. One Game special exhibit earlier this month in Zurich, Switzerland.

The Marianas Cup, originally devised to be a tournament featuring both the men’s and women’s senior national teams from Guam and the Northern Mariana Islands in a home-and-away format, was first contested in Saipan in March 2007. On April 1, 2007, Guam hosted the next match of the tournament.

Beginning in 2008, the tournament became an annual event with Guam and NMI taking turns each year to host. The tournament’s large perpetual trophies made of ifit wood and carved into a latte stone shape traveled with the winning teams. The tournament in its original set-up, concluded in 2010, and later continued with different youth national teams from Guam and NMI competing under the tournament name.

“The first Marianas Cup tournaments were the purest and embodied a true derby feeling,” said Dominic Gadia, captain of the Guam Men’s National Team when the tournament was first introduced in 2007. “The early matches were heavily reliant on players available domestically and both islands had yet to source national team players from abroad. What I can say is that the squads from both islands featured players who have become trailblazers for their respective football association. I don’t think there was such a rivalry between Guam and NMI in football beforehand, so this tournament became the one and only time each island would compete for bragging rights.

“I think that’s what the trophy represented initially – who was the better footballing team in the island chain. Since both football associations were developing, I think the tournament also served as a measuring stick for how far along we had progressed. For me, winning away, lifting the trophy in their home field at the Oleai Sports Complex then, was an unforgettable experience, but it was also one you’d hope your opponents don’t experience when the tournament returned to Guam,” Gadia added.

In January this year, FIFA Museum sent out requests for objects from each of the 211 FIFA Member Associations representing their respective football culture to showcase in its newest exhibit ahead of the FIFA World Cup Qatar 2022™. A handful of former and current national team players, as well as coaches and GFA staff, were polled on possible items to send to the FIFA Museum.

By the end of February, the Marianas Cup trophies were selected to send as Guam’s contribution to the exhibit. Thanks to the professional team at Guam Pak Express, the trophies were carefully packaged in a customized wooden crate and sent to Zurich following FIFA Museum’s instructions the first week of April. The shipment’s total weight was 86 pounds, with each of the trophies weighing about 40 pounds each. The trophies – one for the men’s tournament and one for the women’s tournament – were carved by the late Master Carver Robert Taitano.

“I’m a bit sad that the trophies have left the Marianas so soon – I think it would have been nice for some of the newer generation of players from both islands to experience lifting it,” Gadia said. “It was our one and only trophy to compete for, but I hope the museum can help showcase football in the West Pacific. Hopefully, its presence in the museum reminds both islands of the original tournaments and paves the way for recreating the derby spirit between the islands.”

The exhibit officially opened to the public on Nov. 11. All 211 FIFA Member Associations contributed cultural or historical items of significance, including decades-old documents, used tickets from significant matches, other trophies and medals, jerseys, popular fan merchandise, and other items. For the special 211 Cultures. One Game exhibit, FIFA Museum selected to feature the women’s tournament trophy due to limited space, but plans to showcase the men’s tournament trophy for another exhibit. The exhibit also features a space called “Heartbeat” dedicated to global football fans as well as a large multi-player digital quiz featuring 211 questions related to each FIFA Member Association. More information about the exhibit is on the FIFA Museum Web site at https://www.fifamuseum.com/en/exhibitions-events/special-exhibitions/211-cultures-one-game/

Information about the exhibit’s pre-opening event are also on the FIFA Museum Web site: https://www.fifamuseum.com/en/blog-stories/blog/grand-opening-of-new-special-exhibition-211-cultures-one-game/