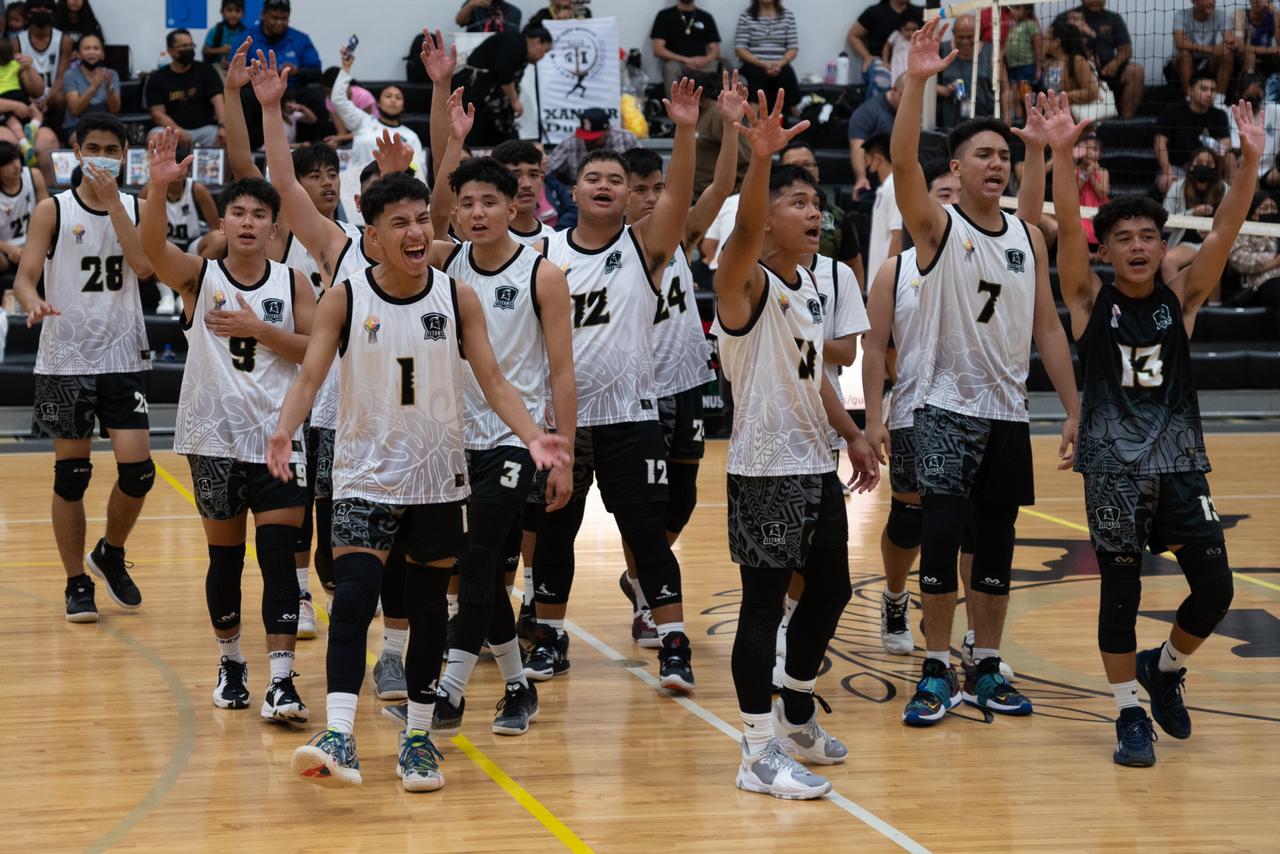 The Tiyan Titans finished their regular season undefeated at 12-0 after defeating the GW Geckos in straight sets 25-19, 25–17, 25-23 in the ISA Boys Volleyball league Tuesday night at the Tiyan gym. The Titans completed a perfect regular season without losing a set. 36 sets won, no loss.

Even with the pressure to maintain their perfect season, Titans outside hitters Xander Duenas and Gerald Malana combined for 19 kills and two aces to lead the Titans.

“We felt a lot of pressure going into this game to try and keep the streak alive,” said Malana. “But we were ready for anything honestly. We just needed to clean up our mistakes and play efficient and stay focused.”

“In the beginning of the season we never really thought of going undefeated or not losing any sets,” said Duenas. “But going through the season the pressure built up but our seasoned players, especially our seniors, stepped up big tonight.”

The Titans started the game firing on all cylinders jumping out to an early 6-2 lead behind a pair of kills each from Malana and reigning MVP VJ Rosario. But the Geckos would fight back capitalizing on multiple errors by the Titans to take a slim lead.

The tables would turn, and Tiyan would put a run of their own scoring seven straight points behind two kills from Anthony Angoco and an ace by Duenas to take back and extend their lead to 14-7.

Later in the set with Tiyan leading 23-19, back-to-back kills by Duenas and Dominic Pelobello would seal the first set victory.

The second set would be no different. With a 3-2 lead, Tiyan would go on their first of two runs in the set. Behind a kill by Rosario and back-to-back aces from Carlos Ongpauco and a block from Christian Catt, the Titans built an 8-2 lead.

Leading 8-5, the Tiyan defense went to work behind Catt’s three blocks and a kill to give his team a 16-5 lead.

Ahead comfortably 23-17, back-to-back kills again by Duenas and Pelobello would give the Titans the second set victory.

Down two sets to none, the Geckos got their second wind jumping out to a 5-0 lead to start the third set and later up 10-5 behind a block by Matthew Magaling.

“We were a little rattled at that moment, but we didn’t doubt that we could turn things around and win the set. A quick time out by our coach to settle us down and to get us to refocus was what helped us out.”

Malana credited the bench and the home crowd’s energy as the Tiyan motivation to coming back strong.

Down 11-7, the Titans would go on another run killing the momentum of the Geckos and tying it up at 11 behind a massive kill from Malana. Matching the power of the Titan hitters, GW’s Louis Montejo provided his own big kill to tie the game up at 13-13.

With the game at 21-20, a hitting error by GW and back-to-back kills by Duenas and Rosario, the Titans found themselves at game-point leading 24-20. The Geckos would put up a valiant attempt at a comeback pressuring the Titans to commit three consecutive errors to bring them within one point, but reigning MVP Rosario would put an end to the threat with his sixth kill of the night to give the Titans the win.

Tiyan finished the regular season with its record unblemished and having only played in 36 sets for the season their focus has always been on the same path towards the championship.

“We’re not really focusing on that (undefeated season), what it boils down to is the top four teams fighting hard for the championship,” said Titans head coach Rod Pama.

Pama’s philosophy is simple and it’s one that he has emphasized to his team from day one. That his athletes chose the path they want to take and stick to that path and if that leads to a title than it was because his team stayed focused on the path they chose.

Tuesday’s game was also Tiyan’s senior night where they recognized all 12 seniors on the team. Even with the number of players graduating, Pama believes the program will remain competitive with the returnees and the up-and-coming underclassmen.

“The program will be okay. Our junior varsity team is undefeated only losing one set all season and we have talented underclassmen,” said Pama. “We establish in our JV program the need to develop their volleyball IQ because it’s not just about physicality or strength and power, but their understanding of the game on all levels.”

With a bye on the last day of the regular season, the Titans intend to remain laser focused on what they must do to finish the season next week and repeat as champions.

“After celebrating the end of our regular season today, it’s back to work tomorrow,” he said. “All of the top 4 teams have a great sense of the court, they are all well coached and all four will be fighting for the chance to bring the trophy back to their school. It’s just a matter of who executes better.”

Gerald Malana added that his teams key to repeating as champions is as simple as “practice and hard work.”

The next two games (playoffs) for the Titans will be the last for coach Pama and a handful of players he’s coached since their middle school years at Untalan Middle School such as Duenas and Rosario to name a few.

“They’re like a second family to me and I’ve been blessed, coaching here at Tiyan, to have many players come from my Untalan program…so it was easy to mold them as far as players and athletes because they understand the system,” said Pama as he spoke with some emotion about his seniors.

“Xander (Duenas) was with me since sixth grade and to see him grow from a kid who was learning the sport to becoming one of the most prolific hitters that we have in our program, and to see his growth, it makes you proud as a coach to see him develop not just as a player but as a young man.”

Duenas credited the team’s success and their dominance this season to his longtime coach and mentor.

“He (Coach Pama) is the team,” said Duenas. “We wouldn’t be where we are today without him. Even if we have individually good players, Coach Pama was the one who welded us together to be the championship caliber team we are today.”