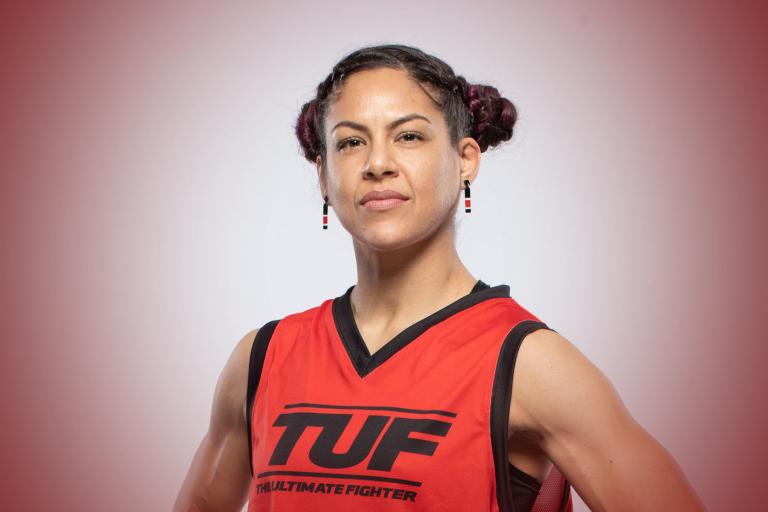 “A black belt is a white belt that never gave up,” said Brogan Walker.

“It’s super cheesy but that’s the advice I give to young girls in the sport. Just work on your craft and be better each day, especially on days when you don’t feel like it.”

Eight years ago, Walker wrote in her journal that she was going to be in the UFC one day. This weekend, Walker will enter the UFC Octagon with her Guam flag raised high.

From the PXC to Invicta FC to the UFC, the path to get to this point was not given – it was earned.

Walker was on Team Amanda Nunes on the UFC’s Season 30 of The Ultimate Fighter: Team Nunes vs Team Pena as a flyweight. She earned her spot to the finale after defeating two flyweight opponents on the show, defeating Hanna Guy in the quarterfinals and Laura Gallarde in the semifinals (both via unanimous decision). The victories set up a finals match vs Team Julianna Pena’s finalist Juliana Miller. The winner gets a nice UFC contract.

The fight will be free and live on ESPN or ESPN+ this Sunday (Guam time), tentatively as the second fight on the main card which airs at noon on Guam. The fight card is called UFC Fight Night: Santos vs Hill and will start with the prelims at 9 am CHamoru Standard Time.

During a zoom conference with media members and sponsors set up by manager Lloyd Cubacub on Tuesday, Walker took time to meet with everyone which just so happened to also be her 34th birthday.

Governor Lou Leon Guerrero was also on the conference and had some words of encouragement for Guam’s first female fighter to take the stage in the largest fight production.

“Guam is very proud of you and we just want to show you so much love and support. Do your best and make us proud,” said Gov. Leon Guerrero.

Walker’s TUF coach, Amanda “The Lioness” Nunes, got her redemption last weekend and defeated Pena to win her bantamweight belt back at UFC 277 in Dallas, Texas. Nunes is known to be the top pound-for-pound female fighter in the world. “It was an inspiration to work with Amanda Nunes. She actually messaged me after her fight telling me it’s my turn now,” said Walker.

“It’s crazy for a fighter (Nunes) like that to take the time to message me after her fight. It just shows the amount of support she has for her team,” said Walker.

Walker had to overcome adversity during the show. She had suffered a grade 1 MCL tear but still trained hard under the tutelage of the coaches from Nunes to earn her spot in the finals.

“My knee is feeling great now. Thank you to my local trainers Tasi Ada and Steve Oshiro for helping me,” said Walker.

Fight week is truly a busy week for Walker and her team. There will be no birthday celebrations, Walker went straight to the gym to work after the zoom conference to work on her last minute preparations and ensuring her weight is on point.

Walker has a professional record of 8-2 and will be going against Miller who is 3-1. Juliana “Killer” Miller is a known grappler and has two professional victories via submission.

Guam will be watch you Brogan! Good luck and all the best! Biba!

GLORIFIED 9: AMBROSE VS. CASTRO RESULTS IN A DRAW
AMBROSE WINS HEX BELT DOWN UNDER
Loading Comments...