It was a thrilling night of IIAAG boys basketball at the Phoenix Center Friday evening as two of the leagues powerhouse teams went head-to-head. Despite an equally strong showing for both teams, it was the home team FD Friars who were able to fend off a near comeback by the Okkodo Bulldogs to edge out the 53-49 win. 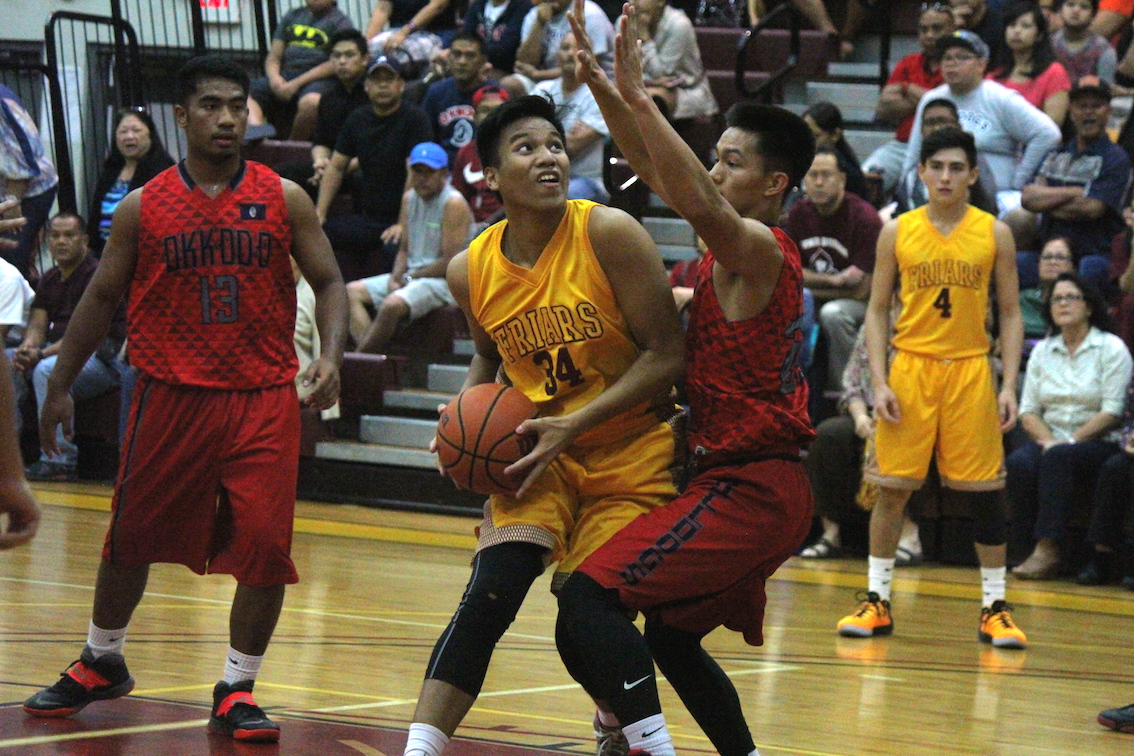 It was a thrilling night of IIAAG boys basketball at the Phoenix Center Friday evening as two of the leagues powerhouse teams went head-to-head. Despite an equally strong showing for both teams, it was the home team FD Friars who were able to fend off a near comeback by the Okkodo Bulldogs to edge out the 53-49 win.

“Coming into the game having lost to them in the preseason, we were prepared mentally and just played the best of our abilities and I think that’s what lead us to pull out this win”, said the Friars’ Isaiah Sablan on the team’s focus heading into the game.

FD’s Sablan played a huge role in the game with his aggressive offense and consistent play as he lead all scorers with 12 points while teammates Roy Taimanglo and Tomas Calvo netted 11 each. Austin Blaz lead Okkodo with 10 points while Liann Torres added 9.

With the Bulldogs holding a slim 41-37 lead heading into the final quarter of play, the Friars knew they had to open the quarter on a high note. FD’s Sablan, started off the scoring run with an aggressive take to the hole to narrow down the Bulldogs’ lead.

The Friars’ David Sakazaki made his presence known in the quarter as he was able to record a block and board that FD converted into a scoring opportunity as Taimanglo hit a clutch shot at the top of the key to tie up the game 43-all.

Okkodo’s Aiden Ferrara and Nate Lorenzo were relentless on defense with their tenacious ball pressure that helped to force multiple Friar turnovers.

With time winding down and the game on the line, Sablan went a perfect 4-for-4 from the charity stripe to give his team the slim 47-45 lead with just over three minutes remaining.

Aggressive play ensued, but the Bulldogs were unable to convert on the offensive end, giving the Friars the opportunity to seal the game which Sophomore Tomas Calvo did not hesitate to capitalize on.

Calvo scored FD’s final six points, including a layup off a clutch steal and assist from Taimanglo, to seal the hard fought 53-49 home victory.

“Being a sophomor,e nobody would really expect you to step up in a moment like that, but I was feeling it and I knew that I could make that shot to help seal the game”, commented Calvo on his late clutch performance.

The Bulldogs struggled from the field in the first few possessions of the first quarter, giving the Friars the opportunity to jump to a 17-10 lead thanks in part to the speedy duo of Taimanglo and Josh Paulino.

FD showed promise as Cole Merfalen and Sakazaki did damage underneath the basket (21-13) but the Bulldogs clawed their way back after a putback by Liann Torres and an acrobatic lay-in by Austin Blaz (26-24). Blaz ended the quarter with a three just before the buzzer to make the score 30-28 heading into the half.

Okkodo’s Nate Lorenzo put on a display as he was able to tie the game up twice before settling the score at 32-all, thanks in part to his defensive steals.

This would set the foundation through which the Bulldog’s Torres and Ferrara extended the lead to 37-32 after a pair of and-one plays.

FD’s Sablan and Taimanglo continued their clutch play with a three and layup that tied the game at 37 and force a timeout. This was short-lived, however, as Okkodo’s Enriquez and Snively scored immediately out of the timeout to establish a 41-37 lead heading into the fourth quarter.

The Guam High Panthers won a thriller against the visiting Sanchez Sharks 40-39. The Panthers led the entire game until 5 seconds left in regulation. The Sharks’ John Buan hit a clutch 3-pointer to go up 39-38 prompting Panther coach Joe Taitano to call a timeout.

The Panthers got the inbound pass to Rodney Taitague Jr. and he launched a 3-pointer but was fouled. Taitague missed the first free throw but made the last two from the charity stripe to give the Panthers the 40-39 victory.