No lead is truly safe in the IIAAG boys basketball league and the GW Geckos learned just that Saturday after almost surrendering a 21 point lead to the visiting St. Paul Warriors, holding on to win 88-87. 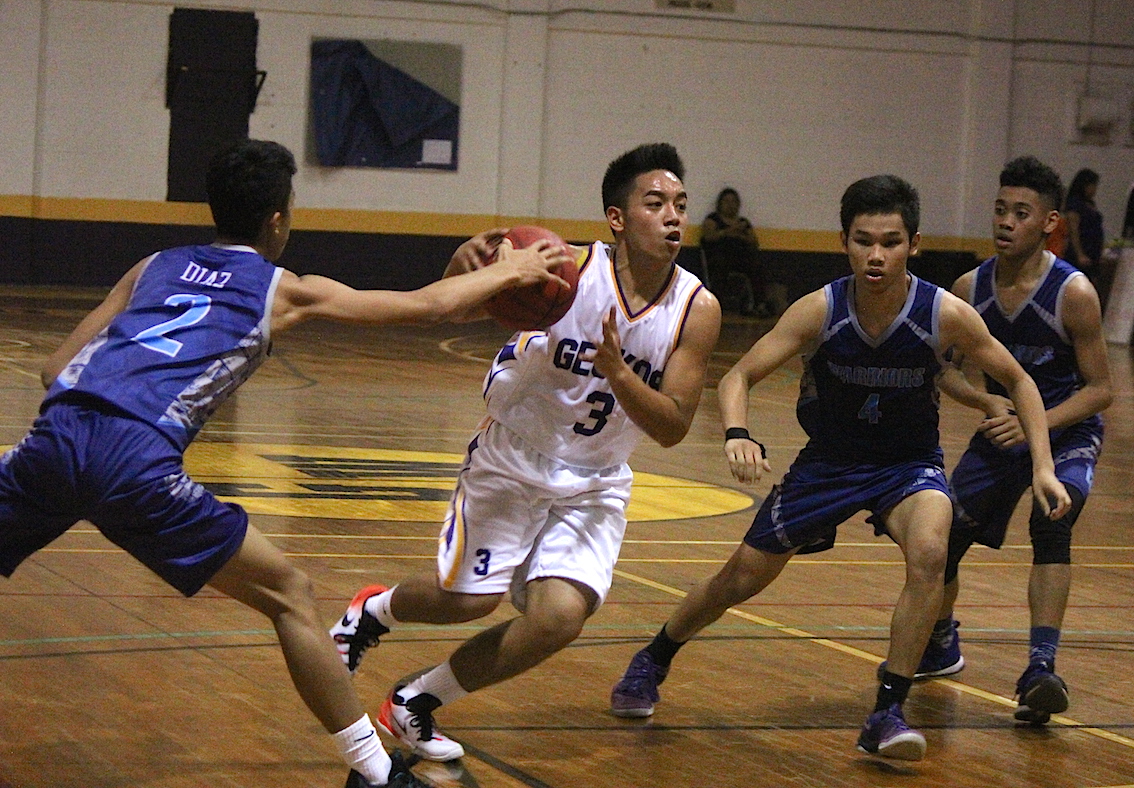 “The game is never over until that final buzzer sounds,” said Gecko shooting guard Karl DeLeon.

No lead is truly safe in the IIAAG boys basketball league and the GW Geckos learned just that Saturday after almost surrendering a 21 point lead to the visiting St. Paul Warriors, holding on to win 88-87.

Gecko Devin San Agustin hit a pair of 3-pointers with 3 minutes left in the 3rd quarter to go up 65-43, their largest lead of the game. But the Geckos had three key players in foul trouble and committed turnovers in the 4th quarter as momentum quickly shifted in favor of the Warriors.

Freshman Jamar White looked like a veteran in the 4th quarter scoring 6 points during a 13-0 run with four minutes left in regulation for the Warriors. The Warriors lived up to their name and fought till the end with stifling defense, intercepting four passes that led to lay-ups as they made their comeback.

White scored another lay-in with a minute left in regulation to cut the deficit to 83-80. The Warriors were forced to foul Gecko guard Fabrick Ramos and he made one-of-two free throws to increase their lead to 84-80.

The Warriors’ Josh Gatchalian quickly inbounded the ball and found teammate Eric Alegre to cut the lead to 84-82. The Warriors went for the steal on the ensuing possession but the Geckos were able to break the press as DeLeon scored to put the Geckos up 86-82.

Alegre put up a shot on the Warriors’ next possession and missed, but White was there for the offensive rebound and he passed the ball to a teammate for a bucket to trail 86-84. The Warriors fouled Kyle Gaitan who made one-of-two free throws for the 87-84 lead with 20 seconds left.

The Warriors turned the ball over on their next possession and DeLeon made one-of-two free throws to secure the victory with 3 seconds left leading 88-84. White made the 3-pointer before the final buzzer for a final score of 88-87.

The Geckos were on fire to start the game, stunning the Warriors with an early 8 point lead with Hezekiah Cruz scoring 5 quick points. Jason Diaz from St. Paul was a pest on defense recording 4 steals in the first quarter, scoring 6 points to tie the contest at 16-16 after the first period.

The Geckos had one of their best quarters of the season in the second quarter. Gaitan scored in the paint, Cruz and DeLeon continued to hit the mid-range jumpshots as they built a 51-35 lead by halftime.

The Geckos were unconscious from the field shooting 60% by halftime. Ethan Alegre, twin brother of Eric, provided much of the offense for the Warriors scoring 16 points for his team by the break.

Momentum was still in the Geckos’ favor coming out of the locker rooms, Ramos scored transition baskets and Gaitan had his way in the paint before San Agustin hit the two 3-pointers for their largest lead.

Wendy’s players of the game Karlo DeLeon and Kyle Gaitan helped hold off the Warriors just long enough to get the win.

The Alegre twins were vital in setting up the comeback. Ethan Alegre scored 24 points and Eric Alegre had a double-double with 25 points and 11 rebounds for the Warriors. Diaz was limited in minutes before fouling out with 10 points, 6 steals, 5 rebounds and 4 assists. White scored 12 of his 16 points in the final period.

DeLeon and the Geckos were relieved to secure the victory. “Coach (Lawrence Luces) told us to keep our composure during a timeout as they were making their comeback. He said we needed to block out the crowd; it’s just us versus them on the court,” said DeLeon.

The Warriors won the JV game 46-38 over the Geckos. Nichika Fermin and Reo Aiken each scored 13 points to lead the Warriors, Jericho Snaer led all scorers with 19 points for the Geckos.