The Silver Raiders ended their perfect season with a BFL championship three-peat after a gritty and entertaining defensive showdown against the Angels. The Raiders walked away the winners in a close 6-3 game, ending the 2015-16 BFL season. 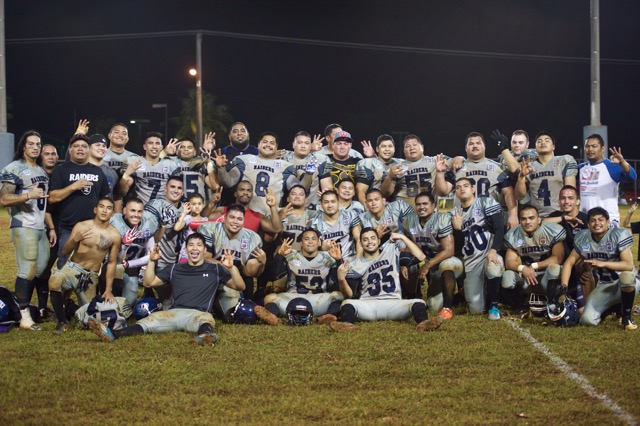 It is what every football fan loves to see. Two determined teams going at it toe-to-toe and giving a hundred and one percent. For the IT&E Silver Raiders, that extra effort was just enough to get passed the Micronesia Renewable Energy Hal’s Angels for the 2015-2016 Budweiser Football League Championship. After a hard fought game, the undefeated Raiders walked away winning by the slimmest of margins, 6-3.

The victory completed a perfect season and the Raiders remain the only champion the league has seen. Although the Angels had to taste the agony of defeat, they earned the right to hold their heads up high. The true winners last night at Hal Shiroma Memorial Football Field in Dededo were the fans. They could not have asked for a better display of heart from both teams.

Early on, it looked as if the Angels were poised to deliver an upset. They went up early when league Defensive Most Valuable Player Chris Santos booted a 36-yard field goal through the uprights to give his team a 3-0 lead.

But just like champions do, the Raiders responded shortly after. This time it was Danny Manibusan, the league’s Offensive MVP showing just why he won the award, connecting with Jacob Torres in the back off the end zone for a leaping touchdown. The score came in the second quarter and was the difference maker.

They failed to convert the point after. The Raiders threatened to add more points to their lead before halftime, but Santos intercepted Manibusan to keep the score close.

Despite the Angels defense coming up big time and time again, the Raiders defense matched them and held Steve “SP” Phillips and the rest of the Angels grounded. Marvin Manibusan had some success on the ground but the Angels could not move the chains consistently.

Fittingly, the Raiders entire defensive squad was awarded the game’s MVP award that was presented by Ambros Incorporated General Manager Tom Shimizu. The defense, led by veteran Ryan “Chairman of the Board” Rios came up big when they needed too.

“Communication (was the key). We talked a lot,” said Rios after the game. “We know what they were going to throw,” he added. “We don’t gamble too much. We just played basic football, let our talent flow and let our athletic abilities take care of itself.”