As the third week of high school rugby action resumed Saturday at Okkodo High School, the Southern Dolphins recovered from a tough start to put together back to back performances against Sanchez and Guam High. After being outclassed by the GW Geckos, the young Dolphins team bounced back, edging out the Sharks 7-0,and beating the Panthers 10-5. 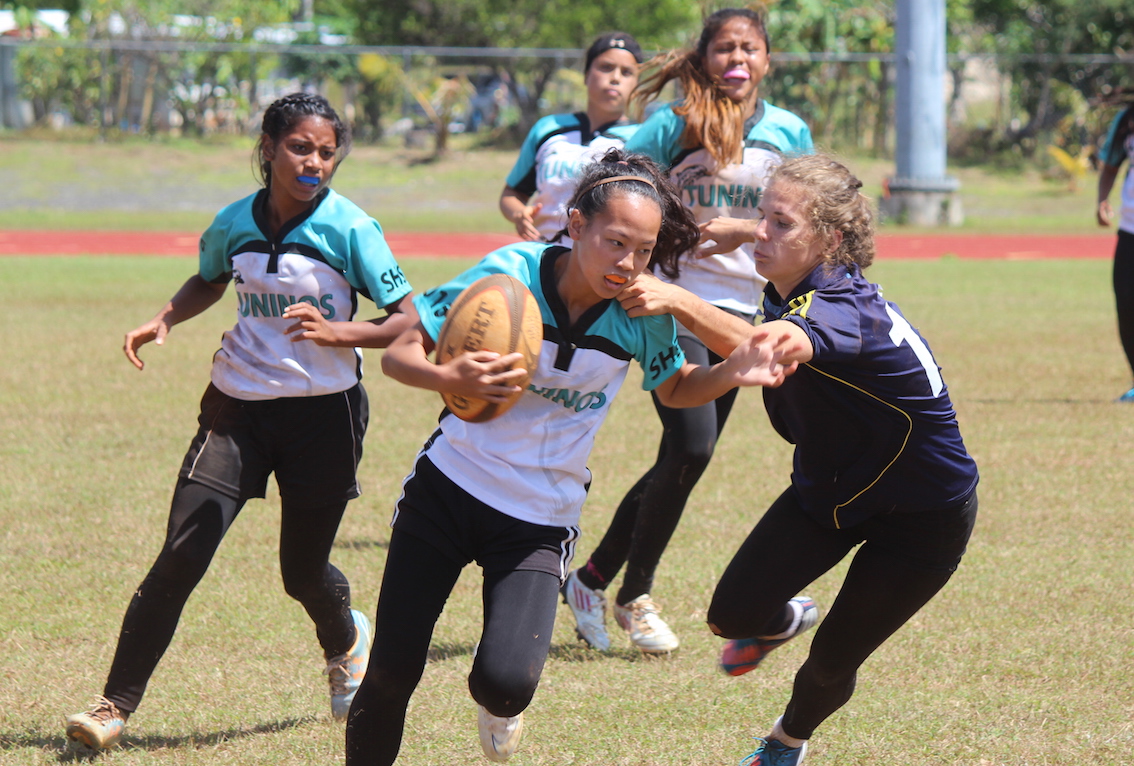 As the third week of high school rugby action resumed Saturday at Okkodo High School, the Southern Dolphins recovered from a tough start to put together back to back performances against Sanchez and Guam High. After being outclassed by the GW Geckos, the young Dolphins team bounced back, edging out the Sharks 7-0,and beating the Panthers 10-5.

Southern started their day against the defending champion Geckos and were clearly outmatched. While GW appeared to be executing flawlessly, the Dolphins struggled their way through the contest, with a couple of injuries in addition to the wet conditions.

As Southern faced Sanchez later that morning, things looked smoother as they found some dynamic playmaking from Coleen Naden on their first possession. From there the Dolphins’ stubborn defense kept the Sharks attack at bay, giving them a chance to win.

From a penalty a bit of indecision by the Dolphins’ scrumhalf led to a loose ball; Naden proceeded to clean up the ball and race in for the try, as well as kicking her own conversion. The lone score would prove enough for the victory, as the Dolphins finished the game keeping their opponents scoreless.

In their final match of the day against the Panthers, the Dolphins were firing their shots from the opening kickoff, as Breani San Nicolas caught the ball and proceeded to blaze through the defensive line en route a 40 meter run. From there, a penalty against Guam High gave Rayann Cruz enough time and space to race in for the first score. As the game continued, Southern’s defense continued to keep the Panthers from making any big plays, finishing the game on top, with a final score of 10-5.

Naden, explained after her big day that due to school commitments (and injuries), the Dolphins were missing quite a few of their returnees. “We needed them… we were missing a lot of players,” Naden said. Naden was also proud of her young team’s performance, explaining that the younger players came out nervous, but that they found their rhythm throughout the day, and finished on a high note.

Due to the absence of several players, Southern coach Adrianna Cruz-Aguon made the decision to give her swing players, who would normally play in junior varsity, the opportunity to test themselves against the higher caliber of competition in the senior division. “Our JV and varsity practice together, so I told them there’s not much difference, “ Cruz-Aguon explained. She would go on to mention her satisfaction with the team’s performance on the day.

Finishing out the day with a 2-1 record, the Dolphins still find themselves in the middle of the pack, but the hungry mentality on display by coach and player give signs of hope for this year. “For this season… the teams that beat us, we just want to come back stronger, “ said Naden.

In sevens rugby, the best teams and players understand that anything can happen on any given day, so the Dolphins’ mentality to improve and come out firing is one that could see them make a run once playoffs start. At full strength, spectators can expect a hard-fought battle with the Dolphins, and judging by the performance of their swing players, that could continue for a couple of years.