PANTHER’S BENCH PRESSES DOWN ON GECKOS 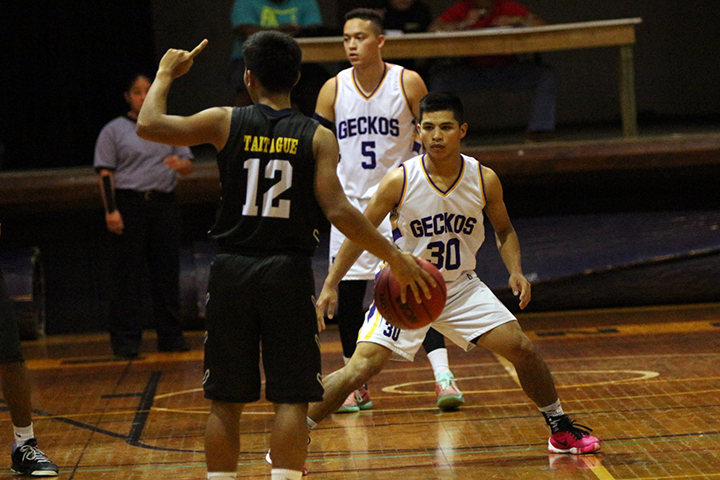 The Panthers received a big helping off the bench with the second unit putting up 28 points, led by Wendy’s Player of the Game Tyler George’s game high 14 points.

George had been on the short end of the rotations in the pre-season and early season games, but his strong play of late has given the Panthers another scoring threat while getting production on the boards.

“It’s amazing since starting off the season by not getting much playing time and then finally coming out and showing what I’m made of tonight adjacent GW,” said George in the interview with Lujan after the game.

Guam High got a balanced scoring effort from the entire team with five players getting into double-figure scoring. Russell Corpening had 11 and teammates Jujuan King, DJ Williams, and Robert Kranz scored 10 points each.

Gecko sophomore sensation Nathaniel Kyle Gaitan had a strong 26-point performance, but his scoring output wasn’t enough to get his team out of the offensive rut. Gaitan scored all 13 of the teams points in the 3rd quarter alone to get as close as 45-35, but an offensive put-back from George in the closing minutes helped the Panthers close out the quarter on a 7-2 run.

GW only converted on two field goals in the final period with 10 of their 15 points coming off free throws. Despite having key defensive players Williams and King fouled out, the Panthers double-digit lead proved insurmountable with the Geckos struggling on the offensive end.

When asked if there was anything surprising of the games outcome Panther assistant coach Ben Leon Guerrero stated, “This is what we’re gearing up for. We are still far from where we want to be, but we’re going to take this win and enjoy it tonight and tomorrow get back to the grind because we still have along season ahead,” said coach Leon Guerrero.

Wendy’s Player of the Game, Tyler George of the Guam High Panthers. (photo by Daniel Paran)

George’s first bucket came early in the 2nd quarter off a corner three-pointer to give his team a 16-14 lead after trailing through the first eight minutes. George then knocked down another three just minutes later for a 19-14 lead that ignited the game-changing Panther run.

A handful of missed layups and turnovers in the 2nd quarter allowed the Panthers get in their fast break setting where they grabbed a 37-20 lead on a Corpening jumper. GW closed the quarter on a 7-0 run, but still found themselves down 41-27 at the half.

Gaitan erupted for 13 points in the 3rd quarter, though his efforts weren’t enough to cut the lead to single digits. George knocked down two more threes in the 4th to close out the Geckos while sealing the teams seventh straight win.

Guam High improves to (10-3) on the season while GW falls to (8-5) in a tough Taga Division with the Panthers avenging their early season loss to GW.

“That loss was a heartbreaker and we wanted revenge. We practiced for this day in and day out, trying to break their zone and do anything possible to score the points and we got that done tonight,” said George.

It was the Billy ‘The Kid’ Belger show at the Okkodo gym on Tuesday night. Belger was hot from behind the arc, sinking seven 3-pointers to help the Islanders end their two game skid with a 71-55 victory over the Bulldogs. The Islanders led early and never looked back, Chris Conner and Aljurrell Grape continued their consistent play by scoring 11 and 20 points, respectively. Belger netted 28 points to lead all scorers.

The Islanders solidified their chances for getting a first round bye and home court advantage with the victory. Aiden Ferrera led the Bulldogs with 18 points, Liann Torres and Athan Arizanga each contributed eight points for Okkodo.

The St John’s Knights won a huge 55-46 away game victory against the Harvest Eagles. Harvest led from the tip off with forward JD Lim coming up big for the Eagles scoring a game high 15 points. The Knights slowly chipped away at the Eagle lead behind solid outside shooting from Gavin Moore and Takumi ‘Curry’ Simon.

The Knights took their first lead of the game after guard Michael Min made a lay-in with less than three minutes remaining in regulation. The Eagles committed three consecutive turnovers in the final two minutes of regulation and watched the Knights make 7-8 free throws to seal the comeback victory. Mark Temerowski had eight points, 14 rebounds and two blocks for the Eagles. Moore led the Knights with 15 points, Simon scored 12.