The final four teams are set for the GSPN preseason boys high school basketball tournament presented by Buddy’s Home Furnishing. The Guam High Panthers and the Okkodo Bulldogs got quarterfinal victories over the St. John’s Knights and the FD Friars. 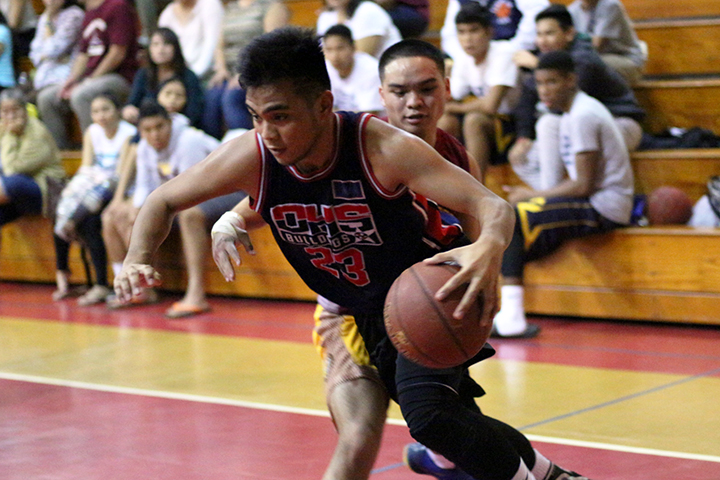 And then there were four.

The final four teams are set for the GSPN Pre-Season Boys High School Basketball Tournament presented by Buddy’s Home Furnishings. The Guam High Panthers and the Okkodo Bulldogs extended their tournament life for at least another day after each team got quarterfinal victories over the St. John’s Knights and the FD Friars.

There are no undefeated teams in the pre-season tournament and every team has an outright shot at winning the championship.

Taitague hit a three-pointer and a mid-range jumper to pull ahead 8-1 in the 1st quarter. The Knights stormed back to trail 21-19 in the 2nd quarter behind Takumi ‘Curry’ Simon’s hot shooting, but Guam High quickly revolted.

The Panthers gathered themselves and went on a 10-2 run to close out the first half. Taitague started the run with another three-pointer followed by buckets from DJ Williams and Tyler George to take a 31-21 lead at the break.

The tournament leading scorer Michael Min from the Knights started to get hot on offense in the third period but his scoring was countered by Juan King Jr. from the Panthers. King Jr. scored on isolation plays and offensive rebounds to put his team up 46-35 after three quarters.

King’s older brother Jujuan helped the Panthers preserve their lead in the final period with his slashing drives and offensive rebounding to secure the 54-44 victory.

Williams had 9 points and 6 rebounds and center Robert Kranz contributed 7 points and 8 rebounds for the Panthers who will take on the defending pre-season champion GW Geckos. The King brothers each scored 7 points in the balanced scoring attack despite limited playing time due to foul trouble.

Robert Kranz takes a shot from the inside over Knights’ Ricky Brown. (photo by Daniel Paran)

The Okkodo Bulldogs used a big fourth quarter to eliminate the FD Friars 51-39 in the tournament’s quarterfinal night cap.

It was a back-and-fourth chess match between coach Desmond Mandell III (Okkodo) and Eddie Pelkey (FD) with neither team able to make that huge run in the first half to pull away. The Bulldogs held a 24-23 lead at halftime with guard Austin Blaz scoring on a coast-to-coast lay-in before the buzzer.

The Bulldogs made a run in the third quarter with power forward Aiden Ferrera scoring in the paint twice to go ahead 33-25. Pelkey called a timeout to regroup the offense and the Friars answered to cut the lead to a single point.

Tomas Calvo hit a long jumper, Leon Shimizu hit a runner in the lane and John Fegurgur converted a fast break lay-in off a beautiful pass from Devin Sudo to put the Friars back in the game going into the final quarter.

The Bulldogs came to play in the final period and the Friars did not. Nate Lorenzo converted on acrobatic drives and Vern Gustillo played quarterback for the Bulldogs to go ahead 39-31.

The hustle points went to the Bulldogs as they out-rebounded the Friars in the final period to push the lead to double digits. Shannon Enriquez scored from an offensive rebound and made two free throws to help the Bulldogs pull away late in the final quarter.

The Friars shot a dismal 28.8 percent from the field, making 15 of 52 shots. Josh Paulino led the Friars with 8 points and 3 assists. Jeno Aquino and Isaiah Sablan each scored 7 points for the Friars.

Aiden Ferrera fires off a three point attempt beyond the arc. (photo by Daniel Paran)

Ferrera had a double-double for the Bulldogs, playing just 3 quarters with 12 points and 13 rebounds. Lorenzo had 9 points, 8 rebounds and 2 assists for the Bulldogs who will face the top-seed JFK Islanders at 7:05 pm.

Panthers’ Jujuan King struggles to get a shot up as the Knights’ swarm him. (photo by Daniel Paran)

Rodney Taitague shoots a pass to a teammate on the outside. (photo by Daniel Paran)

Ricky Brown looks for an open man on the inside to pass. (photo by Daniel Paran)

Gavin Moore with the jumper to score two for the Knights. (photo by Daniel Paran)

RJ Rokop tries to slip by Bulldogs’ Lian Torres as he approaches from the side. (photo by Daniel Paran)

Leon Shimizu sinks a basket for three for the Friars. (photo by Daniel Paran)

Friars’ David Sakazaki dumps a pass to Leon Shimizu on the inside. (photo by Daniel Paran)