SILVER RAIDERS BACK IN BFL FINALS

The Silver Raiders are headed back to the BFL Finals after cruising through the Island Chiefs 30-0 in the semifinals Friday night. Friday’s game was played at the Hal Shiroma Football field, the first game all season under the bright lights. 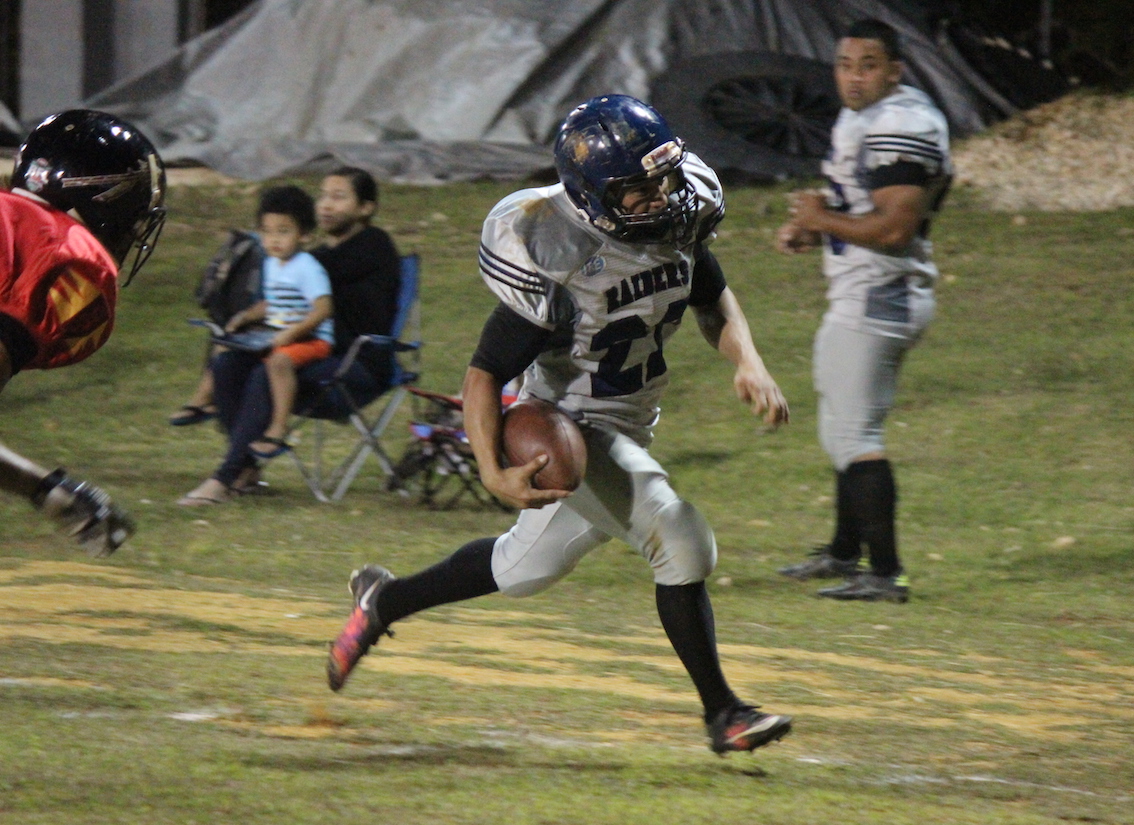 The Silver Raiders are headed back to the BFL Finals after cruising through the Island Chiefs 30-0 in the semifinals Friday night. Friday’s game was played at the Hal Shiroma Football field, the first game all season under the bright lights.

Birthday boy Jesse ‘Pumpy’ Manglona scored two touchdowns in the win with the Raider offense pacing a touchdown per quarter. For Manglona, helping his team win was the priority, even on his day.

“There’s some games that I can’t make because of work so showing up today was very important to me, regardless if it was my birthday. We got the win so it was well worth playing,” said Manglona.

But what about the birthday celebration?

Manglona’s biggest score came in the 3rd quarter with the Silver Raiders nursing a 15-0 lead. ‘Pumpy’ bounced outside left on a handoff, then shifted gears and switched fields while burning the Chief defenders in the process for the 44-yard score.

The Raiders went up 22-0 after the touchdown, but they appeared in complete control throughout. Manglona’s first score came in the 1st quarter off a 24-yard run where he also bounced out to the left side, but had beat the defense and didn’t need to run a sideline-to-sideline.

Raiders quarterback Danny Manibusan connected with Jacob Torres in the 2nd quarter from 14 yards out to take the 15-0 lead with Anselmo Untalan scoring the 2-point conversion on an end-around run.

The Raiders’ final strike was in the 4th quarter as Manibusan tried a quarterback keeper up the middle of the chiefs defense form seven yards out. After a few seconds of pushing but gaining no yards, Manibusan pitched the ball to a wide-open Hank ‘The Tank’ Sablan, who skated up the left side of the field for the games final score.

It was a rough outing for the Chiefs offense with quarterback Leeray Zapatos struggling to find a rhythm with his receivers. Multiple plays ended in confusion on deep-ball routes and short patterns that made it tough for the Chiefs to get into scoring position.

Birthday boy Jesse ‘Pumpy’ Manglona earned the Wendy’s Player of the Game after scoring two touchdowns on the evening. (photo by Robert Balajadia)

The Chiefs defense came closest to a score in the 2nd quarter with cornerback Steven Flores jumping a passing route of Manibusan near the line of scrimmage. Flores had green ahead of him and was just missing the ball as he let the near pick-six slip out of his fingers. The Chiefs were down 15-0 in need of a big play.

It’s back to the finals for the Raiders who are already the two-time defending BFL champions. They will face the winner of the Angels and Eagles Saturday night, but their preparation for the big game won’t change.

“We’re going to treat it like any other game and prepare the way we always do. We’ll most likely come out to watch the game tomorrow, but no matter who we face, we’re not going to take our foots off the gas pedal. We’re going to come into the championship game full-throttle and try and bring it home for the 3rd year in a row,” said ‘Pumpy’.

Saturday’s game between the #2 Angels and #3 Eagles is set to kick-off at 7 pm also at the Hal Shiroma Field.