ALYSSA PALOMO CONTINUES TO LEVEL UP IN GYMNASTICS

At just 10-years-old, level 7 gymnast Alyssa Palomo has accomplished plenty competing in Vancouver Washington. Since training gymnastics at 20 months old, Palomo’s dedication and love for the sport are always on full display. 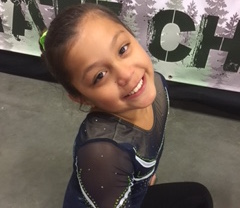 It was clear since being a toddler that 10-year-old Alyssa Jade Palomo had a future in gymnastics. Parents Michael and Sheila had a feeling that their active toddler, who would find ways to climb out of her crib and over tables and counters, had a higher calling.

At just 20 months old, they decided to enrol Alyssa at the Naydenov Gym in Vancouver Washington as part of the Parent and Tot class. Then, they quickly saw the progression.

She would earn 8th place overall at her last meet before moving to a new in October of 2016 called Southern Washington Gymnastics Academy (SWAG), under head coach and owner Paul Rawlings and coach Riss Rodriguez, a OSU Alumni Gymnast.

The routines, flips and spins that Alyssa goes through is the easy part of the competition; getting over the nerves is the real challenge.

“I get so anxious at the beginning of each competition, but I push through and just go for it! I feel good about myself after I complete my routine,” said Alyssa.

Striving to get better

The now 10-year-old Alyssa puts in more time training than ever before, hitting the floor five hours a day Monday-Friday as a level 7 gymnast, working hard as if it were her part-time job.

“Gymnastics is just fun!,” explained Alyssa on why she enjoys the sport so much. “I like seeing my friends and teammates because they are like my second family to me.”

Alyssa has a wealth of character, which explains exactly why her favorite event is the floor routine.

“I like to show my personality with the music and choreography, but my favorite move is the round off, back hand spring, back tuck.”

Palomo has a passion for gymnastics as her parents say she enjoys rock climbing, swimming and also playing soccer.

Alyssa just recently wrapped up an intensive gymnastics training camp at Oregon State University under award winning gymnast Risa Perez. Palomo is determined to use the knowledge she’s gained, coupled with hard work, to further herself in the sport of gymnastics all the while representing Guam.