The race for the 2017 boys basketball title got four teams smaller Friday evening with the leagues brass all advancing to the semifinals round. 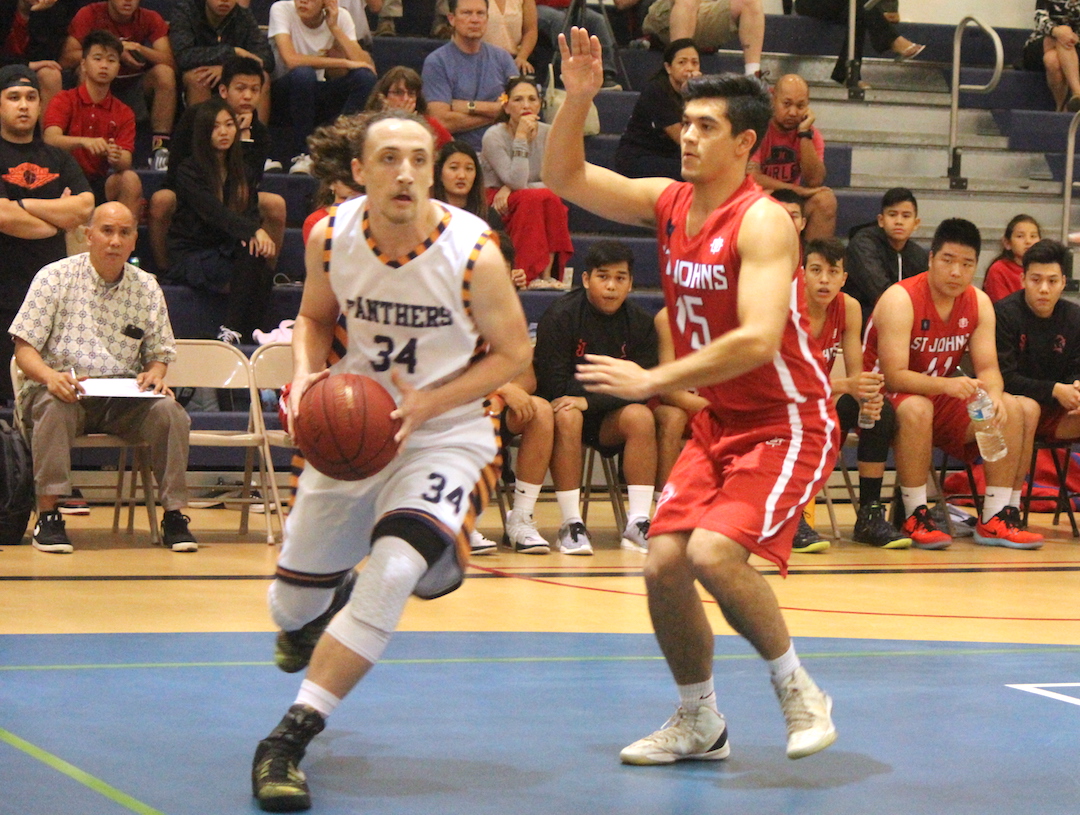 The race for the 2017 boys basketball title got four teams smaller Friday evening with the leagues brass all advancing to the semifinals round.

The closest contest in the quarterfinals was between the Guam High Panthers and St. John’s Knights where the home team Panthers knocked off the title hopeful Knights 57-46. Panther Juan King had a team-high 18 points while teammate Khalid Volious posted a monster double-double, scoring 13 points while pulling in 22 rebounds.

“The Knights are such a great team,” said King before answering how they managed to close each quarter strong. “We just stay focused and composed. We tried to not make many mistakes and that allowed us to play how we usually play.”

Guam High held off a big night from Knights Michael Min, who poured in a game-high 34 points, the only Knight to reach double-digits. Sharpshooter Takumi Simon had Panther DJ Williams tied to the hip, struggling to get good looks and swingman Tony Hsieh suffered a knee injury early in the second half that forced periodic trips to the bench.

The Knights battled back from 15-7 to get within 15-14 early in the second quarter. The Panthers closed out the 2nd strong that included a Williams three and buckets from Volious to go into the half up 24-16. A spurt from Min helped the Knights carve into the lead in the 3rd period, coming as close as 26-23, but the Panthers yet again pulled away with King leading the charge, taking a 37-31 lead after three with Simon nailing a half-court heave at the buzzer.

“It was really our coaches. They see what’s going wrong better than we do so we just try and adapt the what they were telling us,” said King on how the Panthers managed to close each quarter strong.

Min kept the Knights in the ballgame every quarter, though they were never able to capture a lead. Min was heating up in the final period, primed for a takeover after knocking down a corner three-pointer just 40 seconds into the quarter to get within 39-36.

King then went on a personal run, netting a pair of free throws and a trey from the wing to put the Panthers back up 44-38. Off a missed Knights three, King drove up the middle of the Knights defense where he zipped a pass to a wide open Volious for a 46-38 advantage, forcing a Knights timeout.

Late in the period, Min stayed aggressive on his rack attack where he would cash in two layups, one with a foul plus a free-throw, to keep the Knights close 48-43.

St. John’s then went to hack-a-Volious at the 1:05 mark where the big man sometimes struggles from the free throw line. After a few words of wisdom from his teammates, Volious locked eyes with the ball and simply uttered, “I got it.”

“My teammates kept telling me ‘Make the crowd quiet by hitting these free throws,’ and I just told them I’ve got it. I’m glad [my teammates] talking to me helped motivate me to get those shots in,” said Volious.

Volious sank both freebies to put the Panthers up 50-43.

It wasn’t just Volious, but the Panther unit went 7-of-8 from the free throw line in the final minute, putting an end to the Knights 2017 title run.

Guam High will now face the undefeated St. Paul Warriors next Tuesday for a chance at a championship spot. King and the boys are well aware what’s at stake and are expecting a fun, but competitive game.