St Paul Warriors made history yesterday winning their first ever IIAAG Boys Middle School Volleyball championship. The Warriors went a perfect 10-0 for the season, making it official Thursday night with a (25-12, 25-18) straight set victory over the McCool Seahawks. 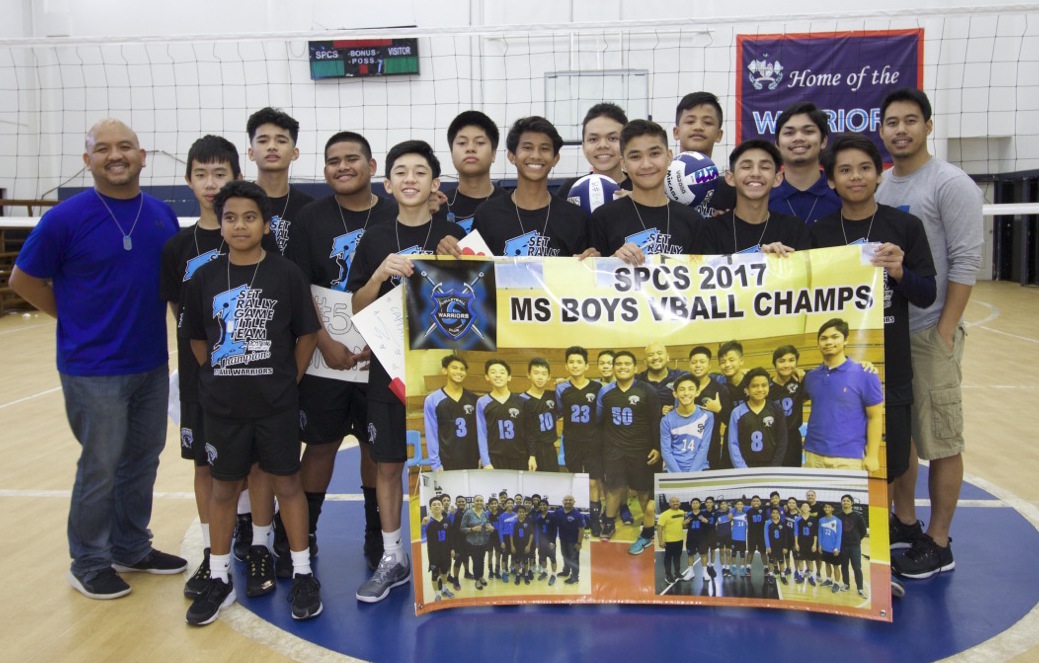 St Paul Warriors made history yesterday winning their first ever IIAAG Boys Middle School Volleyball championship. The Warriors went a perfect 10-0 for the season, making it official Thursday night with a (25-12, 25-18) straight set victory over the McCool Seahawks.

Mcgrady ‘Big Mack’ Dois had six kills and eight aces to lead the Warriors in their final game of the season. “Feels good to win it for St Paul, this is my first year to attend school here. The team had so much on the court, we had good communication for the whole season,” said Dois.

The Warriors were heavily favored to win the contest but the visiting McCool Seahawks did their best time make it a competitive game. The Warriors led 9-4 to open up the first set, but the Seahawks had consecutive kills by Travon Jacobs to trim the lead to 9-6.

The Warriors regrouped and went on an offensive tear with setter Jonathan Sevilla finding Dois for kills as they quickly went ahead by double digits. St Paul closed out the game winning 25-12 with Elijah Garrido, Keith Nauta and Nolan Tretasco recording insurance kills for the win.

McCool opens the second set with 3-0 lead with Evan Brown at the service line. The run was halted by a kill from Garrido to put the Warriors on the board. Zeriah Blas from St Paul followed with another kill to tie the contest. The Warriors later went ahead 13-5 with ‘Big Mack’ at the service line, serving eight aces in a row to give the Warriors a comfortable lead.

The Seahawks capitalized on hitting and service errors to stay within striking distance. Jacobs had highlight kills in the second set as McCool trailed by seven points. The Warriors regrouped and went on a 4-0 run to claim victory with Nauta and Sevilla recording kills to claim the match and the championship.

The Warriors were led by head coach Al Garrido, who is also Elijah’s father. “It’s was a really special season for us,” said Elijah Garrido who transferred from St Anthony. “I thought it would be hard to adjust here at first but my teammates helped and it was easy for me to fit in with them”. Garrido’s former school (St. Anthony) posed the only challenge to the Warriors, taking them to a three set game early in the season. Aside the close three game match with St Anthony, the Warriors won every game in straight sets. Garrido, an eighth grader, had five kills for the Warriors.

The high flying Sevilla acted as setter and outside hitter during the match against McCool. He recorded five big kills for the Warriors and was proud his team won the championship. “It’s really special to be on a team that won the first middle school Volleyball championship for St Paul. We are all happy our hard work paid off,” said Sevilla. Sevilla gave credit to his teammates and coaches for their success. “Coach (Al Garrido) taught me how to become a great setter and how to work with my team,” said Sevilla. Nauta chipped in three kills for the new champions. Jacobs led the Seahawks with five kills.

The hard work does not stop for the Warriors, they will look to defend their IIAAG middle school basketball championship next month. Look for new additions ‘Big Mack’ and Garrido to play a big role for the Warriors.