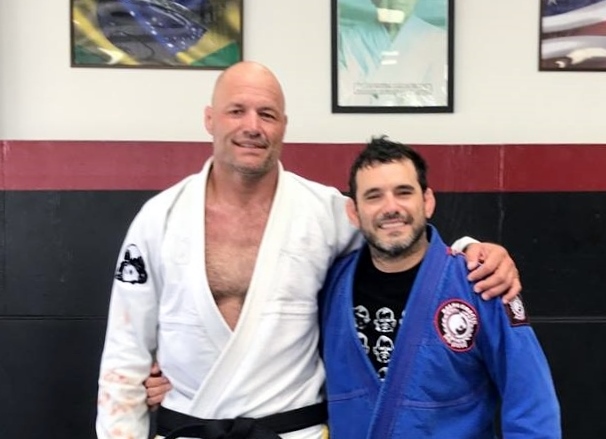 The moment Ken Carpenter received his black belt from Eduardo Fraga at the Ralph Gracie Academy in Berkeley. (courtesy photo)

Former USA Olympic cyclist Ken Shimizu Carpenter road his way through the belt levels of jiu-jitsu, putting in the grind for over eight years before finally being rewarded with his black belt over the weekend at the Ralph Gracie Academy in Berkeley, CA.

“I did not expect it,” Carpenter said from his California home. “It was surprising and overwhelming at the same time. It’s a big honor.”

At the young age of 52, the 1988 and 1992 USA Olympian looks back at his jiu-jitsu career and fondly remembers the humble beginnings.

“I had a friend that was into it and I was getting burnt out riding my bike, so I started with a friend who was a collegiate wrestler. We did some privates (with Fraga). My friend was 40 pounds lighter than me and he used to kick my (butt).”

That was the hook at 44-years-old.

Carpenter represented the USA in sprint cycling at the 1988 Seoul Games and 1992 Barcelona Games. He was also the 1987 Pan American Games gold medalist. (courtesy photo)

“Cycling takes more hours and less intensity and you’re competing by stop watch. I was physically better than most of my counterparts in the U.S. In jiu-jitsu, you can be super strong physically, but technically if you’re not there, it’s not gonna happen. I was able to rely on my physical abilities (in cycling). With jiu-jitsu, it’s a wider playing field and people have different styles and technique. You have to accept that on a given day, your’e going to lose.

“In cycling, the expectation was for me to win always. In jiu-jitsu, I still want to win, but each day is a competition. You have to think and have good technique, be involved and in the moment. If you’re not, you’re going to get beat.”

A sentimental time with grandma Ruth Shimizu prior to her passing a few years ago. (courtesy photo)

Carpenter comes back to visit his Shimizu family and friends every so often. His last visit was during the 2016 Marianas Open.