Anthony Castro led the Sanchez Sharks comeback over the Guam High Panthers with a 27-point outing in a battle between two of the IIAAG boys basketball leagues top teams. 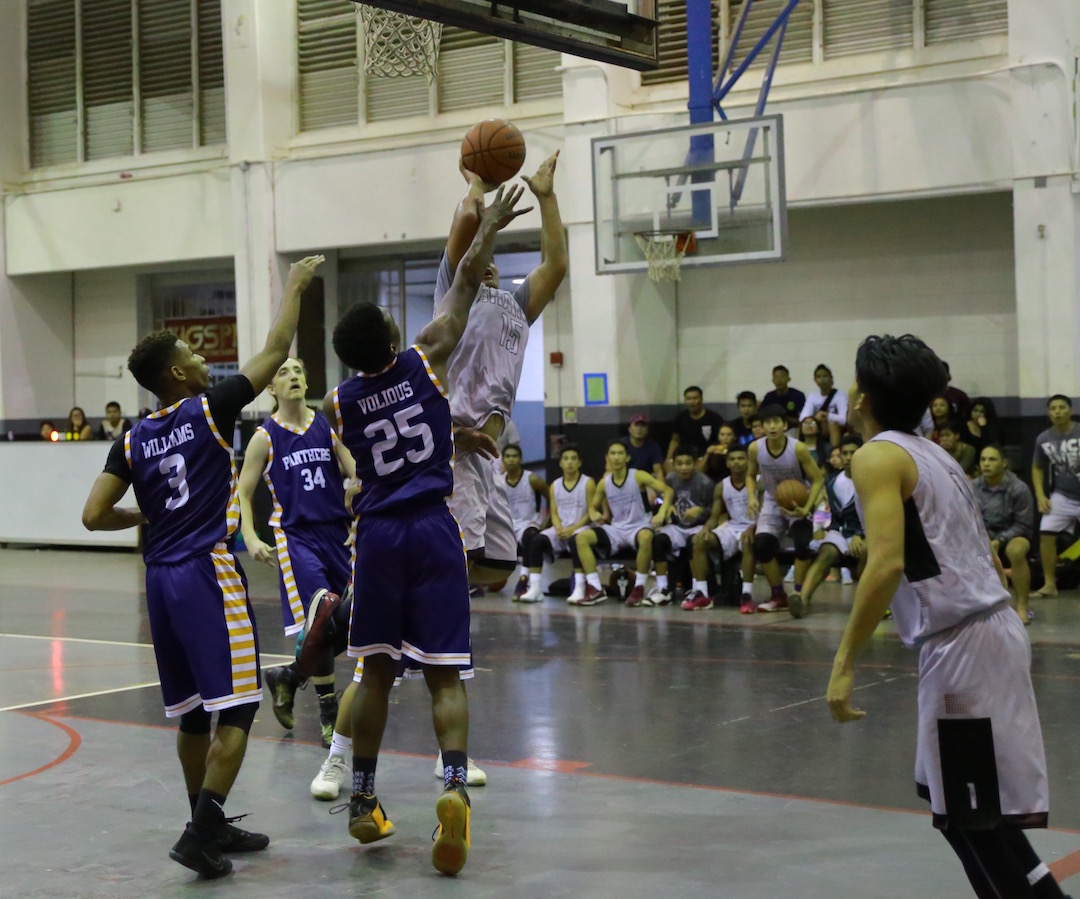 A battle between two of the top three teams in the IIAAG boys basketball league put on an exciting show Friday night as the 2nd place Sanchez Sharks stormed back from a double-digit deficit to defeat the visiting Guam High Panthers 54-49.

Shark Anthony Castro saw that his team needed a spark on offense as they faced a double-digit deficit late in the first half. Castro decided to flip the offensive switch, ending the night with a game-high 27-point performance with the Sharks capturing their first lead in the final period.

“Once I started hitting free throws the rim started to get bigger so I kept shooting more and it was falling for me tonight,” said Castro on the big night.

Castro and teammate John Obra converted on two layups giving Sanchez a 42-41 lead at the 5:15 mark. Robert Kranz gave the Panthers the lead back on a drive to the basket, 43-42, but Castro calmly nailed a hoop plus the harm to go up 45-43.

Sanchez deployed a speedy half court trap defense which forced the Panthers to costly turnovers, translating to clock-killing possessions from the Sharks.

Panther Juan King took an inbound pass at half court where he knifed through four members of the Sharks on his way to the basket. King’s layup attempt fell short while picking up his 5th foul just moments later, ending the night on a team-high 22 points.

The Panther offense went empty from the three-point line in the closing seconds, giving the Sharks a big comeback victory.

“We turned it up on the defensive end which helped us force key turnovers,” said Sharks head coach Jin Han on the win. “[Castro] really caught fire which got the team going. We lost some big players last year, but these guys have been coached by me for over three years so they know what I want from them and the whole team has stepped up.”

Guam High held a 23-9 lead with 1:50 seconds to go in the second quarter. Forward DJ Williams got hit with a technical foul where Sanchez got a point from the line, which started the Sharks run.

Castro hit a three-pointer from the right wing to get within 23-13, and scored another bucket to get within 25-15. With three seconds left in the first half, Chris Yerten launched a prayer from mid-court that found its way in the net, sending the Sanchez crowd into a frenzy while cutting the double-digit lead of the Panthers to just 25-18.

“[Yerten’s] shot really sparked us going into the second half, but our main focus was to get the ball out of Juan’s hands. By taking the ball away from him we tried to force the other players to make the plays. I hope this win serves as a momentum builder heading into the playoffs,” added Castro.