It took seven innings, three rain delays, and stellar defense for the Academy Cougars to defeat the previously unbeaten JFK Islanders 5-3 in a thrilling battle Saturday morning at the Tai Field. 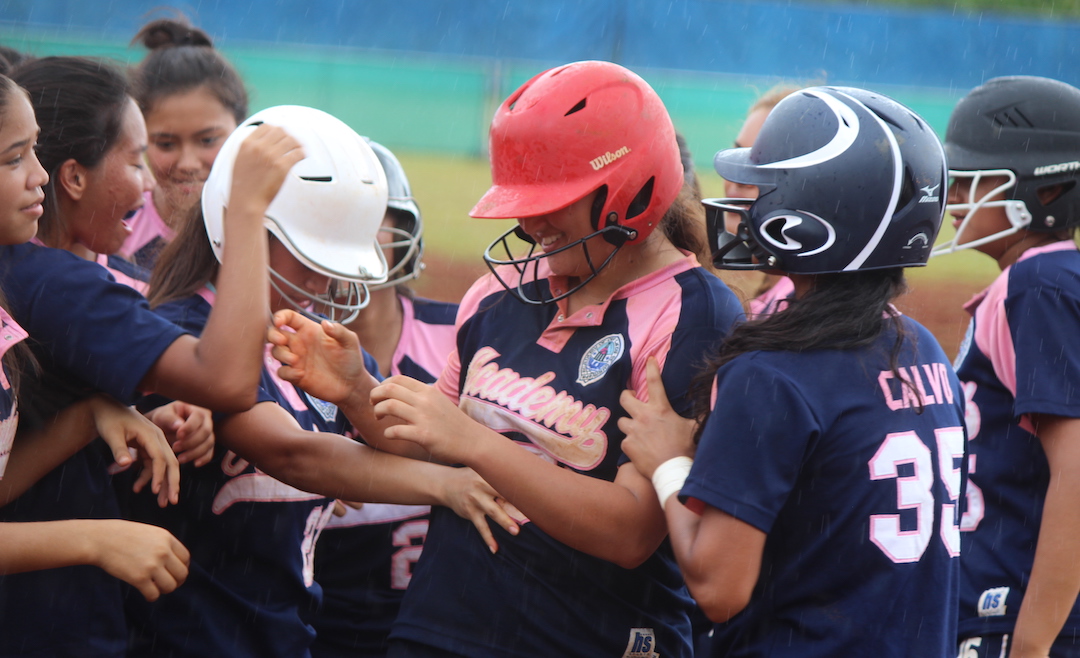 It took seven innings, three rain delays, and stellar defense for the Academy Cougars to defeat the previously unbeaten JFK Islanders 5-3 in a thrilling battle Saturday morning at the Tai Field.

Both squads put their ace pitchers at the mound with JFK’s Pillar George and Academy’s Ashley Mendiola going all innings. JFK falls to (4-1) while the Cougars jump to (5-1).

Cougar Juliana Nelson unloaded a two-run homer in the bottom of the 6th inning to give the Cougars a 5-2 advantage after neither team was able to develop consistent offense early on.

JFK calmly approached the top of the 7th inning knowing it was three runs or ball game. Islander Emani Gutierrez started with a lead single which caused the Cougars to implode, just for a brief moment. A pass ball and an errant throw to third base allowed Gutierrez to run home to get within 5-3 while putting a runner in scoring position.

With a runner at second and the game tying run at first base a batter later, JFK’s George stepped up to the plate. George was facing a 2-2 count when she let loose on a low pitch, popping the ball high in field. The in field fly was not caught, which spurred the second base runner to sprint home where she was eventually tagged for the out.

The game was then called on a double play after the ‘infield fly rule’ was implemented, stating a fly ball that is still in field is officially called out regardless if caught or not.

Many Islander fans where puzzled at the rule, making a case that the play should’ve ended on the fly ball alone, negating the eventual tag on the runner going home.

The JFK girls were up to bat first. Only a run was scored in the top half of the first. The run came off of an RBI single from Olivia Iriarte, which gave Pillar George, who previously hit a double and stole third base, the scoring opportunity, making the score 1-0.

When it was the Cougars turn at bat, they also only scored one run. The run came off an in the park home run, hit by Dorian Calvo. This solo run tied up the game at 1-1.

There was not any offensive action until the bottom of the third. Kiana Rivera hit an RBI triple, letting Rhia Pangindian take home plate after being walked and stealing two bases. The score at the end of the third inning was 2-1, a Cougar lead.

The Islanders only hit a single in the top of the fourth, pitcher Ashley Mendola giving no mercy.

The leading Cougars got one more run in the bottom of the fourth. This time it was scored when Kristiana Cruz hit an RBI, which gave Juliana Nelson a scoring opportunity. This made the score 3-1, Cougars with a nice lead.

In the top of the fifth, the Islanders scored one run from another RBI from Emani Gutierrez, allowing Gabby Bengko to score the run. This narrowed the score to 3-2.

The Islanders did not allow a single hit in the bottom of the fifth.

The final two Cougar runs of the game came from an incredible double home run hit by Juliana Nelson, which allowed Doriaun Calvo and herself to score, making the score 5-2.

The seventh inning, JFK scored one run, the run came from Emani Gutierrez who hit an RBI which gave Jaeda Aguon the run. Pillar George hit a deep ball when she was up to bat, but it led to a double play, erasing the scoring opportunity.

“The weather had no effect on the way we played, JFK always plays very competitively, but we executed. We have grit and we really showed that today,” said Academy Head Coach.