The Academy Cougars secured first place in the Gadao division of the IIAAG Girls Basketball League after defeating the Notre Dame Royals 63-43 at ND. 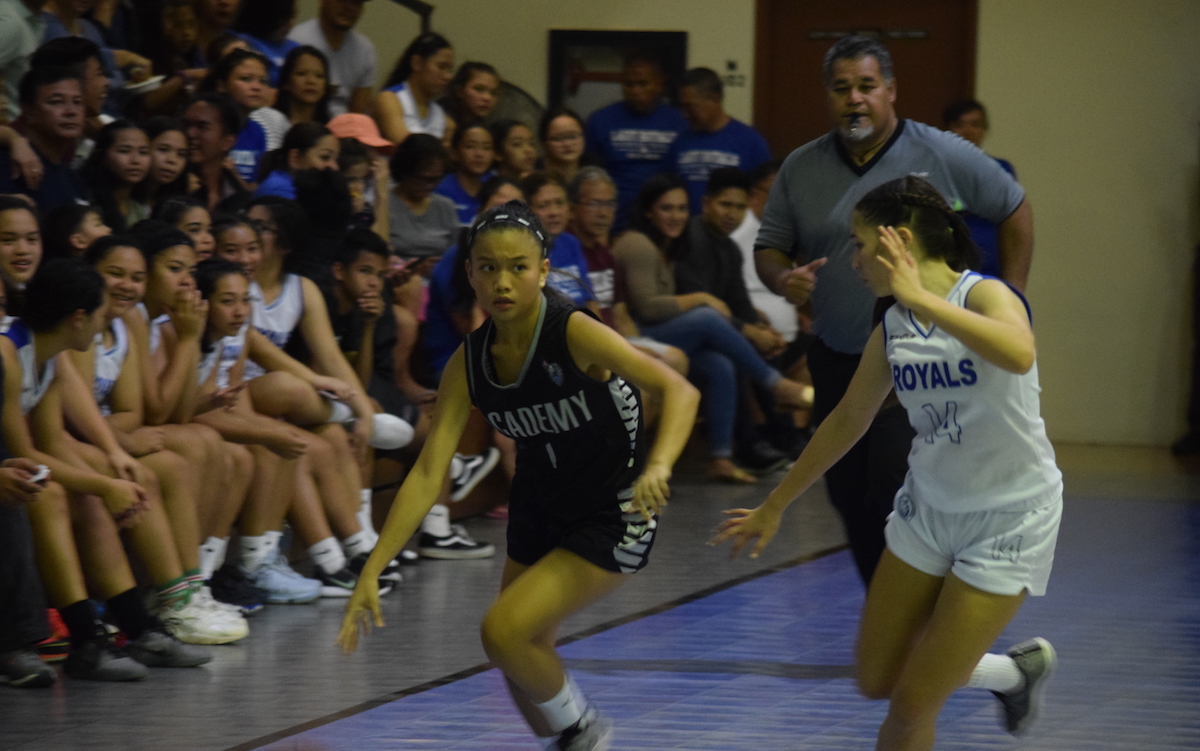 The Academy Cougars secured first place in the Gadao division of the IIAAG Girls Basketball League after defeating the Notre Dame Royals 63-43 at ND. The Cougars improve to 13-1, suffering their only defeat to the St. Paul Warriors (13-1).

After the Royals blew out the Warriors last week, the Cougars came into their hostile home court with a good game plan and the right mentality.

“We weren’t thinking of that. We weren’t focused on other teams; we were more focused on ourselves,” said power forward Meaghan Cruz.

Cruz along with center Mia San Nicolas combined for 41 points and 32 rebounds. The Cougars utilized their size advantage and scored a bulk of their points in the paint with San Nicolas and Cruz going to work inside. The Cougars out-rebounded the Royals 46-20.

San Nicolas and Rosita Duenas gave the Cougars an early advantage, capturing a 10-3 lead. Duenas scored a basket and dished a pair of assists to make an early statement to the home team.

San Nicolas and Cruz, aka the “Twin Towers”, continued to do damage in the paint to increase their lead to 22-13 in the second quarter.

Cougar head coach Eddie Pelkey’s halftime speech inspired his squad as they opened up the second half on fire. Academy scored 18 straight points to start the second half with the ‘Twin Towers’ doing a bulk of the scoring. ND’s man defense was not working and the isolation plays produced points in the paint for the Cougars.

ND’s Brie Leon Guerrero finally stopped the bleeding with a transition basket off a steal. The Royals finally found some confidence and began to knock down long distance shots to get within ten points. Lauren Phillips and Cedera Aguilar each drained 3-pointers to cut the deficit to 40-30 after three quarters.

San Nicolas did not allow the ND crowd to get into the game and scored the first six points in the fourth quarter to end any hopes of a comeback. San Nicolas scored on the opening set play, went coast-to-coast for a lay-in after stealing the ball at mid court and then scored off an offensive rebound to put the Cougars up comfortable in the final period.

San Nicolas made a strong push for the leagues MVP with another monster game with 29 points and 20 rebounds.  Cruz had 12 points, 11 rebounds and six blocked shots. Duenas had a good all-around performance as well with seven points, five rebounds and five steals.

“We knew we had a size advantage so we wanted to look more inside in the second half,” said San Nicolas. “There’s still some games to go before the playoffs and we look to improve with every game.”

Leon Guerrero led the Royals off the bench with 10 points, seven rebounds and five steals. Elysia Perez had 11 points and three steals. The Royals drop to 10-4 for the season but remain second place after the Okkodo Bulldogs defeated GW Geckos. The Southern Dolphins and the Geckos have identical 9-5 records to round out the top four in the Gadao division.

In the junior varsity game, the Royals had a last second game winner by Hana Takano to defeat the Cougars 36-35. The Cougars came back from an eight point deficit in the final period to take the lead but Takano’s bucket just before time expired gave the home team the victory. Takano led the Royals with 15 points.

PODCAST: THE ART OF THE CORNERMAN WITH MELCHOR MANIBUSAN
FRIARS BEAT GECKOS WITH 7th INNING RUNS