Saturday morning’s IIAAG baseball showdown between the FD Friars and home team GW Geckos saw five lead changes with the Friars getting just enough runs in the 7th inning to top the Geckos 6-5 in their second meeting this season. 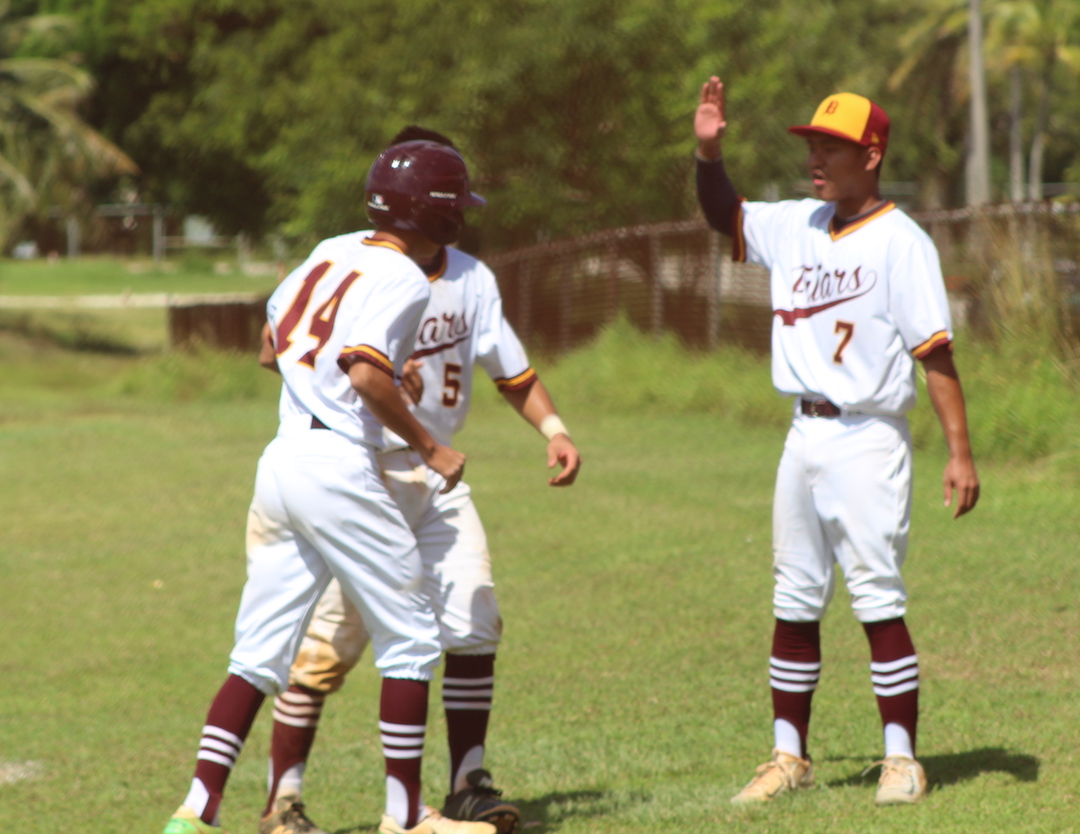 Saturday morning’s IIAAG baseball showdown between the FD Friars and home team GW Geckos saw five lead changes with the Friars getting just enough runs in the 7th inning to top the Geckos 6-5 in their second meeting this season.

In the top of the 7th inning, Friar freshman Ethan Lizama swung in teammate Cooper Paulino to tie the game at five runs and teammate Nick Charfauros brought in Lizama via RBI single to take the late lead 6-5. Paulino scored four of the Friars going 2-2 at bat with two base on balls.

Lizama was also big at the mound, claiming the win after relieving starter Arron Eclavea in the 5th inning. Taking the loss for the Geckos was Athan Yatar after relieving Joe Young in the 2nd inning.

GW’s Isiah Nauta came into the contest with three home runs through three games and the FD defense could do little to stop his personal slug fest. Nauta smashed a solo homer in the 5th inning to tie the game at three runs each.

Teammate Jarren Gumataotao then brought in Aguon a few batters later to give GW their first lead of the contest, 4-3. Friars Paulino knotted up the contest in the 6th after stealing home off a Gecko error. Gecko’s Young gave GW back the lead 5-4 with a sac fly in the bottom of the 6th to set up the wild finish.

After drawing a walk, Paulino darted straight to second base for his second steal of the game. Lizama wasted no time by getting a good lick on a fastball from Yatar to bring in an ecstatic Paulino to tie the game at five.

Charfarous then went heavy on his swing to the left outfield where he was eventually caught trying to slide into third base, but not before bringing in Lizama for the lead changing 6-5 run.

The Geckos were in the middle of their rotation in the 7th inning as Aiden Gumataotao hit a lead single to spark a rally attempt. With two outs away, Gecko Aaron Jamanila smacked a low sailing shot right around second base where Paulino made a clutch grab to end the game.

Gecko Isiah Nauta points up to the sky after rounding the bases for his solo home run. (photo by Robert Balajadia)

Friars Aaron Eclavea gets off a clean fastball. (photo by Robert Balajadia)

Gecko Athan Yatar takes over for Joe Young in the 2nd inning. (photo by Robert Balajadia)