The Sanchez Lady Sharks are the five-time defending champions of IIAAG wrestling. Saturday morning, they collected more wins on the 2017 season where they sit atop the standings while trying to bring in their sixth straight title. 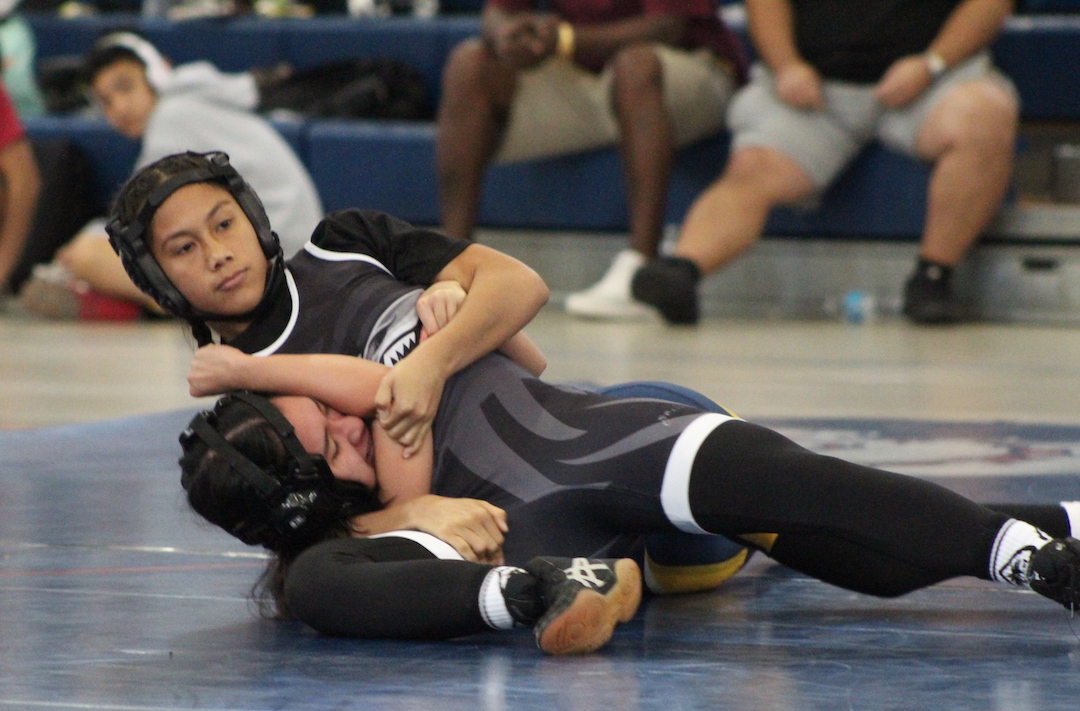 It’s about quality, not quantity. The Sanchez Sharks find themselves on the top tier of the standings in the 2017 IIAAG Wrestling League with both girls and boys teams collecting huge wins on the mat at Okkodo High School.

“We are a small team and we don’t have the numbers (in females) like JFK and Guam High but we train hard and we come into meets prepared,” said 138-pound wrestler Kaetlyn Quintanilla. The Lady Sharks are the defending champions.

Quintanilla helped the Sharks defeat the Okkodo Bulldogs girls team with a first round pin in her 138-lbs match.

“I usually wrestle in the 122 or 127 lbs divisions but i moved up to 138 lbs for this particular meet,” said Quintanilla. Sanchez defeated the Bulldogs 42-18 with four total pins in the match. Tatiana Ananich (102 lbs), Quintanilla (138 lbs), Jackie Duenas (155 lbs) and Chloe Quidachay (184 lbs) all pinned their opponents to help the Sharks chalk up another one in the win column under coach Tony Aquino.

“I believe we’ve won five championships in a row and we are going for our sixth,” said Quintanilla.

The boys looked just as impressive, dominating the Bulldogs with a 54-12 victory. Lynch Santos was impressive with a pin victory in the stacked 138-lbs division.

“The team is doing pretty good so far. Our goal is to try and get as many wins in the all-island meet,” said Santos. This year, the best regular season boys record will have the rights to host the all-island meet. The Sanchez boys team will have a very important match up next week against the defending champion FD Friars. Both teams are strong contenders for the regular season best record.

“As we continue the season, we all have room to get better. We can only improve with more practice and time,” said Santos. The Sanchez boys recorded five total pin victories against Okkodo with Santos (138 lbs), Jun Aserias (152 lbs), Paul Aguon (160 lbs), Javier Rodriquez (170 lbs), and Hansen Ignacio (285 lbs) all winning via pinfall.

The Sharks won their dual meet match later in the day against the Guam High Panthers with the girls winning 42-36 and the boys winning 41-30. The Sharks improve to 3-0.

The FD Friars split their meet against the Panthers with the Friar boys winning 52-18 and the Panther girls team defeating Academy/ND squad 36-26. The Friars remain undefeated, the Academy/ND Friars fall to 1-1.