The all-day rainy weather couldn’t stop the Guahan Varsity Football League from rolling through at the Eagles Field Saturday with a pair of teams getting big victories as the playoffs quickly approach. The Cowboys defeated the Chiefs in the morning game followed by the Eagles shutting down the Outlaws in the afternoon game. 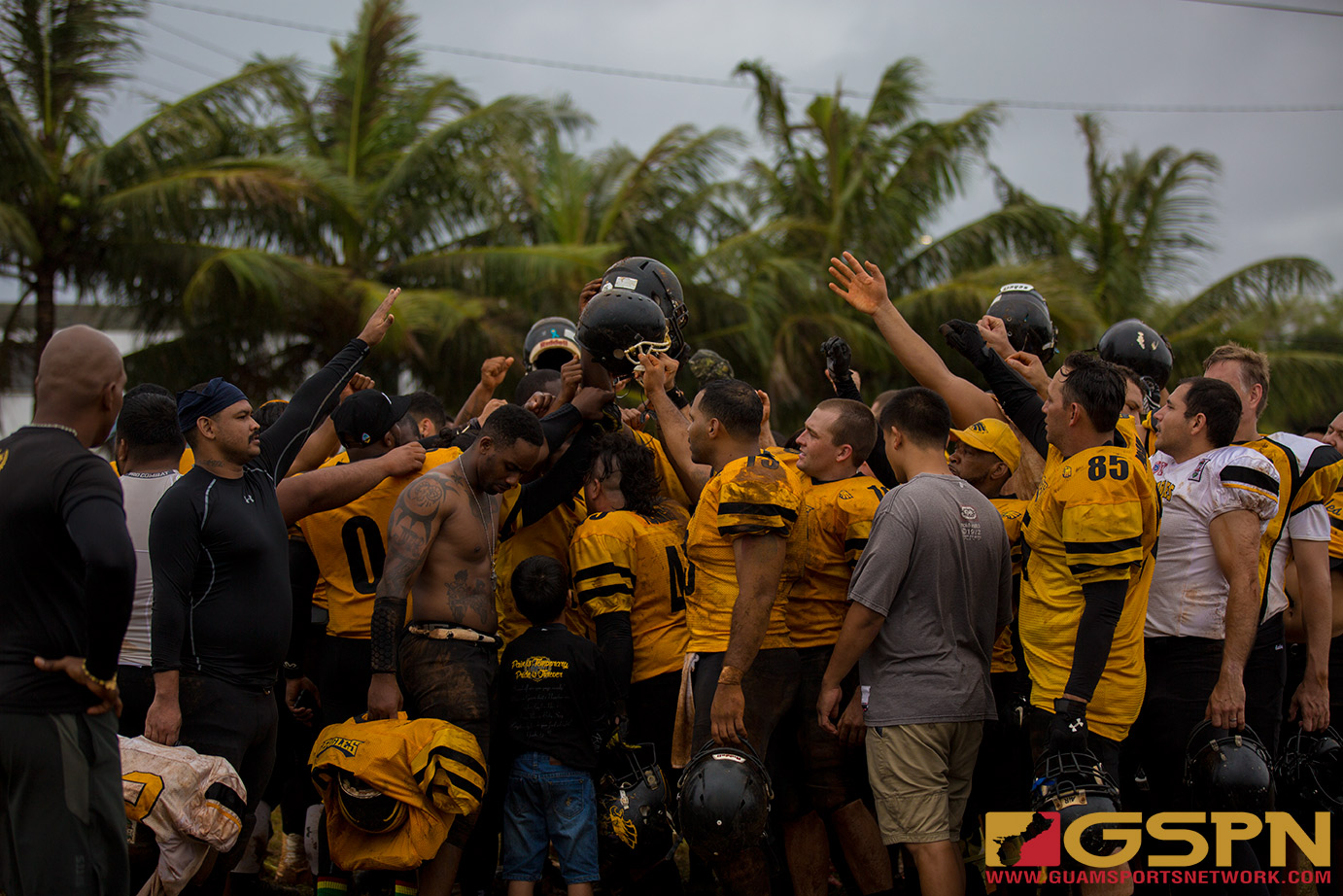 The all-day rainy weather couldn’t stop the Guahan Varsity Football League from rolling through at the Eagles Field Saturday with a pair of teams getting big victories as the playoffs quickly approach.

The Cowboys defeated the Chiefs in the morning game followed by the Eagles shutting down the Outlaws in the afternoon game.

After splitting their first two games, the Eagles played like a different team after getting quarterback Daray Davis back from injury with the big win over the Outlaws.

Davis returned from injury in a big way by throwing two touchdown passes to his favorite target Kelvy Coney in the 2nd and 3rd periods.

“I had about two days of practice to get used to the team and the different ball speed and route runners. We really couldn’t stretch the field like we wanted to because of the conditions, [Coney] and I would’ve love to go deep all the time, but instead we kept it short and sweet today,” said Davis on his connections with his receivers.

Coney’s first touchdown came from 8 yards out on a slant route up the middle and his second haul came on off a post route after splitting two Outlaw defenders.

“I had to rely on my route running because the field was wet and I couldn’t utilize my speed. It helped have [Davis] back because we have good chemistry and we read each other like a book. We both know what each other are going to do, it’s too easy,” said Coney on the scores.

Neither team was able to find any sort of offensive success in the 1st period with the game still scoreless, but the Eagles quickly changed it with a big play from linebacker Marcus Chew up the middle. Outlaw quarterback Travis Meno was looking for a short dump off, but Chew read the play and jumped the route which turned into a 30-yard pick-six to give the Eagles their first lead 6-0.

Outlaw defensive back Joel ‘The Great One’ Limtiaco was looking to respond on the defensive end as he nearly came away with two interceptions on the following defensive series. The Eagles calmly continued to stick with the passing game as Coney managed to get on the inside of Limitaco for the game’s first offensive score.

The Eagles held 12-0 halftime lead after missing both PAT’s.

Sticking with what was working, the Eagles passing game flew down field to open the second half as Davis once again found Coney in the back of the end zone for a 19-0 lead before the Eagles started to empty their sidelines.

Action continues in the GVFL next weekend Cowboys and Outlaws set to face off at 11 am while the Chiefs and Raiders will mix it up at 2 pm.