The FD Friars moved in to the 2nd seed after dispatching the Sanchez Sharks 52-35 at the FD Phoenix Center Tuesday evening. Stingy first half defense and a halting run in the final period catapulted the Friars while swingman Nathaniel Kyle Gaitan was one steal away from a triple double. 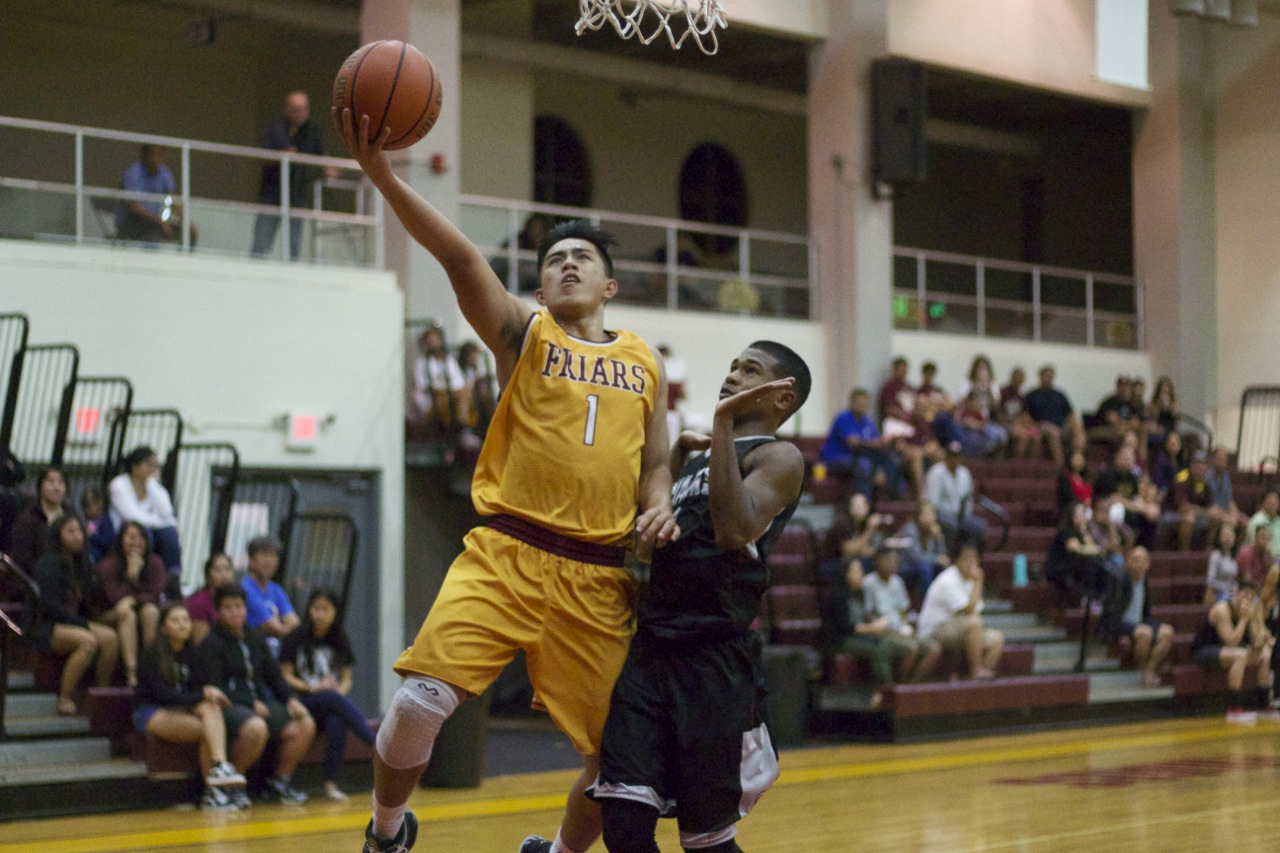 The FD Friars moved in to the 2nd seed after dispatching the Sanchez Sharks 52-35 at the FD Phoenix Center Tuesday evening. Stingy first half defense and a halting run in the final period catapulted the Friars while swingman Nathaniel Kyle Gaitan was one steal away from a triple double.

“Capturing 2nd seed is huge right now. We want to get the home court advantage for the playoffs because our fans here play a big role and they help get the team up,” said Gaitan.

The Sharks have proven to be a second-half team this season and Tuesday night played right into their season stereotype after trailing the Friars 30-16 at the half. Shark carved the double-digit lead to get as close as 40-32 with six minutes left in the final period, but the Friars were prepared.

“We knew they comeback against Guam High and we really didn’t want that to happen to us. When they got close, we just flipped the offensive switch and ran the plays coach wanted us to correctly. The Sharks are a very patient team and we focused on pressing them to make it difficult for them to control the ball,” said Friar Tomas Calvo.

Castro nailed a three-pointer from the right wing just one minute into the quarter to ignite the Sharks comeback. On the next possession, Sanchez guard RJay Saburo poked free a loose ball and converted a layup to get within 40-32.

Saburo then got slapped with a technical foul on the defensive end after a disagreement with an official on an out-of-bounds possession, giving FD two free throws to rebuild the double-digit lead.

Gaitan then went on a personal run of his own, netting two buckets off steals he forced to permanently shift momentum back in favor of the Friars.

“They started to give us more respect, a little more room, so we definitely had to take advantage of that. We played a little sloppy at the end, but we were able to get our offense going,” added Gaitan on the win.

The Sharks scored the first four points of the game in the first minute of the 1st quarter. The Friars stayed aggressive drawing 7 fouls in the opening period, reaching the double bonus just minutes into the 2nd period.

Friar De’Aundre Cruz scored big buckets in the 2nd period with FD taking a 23-6 lead with four minutes left to play in the first half. Castro converted on a deep ball and added points at the line to keep the Sharks alive, facing the 30-16 halftime deficit.

Castro came out aggressive in the 3rd by opening the half on back-to-back layups to get within 37-22. John Obra added to the Sharks 9-2 run with a layup with Sanchez knocking on the door trailing 37-26 through three periods.

Castro hit a three pointer to open the final period, but FD got a big score from sophomore Jose Taimanglo answering Castro’s trey to lead 40-29. A free throw and layup by Saburo would be the closest the Sharks would get to the comeback before the Friar defense held the Sharks to just three points in the final three minutes.