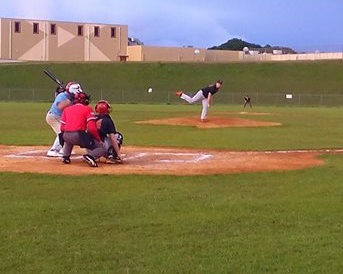 The Chiefs would put four runs on the board in the first inning and five more runs in the second inning and starting pitcher Ryan Coleman did the rest limiting the Rays to just one hit over six innings.

Coleman would run into some trouble in the 7th inning as the Rays would rally for two runs. But it was too little too late as Coleman would get the final out on strike three looking, earning the Chiefs a spot in the Aloha Maid Amateurs Upper Division Championship Game.

Athan Yatar went six strong innings with five strikeouts out of the bullpen after relieving starter Gerry Paulino in the second inning. The Rays pick up their first loss of the playoffs and play the #3 AutoSpot Canyons in the loser’s bracket semifinal with the winner getting another shot at the undefeated Sumay Chiefs in the Championship Game.

The Chiefs continue a improbably run coming into the playoffs with a 1-6 record and seven seeding out of eight teams. But the Chiefs have clicked at the right time rolling off wins agains #2 Agat Cardinals, #3 AutoSpot Canyons and #1 Rays. “Just getting hot at the right time, playing good defense and getting good pitching,” says Chief’s RJ Escalona.

In other action the AutoSpot Canyons moved on to take on the Rays in the semifinal with a 6-2 win over the Chalan Pago Amigos. Canyon’s starting pitcher Freddy Cepeda picked up Aloha Maid Player of the Game with three strikeouts and just two hits allowed over seven innings.

Canyon’s Ryan Martinez was 2 for 3 with two runs and Mike Bautista was 3 for 4 with a run and RBI. Florencio Binuya was 1 for 3 with a double for the Chalan Pago Amigos who pick up their second loss of the playoffs to finish in 4th place and another great season.

For schedules, scores and to follow the Aloha Maid Fall Amateur Playoffs live go to the league page Facebook/AmateurBaseball Guam.