FRIARS CARRY ON TO SEMIFINALS

The FD Friars defeated the Southern Dolphins 36-6 in Friday evening’s opening round of the IIAAG Football Playoffs at the Hal’s Angels field. 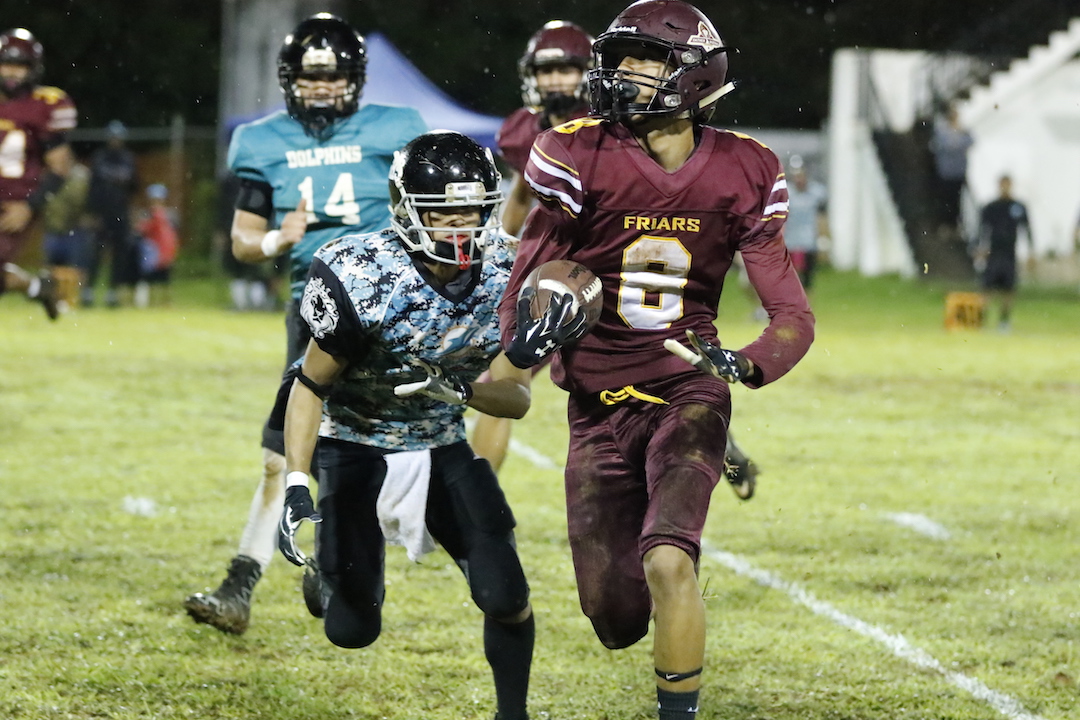 The FD Friars defeated the Southern Dolphins 36-6 in Friday evening’s opening round of the IIAAG Football Playoffs at the Hal’s Angels field.

FD quickly pulled away to a 22-0 after just four offensive plays, barring a speedy game that reached halftime in under 45 minutes. Southern did manage to score a touchdown on the final play of the game against the young Friar unit as linebacker Dylan Parke scooped up a fumble and returned it for 68 yards to avoid the shutout.

Friar running back Kein Artero totalled 109 yards and a touchdown to lead the offense as the feature back with De’Aundre Cruz sitting out of action nursing an injury. League Offensive MVP Xavier Naputi had a light work load, playing just the 1st quarter where he grabbed a 10-yard touchdown from quarterback Daniel Phillips.

The Friar defensive line had a big night with seven total sacks, three of which coming from Wendy’s Players of the Game Rylan Napoleon and Austin Peredo. Peredo nearly came away with a 78-yard fumble return touchdown in the 3rd quarter, but was caught at the three-yard line to prevent the score.

Fullback Kai Akimoto, Javian Cruz and Izzic Cabrera supplied the other Friar touchdowns as they coasted to a 29-0 halftime lead.

FD will face the JFK Islanders next weekend in the semifinals as JFK circled the wagon, scoring 36 unanswered points against the Sanchez Sharks in their 36-20 win.

Friar Javian Cruz gets good yardage on a big run in the second half. (photo by Vince Delgado)

Dolphin Jared Gomez breaks through the line for a 1st down. (photo by Vince Delgado)