The JFK Islanders stamped their ticket to the semi-finals of the IIAAG Football League playoffs after scoring 36 straight points to defeat the Simon Sanchez Sharks 36-20 last night at the Guam High Field. 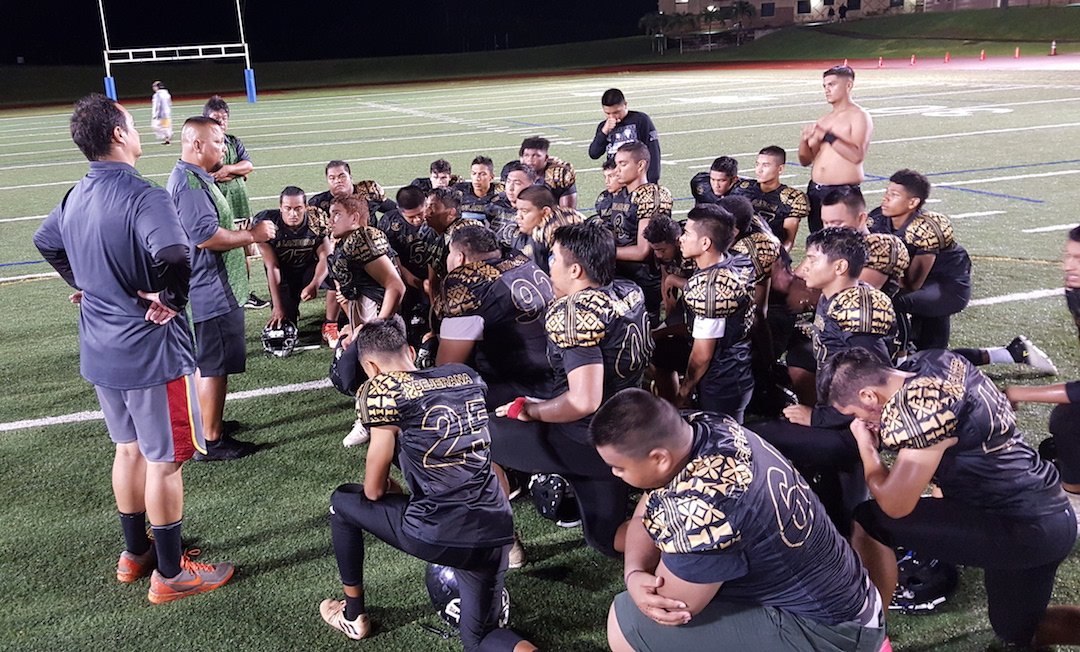 The JFK Islanders stamped their ticket to the semi-finals of the IIAAG Football League playoffs after scoring 36 straight points to defeat the Simon Sanchez Sharks 36-20 last night at the Guam High Field. It seemed like the Sharks were heading for a blowout win after going up 20-0 in the second quarter until the Islanders finally woke up.

“We just remained positive after trailing 20-0. As a leader on the team, I just tried to pump every one up and told them to keep on pushing,” said quarterback Allen Blend II.

Blend connected with wide receiver Juan Sarmiento with one second left before halftime for a 46-yard touchdown to trail just 20-8 at halftime.

The Islander offense was unable to move the chains in the first half but got their prayers were answered after Blend threw up a ‘Hail Mary’ caught by a streaking Sarmiento in between a pair of Shark defenders. The play gave the Islanders a boast of confidence entering the second half.

“We didn’t put our head down. We knew we had another half to play,” said Sarmiento.

Wendy’s Players of the Game Chase Spotanski and Juan Sarmiento

The Sharks forced a turnover on the opening kickoff with Sarmiento fumbling (recovered by Ossie Ngirameked). The Sharks capitalized on the turnover and later scored with Jeremiah Sablan breaking tackles for a 30-yard run down the left side. The two point conversion failed as the Sharks led 6-0 after the first quarter.

The Islanders looked to counter but were unable to move the chains with the JFK receivers dropping catchable passes. Sanchez contained the JFK run game with linebacker Kameo Toves anchoring the defense for the Sharks recording five early tackles; two of which were behind the line of scrimmage.

Toves continued to make big plays on defense in the second quarter, this time picking off Blend in JFK territory. The Sharks made use of the good field position and scored off a 14-yard run from Joshua Sablan. Sablan also ran in the two point conversion to increase the Shark lead to 14-0.

The Islanders looked to put up quick points with six minutes left in the second quarter with Blend going to the air once again. Blend found Sarmiento on a slant pass but he was met by four Shark defenders who picked at the ball to force a fumble. The Sharks’ Nicolas Foster picked up the stripped ball and dashed 30 yards for the touchdown. Sarmiento later redeemed himself with the touchdown from Blend to trail just 20-8 at the break.

The Sharks received the kickoff to start the second half but were unable to move the chains and punted after facing a 4th down situation in their own territory. The Islanders got good field position with a 30 yard punt return from Sarmiento as they entered Shark territory. Three plays later, JFK found the end zone with Blend connecting to tight end Jonah Hahn for a 28-yard touchdown to cut the deficit to 20-14 after an unsuccessful two-point conversion run from Deante Delgado.

The Shark offense managed a first down Sablan gaining yardage on the ground in the third period. After moving the chains, the Sharks were unable to advance into JFK territory and were forced to punt. JFK’s Sarmiento made another big play on the punt return and shook off two tackles to tie the contest at 20-20 with a 39-yard return.

Momentum was clearly in favor of the Islanders and they got another break with a fumble recovered by JFK’s Steven Flores. The Islander offense played with high confidence with Blend finding receiver Aiden Quitugua open on the left side for a 29-yard touchdown to take their first lead of the contest. After a failed pass attempt at a two-point conversion, the Islanders led 26-20 going into the final period.

The Islander defense prevented the Sharks from crossing the 50-yard line in the fourth quarter with IIAAG MVP Chase Spotanski recording two tackles and linebacker Lawrence Tisalona forcing and recovering a fumble to give possession back to JFK.

Blend looks to add to their lead and looks for Hahn in the end zone but his pass is intercepted by defensive back Ngirameked.  The Sharks needed a big play to tie the game and moved the chains with Kamerin Toves picking up a 25-yard gain to enter JFK territory. The Sharks were unable to advance the ball any further and were forced to punt.

JFK secured the win several plays later with Spotanski scoring from the 1-yard line to increase their lead to 34-20 after a successful two-point conversion from Delgado. JFK milked the clock to advance to the semi-finals; they will meet the FD Friars next week in a semi-final showdown.

“We are up to the challenge next round vs. FD. We just have to continue working hard,” said Spotanski. Spotanski had the touchdown and also recorded a team high eight tackles for JFK. Tisalona had seven tackles and two fumble recoveries for the Islanders.

Jeremiah Sablan led the Sharks with 73 rushing yards on 14 carries, he also scored a touchdown. Kamerin Toves had 64 rush yards, Joshua Sablan had 27 yards on the ground with a TD. Kameo Toves recorded a game high nine tackles and an interception. Jake Uncangco had five tackles for the Sharks; two were tackles behind the line of scrimmage. Ngirameked had two tackles, a fumble recovery and an INT for the Sharks.

Blend threw three touchdowns to three different receivers. He completed 10 passes for 150 total yards and threw two interceptions. “It shows our team has a lot of weapons on offense and we are not tied down to one key player,” said Blend. Sarmiento had three receptions for 60 yards, two touchdowns and two fumbles. Hahn had three receptions for 37 yards and a touchdown. Delgado was the leading rusher for JFK with 60 yards on the ground on nine carries; Justin Camacho rushed for 51 yards on six carries.