The undefeated Friars celebrated their homecoming with a big victory over the Sanchez Sharks on a warm Saturday afternoon at the UOG Field. The high-flying Friars defeated the Sharks 52-0 with quarterback Daniel Phillips hitting receiver Xavier Naputi for four touchdowns in just the first half. 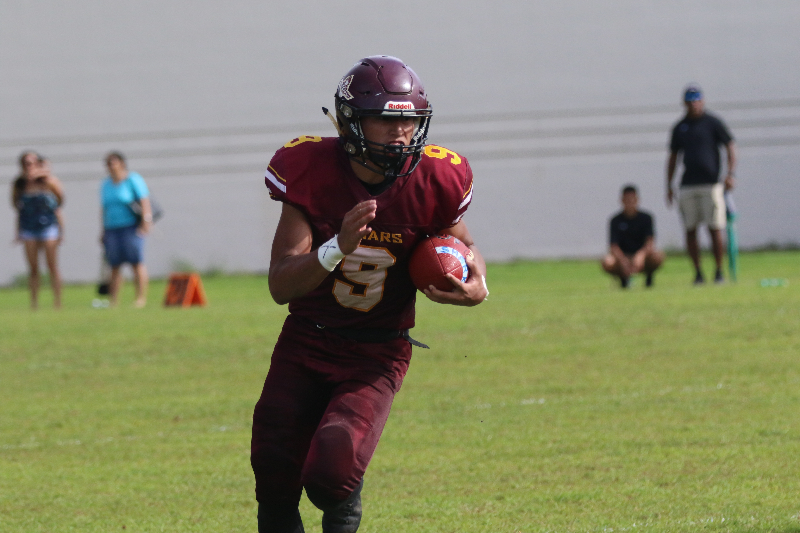 The undefeated Friars celebrated their homecoming with a big victory over the Sanchez Sharks on a warm Saturday afternoon at the UOG Field. The high-flying Friars defeated the Sharks 52-0 with quarterback Daniel Phillips hitting receiver Xavier Naputi for four touchdowns in just the first half.

The Friars came onto the field and released a barrage of touchdowns, scoring seven total.

Naputi registered four receiving touchdowns, one of which came after he pulled off a very impressive fake punt and ran downfield for 25 yards midway through the 1st quarter. Two plays later, he was in the endzone after he caught a 29-yard pass from the Friars quarterback, Daniel Phillips.

Naputi ended the game with four catches and four touchdowns for 70 yards.

Naputi also had two punt return touchdowns that were waved off due to illegal blocking.

Friar running back De’Aundre Cruz scored a very impressive touchdown when he ran 40 yards, breaking through three tackles to further the score 35-0 in just the second period.

When the half ended, the score was already a staggering 42-0 with Phillips and Naputi connecting for one final time.

Wendy’s Players of the Game Xavier Naputi and Daniel Phillips.

In the first quarter, the Friars scored within a matter of what seemed like seconds when Xavier Naputi caught a 29-yard ball passed to him by Phillips, making the score an early 7-0. Shortly after this, Naputi scored his second touchdown in a row after a fake punt run. This increased the score to 14-0, a dominant lead midway through the first quarter.

The Sharks had possession of the ball, but fumbled it. This fumble was recovered by defensive lineman Orion Perez. This eventually led to a two yard touchdown run from De’Aundre Cruz, which made the score 21-0 heading into the second quarter.

After the start of  the start of quarter two, the Friars kicked off due to the previous touchdown. The Sharks return man muffed the ball and FD retained possession. Right after that play, Naputi caught a five yard touchdown pass, expanding the game to 28-0.

A few moments later, the ball was back in the hands of Friar De’Aundre Cruz for a 40-yard touchdown run. This showed the crowd another score, 35-0.

Right before halftime, Naputi made his fourth touchdown off of a 25-yard pass.

Only one more touchdown was scored in the game after halftime. This lone touchdown was made by young freshman running back Javian Cruz, who made the score 49-0 right before the start of the fourth quarter.

A field goal was kicked by Giancario Abril a few minutes before the end of the game. Abril also converted all seven PAT’s.

The Friar defense collapse on the Sharks for no gain. (photo courtesy of Vince Delgado)

The Friars tear through their homecoming banner. (photo courtesy of Vince Delgado)

Xavier Naputi reels in the touchdown catch despite the coverage. (photo courtesy of Vince Delgado)