Despite having three penalties erase three touchdowns, the Tiyan Titans kept the home team Southern Dolphins winless Saturday morning in a 19-0 shutout. This was Tiyan’s third straight win and third straight shutout with the defense closing the contest on a pick-six in the 4th. 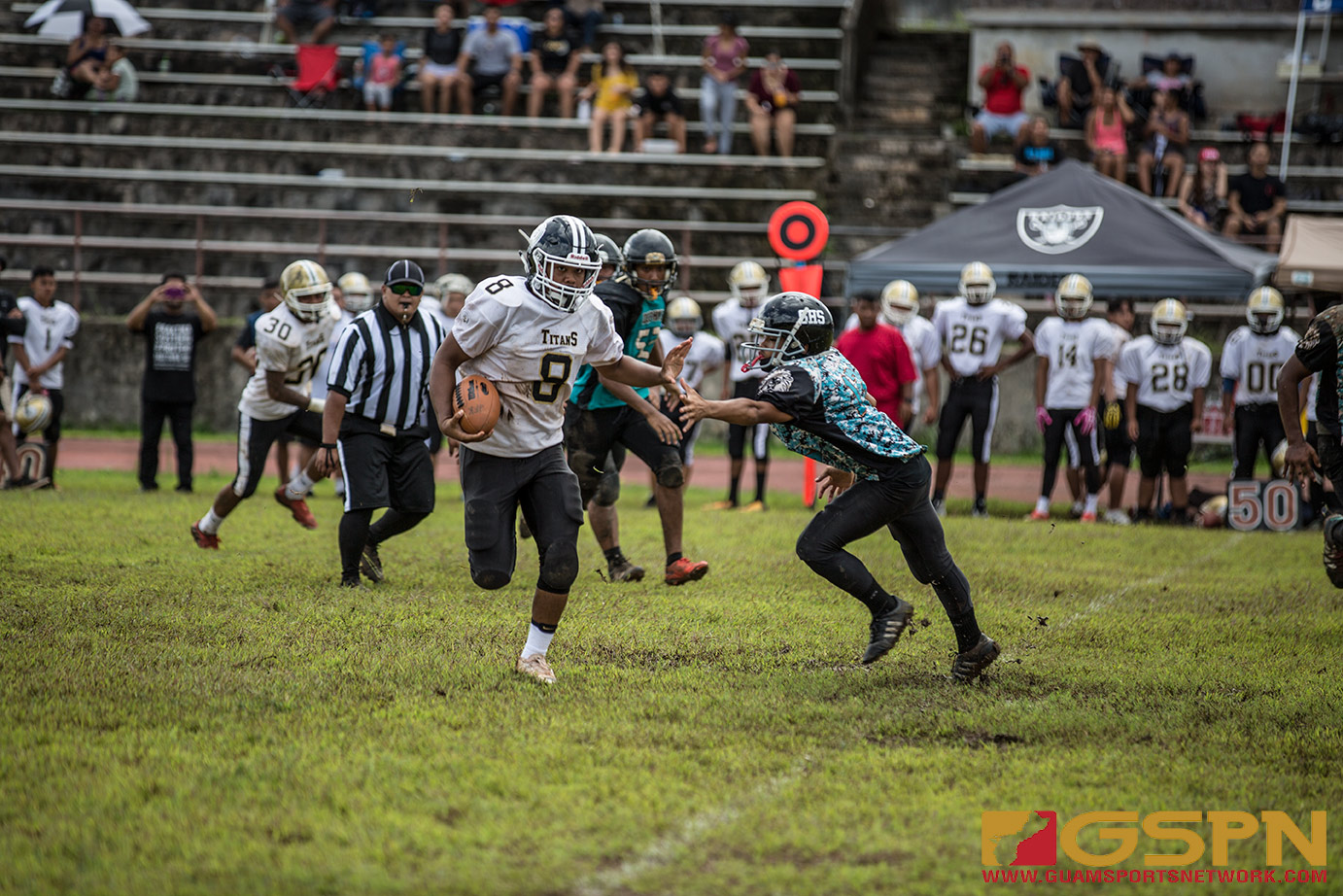 Despite having three penalties erase three touchdowns, the Tiyan Titans kept the home team Southern Dolphins winless Saturday morning in a 19-0 shutout. This was Tiyan’s third straight win and third straight shutout with the defense closing the contest on a pick-six in the 4th.

Titan quarterback Kobe Quiambao gave Tiyan a much needed lift to break a scoreless game on the last play of the first half on 4th down. Quiambao was forced out of the pocket at his own 43 and broke through the Dolphin front seven. He shifted gears to the right side of the field where he outran the entire secondary for a 57-yard score to go up 7-0.

“It was a big confidence booster for my team. We got our heads down after that 1st quarter, but we started to score after halftime which played big in the ‘W’,” said Quiambao.

Kobe was nursing a foot injury after the game, but assured he’d be ready for game time against the Sharks next week Friday.

Running back Fred Lumogda punched in the teams second score from 14 yards in the 3rd period and cornerback Mark Laanan sealed the game with a 30-yard pick-six score to final the Dolphins 19-0.

Titan head coach Danny Cepeda was hot all contest which eventually led to his late-game ejection. Cepeda stayed vigilant that his runner had broken the plane for a touchdown instead of the initial call of him being just short. Words were thrown in the direction of the line judge as he picked up his second unsportsmanlike conduct penalty forcing his ejection.

Despite not having Cepeda on the sidelines as the Titans host the Sanchez Sharks next weekend, offensive coordinator Joey Guerrero and a healthy coaching staff will ensure the Titans continue to perform at a high level.

“We have coaches in place who will be there Friday. Coach Milo and coach Chew handle the defense and I run the offense. Coach Danny oversees the whole operation, but there will be no effect to us all,” said Guerrero on the situation of Cepeda’s ejection. “Hat’s off to Southern for a good performance today.”

Wendy’s Players of the Game Kobe Quiambao and Mark Laanan.

The Titans forced a three-and-out on the Dolphins first drive and return man Laanan took the punt 70 yards to the house for the games first potential score. A block in the back negated the would be touchdown.

The second Tiyan touchdown to be wiped off the board was a 26-yard touch pass from Quiambao to receiver Nico Velez, negated due to holding in the 2nd quarter.

Tiyan’s final no-score was a short pass from Quiambao to Tyler Pangelinan, who maneuvered his way into the end zone from the Dolphin 35, riding the right sideline. An illegal blocking penalty left Pangelinan’s score off the board.

“We didn’t let those penalties get to us. We overcame it and worked it out as a team,” said Laanan on the unfortunate calls.

The win marks another milestone for the Titans as they have already turned 2017 into their most historic year yet.

“Making history every week is something we should be proud of. Me, Kobe and running back Javier Lujan have been a part of the team since the beginning,” Laanan continued.