The Okkodo Bulldogs and Guam High Panthers faced off Friday night at the Bulldogs home turf. Though the game was played at Okkodo, the Panthers had a large audience cheering them on as they beat the Bulldogs 30-0. 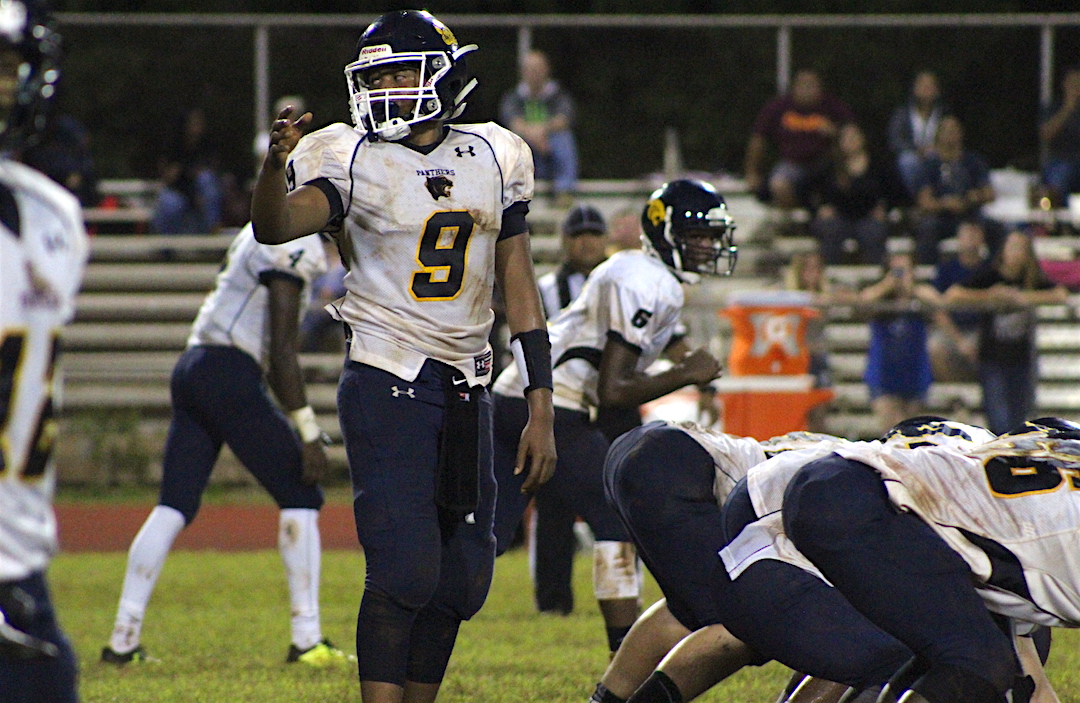 The Okkodo Bulldogs and Guam High Panthers faced off  Friday night at the Bulldogs home turf. Though the game was played at Okkodo, the Panthers had a large audience cheering them on as they beat the Bulldogs 30-0.

The Panthers entered this game a week after getting dominated 29-8 by Allen Blend and his high flying JFK Islanders. This week they did the complete opposite.

The Panther defense did their all season best, and shutout the Bulldogs due to sacks, three and outs, and an impressive interception completed by corner Chad Powell, who gave the ball to quarterback Rasean Jacobs and the Panthers Offense to set up a key score in the 2nd quarter.

The offense also paid their dues and scored a total of four touchdowns. One of these touchdowns included was scored when the ball was fumbled and recovered in the endzone by receiver William Sanders, a senior, right before halftime break. Rasean Jacobs was responsible for all three of the other touchdowns, which were scored by short quarterback keeps close to the end zone.

“I think we came out here, we wanted to win, that’s what it all came down to,” said Rasean Jacobs, quarterback, “We wanted to win more than them, so we were focused.”

In the first quarter of the ballgame, the Panthers defense showed up right away, forcing Okkodo to punt in their first offensive drive after getting negative yardage. GHS scored on their first drive when Rasean Jacobs used passing tactics to move the ball down the field in a quick manner. When he was close enough, Rasean ran a yard into the endzone for the first touchdown of the night, making the score 8-0 after Makoa Bamba caught the two point conversion.

The second touchdown was scored right before halftime when Jacobs attempted a quarterback sneak but fumbled the ball. Despite the fumble, senior receiver William Sanders was there in the end zone to recover for a touchdown.

The Panthers received the ball to start the second half, and was able to score almost immediately after a huge kickoff return that set up an excellent field position. They scored the touchdown on the next play, which made the score a dominant 24-0.

One more small touchdown was scored before game was called. Rasean Jacobs was also responsible for this one. This made the score 30-0.

The Panthers came in and won 30-0, a very impressive job bouncing back from a huge loss the week before.