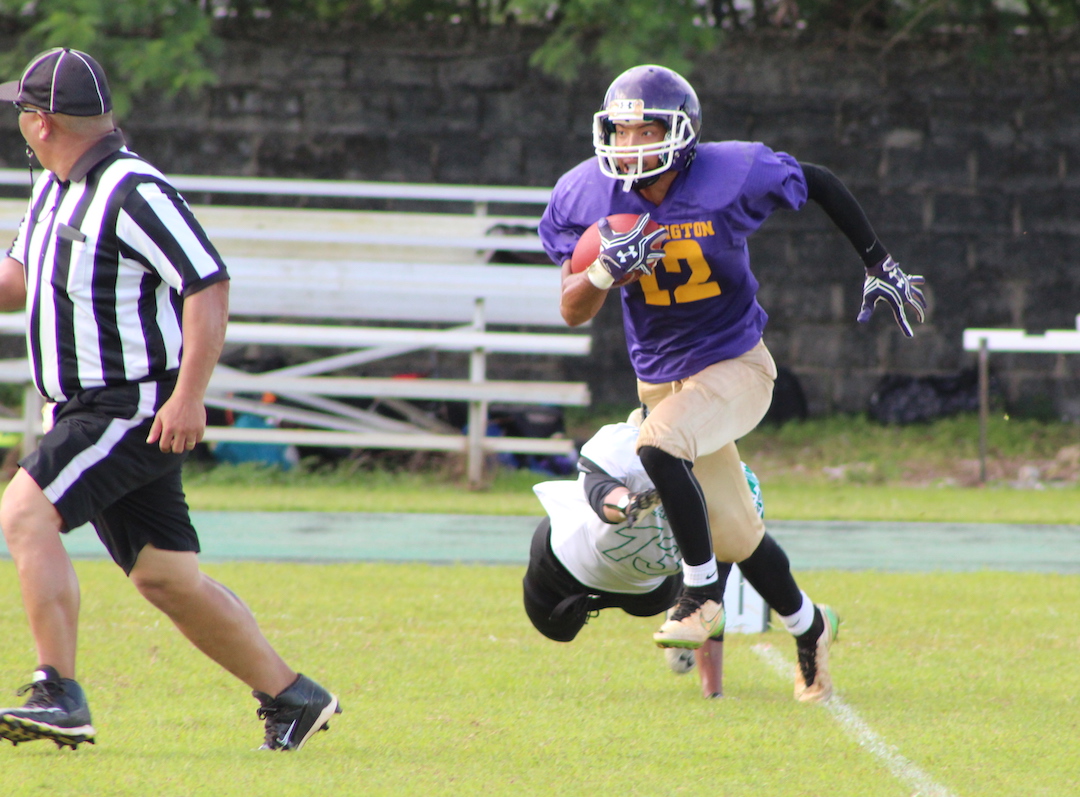 The GW Geckos scored three touchdowns exclusively through the air against the JFK Islanders Friday afternoon, on their way to a strong 22-8 victory. GW snapped a three-game win streak by the Islanders (3-2) as the Geckos improve to (3-1) on the season.

Jamanila has been just as remarkable as Macias, plucking any ball that floats in his vicinity. He’s become such a reliable ball hawk that coach Ryan Rios plugs Jamanila in as a defensive back. Even at that, Jamanila snatched away a pass for a timely interception in the 4th quarter to cement the win.

Macias tossed a short-distance 12-yard touchdown to Calvin Aguon on their first offensive series to quickly go up 7-0 with JFK turning the ball over on downs. Macias then kicked off the 2nd quarter with a deep bomb to Jamanila for a 76-yard score to go up 14-0 before making an injury exit.

Wendy’s Players of the Game Calvin Aguon and Aaron Jamanila.

Stepping in was Aguon, who struggled with interceptions early but settled in late. GW played patient football by running down the middle of the Islander defense repeatedly in the 3rd quarter. After two first down runs, GW ran a play action with Aguon hitting Jamanila in the end zone for a 20-yard score to go up 22-0.

“Someone else just had to step up,” said Aguon on coming in for Macias. “We just took what they gave us in the run game and they kept giving us the middle.”

JFK was also quarterback stricken with starter Allen Blend II making an exit to nurse an ankle injury suffered in the 1st quarter.

The Islanders avoided a shutout with a late score in the 4th quarter on a pass from backup Quintin Kakas to Chase Spotanski, also going successful on the 2-point conversion to cut the lead 22-8. The Islanders recovered the ensuing kick off to make the final five minutes interesting, but a turnover on downs inside the 30 prevented their comeback hopes.

Gecko Keanu Salas bounces out for a short gain. (photo by Robert Balajadia)

GW’s Francisco San Nicolas stretches out for a catch. (photo by Robert Balajadia)